How realistic is the idea of Russia-Ukraine peace talks at the Vatican?

ROME — Though arguably not at the center of its missionary scope, the Holy See has long been a key player in the world of diplomacy. This week, pressure mounted for the Vatican to host a much-needed summit between the presidents of Ukraine and Russia.

Speaking with Italian newspaper La Repubblica, Ukrainian President Volodymyr Zelensky said that he believes the Vatican could be the best place for a meeting with Russian President Vladimir Putin.

“Yes, perhaps, this could be the best place from all points of view. The Vatican is truly an ideal place for dialogue about peace. The Holy See is a global moral authority that always acts effectively as a mediator, as it is impartial and it inspires trust among all parties to the conflict. That is why the Apostolic Capital has often been used in history to resolve conflicts between states and build a peaceful future,” Zelensky said.

The Vatican is a moral force and though it may have baptized “citizens” in every corner of the world, it rarely, if ever, has an interest beyond that of forging peace: As an impartial third party, it has little to none political and economic interests, and even less so from a military perspective.

In fact, if a summit between Zelensky and Putin is to be held in Rome with the presence of the pope or any of his top diplomats, one idea that could be floated is that both countries invest in a fund aimed at combating poverty instead of spending money in weapons to continue what Pope Francis has described as a senseless conflict.

Argentine Cardinal Leonardo Sandri, who is familiar with the conflict as head of the Vatican’s Congregation for Oriental Churches, told the same newspaper that the Holy See could support the Minsk Group that is working to mediate a settlement of the Ukrainian conflict. 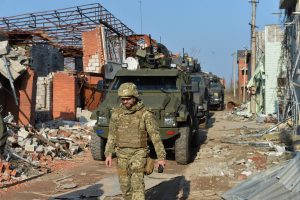 Pope Francis supports the implementation of the Minsk agreement, and, like Cardinal Sandri, is up-to-date with the Ukraine-Russia conflict: He has long had a personal interest in the country, dating back to his years as a seminarian when he got to know a Ukrainian priest who would end up being killed for his faith.

It should be noted that despite Zelensky’s public declaration, Cardinal Sandri’s symbolic greenlight and Pope Francis’ personal interest in an end to the seven-year-old conflict, the only ongoing war in Europe, no arrangements are being made so far — at least not officially.

With a pope known for taking many decisions motivated by personal experience, however, it’s not out of the realm of possibility: The Argentine pontiff witnessed the diplomatic role the Holy See can play in situations like the Beagle Conflict between Chile and Argentina in the 1980s, in which St. Pope John Paul II played a mediator role.

Pope Francis made an intervention of his own back in 2019 in an attempt to help forge a lasting peace in South Sudan. Then, he welcomed the country’s senior political and religious leaders for a spiritual retreat that doubled as an informal peace summit.

Since civil war broke out in South Sudan in December 2013, more than 50,000 people have been killed, though the most recent estimates put the number closer to 1.5 million, and nearly 4 million people have been internally displaced or fled to neighboring countries. Numerous attempts at peace have failed. Intense international pressure followed a 2018 peace deal, and on Feb. 22, 2020, a coalition government was formed. But peace still remains elusive.

However unstable the situation is, many observers point to Pope Francis’ historic gesture of kissing the feet of his guests and his dangling of a papal visit as a carrot if peace lasts, as part of the foundations to what little peace there is now.

Venezuela and Nicaragua are two South American countries that have asked, at different moments in the past three years, for the Holy See to help mediate in their respective crisis. Their leaders, Nicolas Maduro and Daniel Ortega, have presided over national crises marked by accusations of corruption, economic strife, and social turmoil that have produced hundreds of violent deaths and millions of migrants and refugees.

The Holy See has expressed willingness to mediate, and the papal representatives in both countries have sat down in the many attempted dialogue efforts, none of which amounted to much. Perhaps a summit in the Vatican could help speed things up, particularly given how close both countries are to the pope’s heart and that neither country is on the list of potential papal trips in the near future.

Last, there’s the largely ignored conflict in Cameroon, known as the “Anglophone Crisis.” Nearly five years ago, English-speaking lawyers and teachers began striking over efforts to change the common law legal system and British-based schooling system the two Anglophone regions inherited from Cameroon’s colonial era. The majority of the country is French-speaking.

The protests were violently suppressed by the central government, leading to a separatist insurgency intent on establishing an independent country called “Ambazonia.”

The fighting has killed at least 3,500 people and forced more than 1 million from their homes, according to the United Nations. The separatists have also enforced a school boycott in the two provinces they control, keeping children from receiving an education for years.

Since the death of Cardinal Christian Tumi April 2, the situation risks becoming more unstable.  He was one of few nationwide respected voices calling for a just solution to the crisis, saying a return to a federal system of government was the best path to follow. Many believe that, had President Paul Biya listened to the prelate, the conflict would now be resolved.

In all of these countries, the Holy See has no particular interest beyond the protection of the local Catholic population and the many initiatives it carries out — from parishes to Caritas offices, schools, hospitals, and formation centers.

Yet the long-dating Christian presence in South Sudan, Venezuela, Nicaragua, and Cameroon make the Vatican a perfect third-party dialogue facilitator. The question then becomes, are the leaders of these countries willing to put the common good ahead of their personal interests?