How much does Mexico’s president really think like Pope Francis?

His comments came during an Aug. 5 press conference in which the leader, dubbed “AMLO” by Mexicans, said that he “likes a lot” the thinking of Pope Francis, “a global spiritual leader of the first order,” because he often addresses social problems.

AMLO pointed to issues such as poverty, inequality, youth, women, human right violations and opposing a materialistic lifestyle, as core priorities of the pontiff — and reasons why Mexico’s “conservatives” should read Pope Francis’ teachings and homilies. 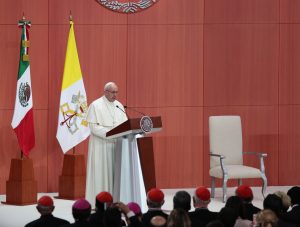 “Hopefully, the conservatives of Mexico will read him,” AMLO said. “ ‘Defending the poor is not being a communist, it is the center of the Gospel,’ ” he added, repeating a phrase the pope has used several times.

The presidential remarks did not come out of nowhere: They were a direct response to an essay penned by the 87-year old retired Archbishop of Guadalajara, Cardinal Juan Sandoval Íñiguez, who had written earlier last week that Mexico is headed toward communism under the “atheist” government of AMLO.

Titled “The Communism that is Coming to Mexico,” the article published on the Archdiocese of Guadalajara’s official website identifies several indications to back the cardinal’s assertions: from taking control of the nation’s assets and economy, to assuming a dictatorial role by controlling the content of the educational system, and promoting gender ideology, “one of the biggest and most absurd aberrations” regarding the family.

According to the cardinal, communism and socialism are virtually the same thing, with the first being more openly violent and the second more ideological in its implementation.

In the essay, Cardinal Sandoval speaks of a “New World Order” that seeks to weaken and make nations poorer, so that when citizens have no personality, they can be easily handled. This, he wrote, “is the reality that is coming to Mexico, with our passiveness, because we don’t accept the gravity of the problem. How are Cuba, China, Nicaragua, Venezuela?”

Pope Francis has, in fact, said several times that caring for the poor, those who are in the outskirts of society and marginalized, is not communism but following the Gospel. For instance, he did so in his book-length interview “This Economy Kills,” published in 2015. Once famously blasted by American pundit Rush Limbaugh for advocating “pure Marxism,” Pope Francis in the interview complained that he can’t quote the teachings of the early Church Fathers without being accused of giving a Marxist homily.

But what AMLO ignores is that while Pope Francis has made caring for the poor one of the social cornerstones of his papacy, he’s also been very critical of many of the things the president supports, and which were highlighted by Cardinal Sandoval, who chose to keep the pontiff out of his essay.

Take gender ideology and education, for example. AMLO’s political party started a campaign last year to legalize abortion; attempted to amend Mexico’s constitution to open the doors to introducing assisted suicide, same-sex marriage, and legalizing the use of drugs for recreational purposes. Among other things, the new constitution would have interpreted human rights with a “gender perspective” and make all family units equal. In Mexico City, his party made it legal for minors to change their sex on their birth certificate.

Though Pope Francis is often associated with a “who am I to judge” approach to issues of gender and sexuality, he has consistently stuck to the teachings of the Catechism of the Catholic Church when it comes to condemning the sin, though not the sinner. He’s called gender theory — which is based on the idea that one’s sexuality is a social construct that can be self-defined — part of a “global war” against the family; approved the release of a Vatican document critical of gender education in Catholic education in 2019; and back in 2015, while he was speaking off the cuff in the Philippines, he referred to support for same-sex marriage as “ideological colonization … that is trying to destroy the family” and reaffirmed Church teaching on artificial contraception.

The issues on which Catholics of all political stripes can ask AMLO to heed his own advice and read Pope Francis are endless, ranging from prison reform to corruption to generating employment to climate change, and yes, fighting poverty by addressing the root causes of inequality. 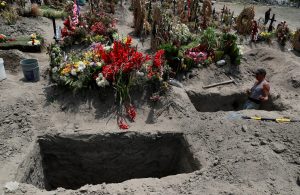 But Pope Francis is often labeled as a man who leads through his gestures, and there was a very telling example AMLO didn’t follow back in March: the shutting down of the Vatican by the leader of 1.3 billion Catholics as part of an effort to slow the spread of a virus that posed the most danger for the elderly, the disabled, the sick, and the poor. Meanwhile, the Mexican president was insisting to his countrymen that nothing was going on.

Now that the proverbial curve has flattened in Italy and a semblance of normalcy slowly returns to daily life, Pope Francis has announced a series of reflections on life after the pandemic, accompanied by a task force to suggest ways the Church — and the world — should face the new socio-economic-cultural reality that lies ahead.

Yet as recently as June, as Mexico surpassed 17,000 reported coronavirus-related deaths, AMLO released a video in which he made no mention of serious public policies or new health measures to contain the pandemic, offering instead a litany of banalities, suggesting Mexicans “try to be happy,” “be free,” and “enjoy the sky, the sun, and fresh air.”