As Europe slowly but steadily re-opens after coronavirus closures, Catholics across the continent are being allowed back to Mass. However, organized groups of pilgrims in large numbers are still a long way off, leading the famed Shrine of Our Lady of Lourdes to organize an online pilgrimage and crowdfunding drive to try to make up a $9 million deficit.

“Lourdes needs the world, and the world needs Lourdes,” said Monsignor Olivier Ribadeau Dumas, rector of the Sanctuary of Our Lady of Lourdes in southern France.

“Lourdes United” will take place July 16, and it will include a 15-hour live session, in different languages, with Masses, processions, rosaries and other prayers. The date is significant: It’s the anniversary of the last Marian apparition recorded in Lourdes.

While the Vatican has approved devotion to the apparition and installed a feast day to Our Lady of Lourdes, it and other apparitions still are considered “private revelations” and thus not mandatory for Catholic belief.

“The Grotto of Lourdes, if it could testify, would only speak of humanity!” Dumas wrote on May 16, when the shrine re-opened. “What peace found, how many graces received in this ‘melting pot’ of humanity, how much suffering deposited, how many emotional thanks expressed by millions of pilgrims since 1858.”

“In Lourdes, countless volunteers have found meaning in their lives through fraternity in interaction with sick, disabled or fragile people,” he added. “It is also a school of life for tens of thousands young people who can express their faith in an international atmosphere.”

According to a press statement released this week, Lourdes United will bring together all those who “from every corner of the world, see Lourdes as a beacon of faith, commitment, sharing and hope.”

“The world is facing an unprecedented economic and social crisis, combined with a strong desire to find meaning in everything that has happened so far,” the statement says. “The fraternity, generosity and hope that the Shrine has brought with it for 162 years has never been so essential.”

“Hundreds of thousands of messages, cries for help, cries of suffering, but also testimonies of hope continue to reach Lourdes, hearts beating with prayer,” the organizers note.

The website of the online event also says that Lourdes without pilgrims is a Lourdes “without resources to carry out its mission, to maintain the entire site, to guarantee its durability and the jobs of its 320 employees.”

Reports suggest the entire Lourdes area is struggling, as hotels, restaurants and souvenir shops have become the central industry in this small town. With only 14,300 inhabitants, it has the second largest hotel capacity in France after Paris, with 22,000 beds.

The pandemic forced the shrine to close for more than two months, which hadn’t happened even during two world wars. 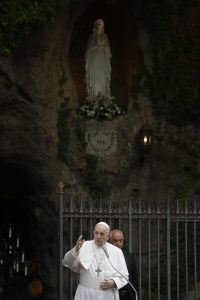 Pope Francis delivers his blessing at the end of a rosary in Vatican gardens Saturday May 30, 2020. In background is a reconstruction of the Lourdes’ grotto in southern France, where the Virgin Mary is alleged to have appeared eighteen times to Bernadette Soubirous in 1858. Pope Francis is reciting a special prayer for the end of the coronavirus pandemic surrounded by a representative sampling of people on the front lines in his biggest post-lockdown gathering to date. (Alessandra Tarantino/AP via CRux)

“Some three thousand daily faithful are bread crumbs compared to the thousands we were used to,” Dumas has been quoted as saying by several French and Italian news outlets.

Many things the shrine offers physical pilgrims will also be available online, and the plan is for people to feel as if they’re actually in Lourdes. Alas, candles and Mary-shaped bottle of holy water, as well as bathing in the reportedly miraculous waters, will have to wait.

Organizers are presenting this as the first world-wide online pilgrimage, and the scope is to help address a $9 million deficit. It’s worth noting that entrance to the shrine is always free, as are all the activities organized in the sanctuary – including the famous baths, where thousands of sick pilgrims submerge themselves every month.

However, visitors can buy candles and bottles to store holy water, and there are donation boxes throughout the shrine that help with the maintenance of the site.

In 1858, a 14-year-old girl called Bernadette Soubirous said she saw the Mother of God in a series of apparitions.

Soubirous was told that a spring would appear where she saw the Virgin seven times, and that the water would help heal people. The water appeared, and ever since, an estimated 200 million people have visited the shine and the “Domain,” as the surrounding area is known.

Talking about the shrine, Dumas said that it’s very important for those who minister there to “bring together pilgrims from all over the world for a moment of common prayer, to rekindle hope after the COVID-19 period.”

“It will be a spiritual pilgrimage that has the aim of showing everyone that Lourdes is a sign of peace, faith and hope for the whole world,” he said.

The full program will be broadcast via TV, radio and social media, and will include testimonials from priests, members of religious orders, lay people, doctors, journalists, politicians, believers and non-believers, who will share what Lourdes means to them. There will also be speakers on solidarity, fraternity, commitment and volunteering, in between prayer sessions and live music.

Our Lady of Lourdes, Pilgrimage