During his weekly Sunday Angelus address on Feb. 14, Pope Francis publicly thanked the Colombian government for its decision to naturalize almost 2 million Venezuelan migrants fleeing years of political and social instability in what is one of the worst humanitarian crises of modern times.

Not one to call out countries when he’s criticizing, Pope Francis refrained from naming President Nicolas Maduro or the country he leads. In a span of two decades, Venezuela has gone from enjoying modest prosperity thanks to having one of the world’s largest oil reserves, to becoming a country with one of the world’s worst inflation rates that has to import oil.

As a result of a crisis that exploded after the death of Maduro’s predecessor, fellow socialist Hugo Chavez in 2013, the United Nations today estimates that there are more than 5.5 million Venezuelan migrants and refugees in the world, most of them in neighboring countries such as Colombia.

In Colombia there are 1.7 million of them, where President Iván Duque Márquez announced on Feb. 8 an initiative that will grant a 10-year protection statute to these people. The plan grants permission to stay to those who entered the country before Jan. 31, and apply for a permanent residency, which will in turn make it easier for them to find permanent jobs.

Duque, a conservative whose government enjoys close ties with the United States, characterized the decision in both humanitarian and practical terms, urging greater compassion for migrants around the world. 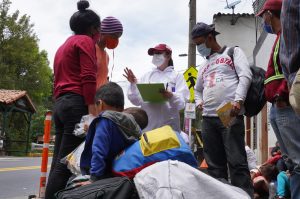 “Migration crises are by definition humanitarian crises,” he said in a speech announcing the decision. He also stressed that the plan would make it easier for officials to identify those in need as well as track down anyone who breaks the law.

In his Angelus address, Pope Francis went out of his way to note that Colombia’s move to protect, welcome, and integrate migrants is being carried out “not by a super wealthy developed country,” but by one that has endured decades of violence.

“But with this problem they have had the courage to look at those migrants and to create this statute,” the pope said.

The pope’s public “thank you” statement came after the country’s bishops issued one of their own soon after Duque’s announcement.

Left unsaid in Pope Francis’ glowing praise of Colombia’s decision is its stark contrast from the approaches taken by other South American countries.

Last month, for example, Peru sent military tanks to its border with Ecuador to stop migrants — many of them Venezuelans — from crossing into the country, leaving hundreds stranded. Both countries, as well as Chile, have taken tough measures to prevent the arrival of more Venezuelan migrants.

And while they were surely political considerations at play in Duque’s decision, the pope’s words are a reminder of what the Argentine pope’s advocacy for migrants can look like in the real-life world of global politics.

The estimated 1.7 million Venezuelans living in Colombia today are not going anywhere: they’re not living in refugee camps that the government or the United Nations can close when the conflict is over. They are already living in Colombia and trying their best to integrate in a society that is not indifferent to the realities those led by Maduro flee.

Pope Francis, a son of Italian immigrants himself, is also convinced that the reality of migration is not changing, as the forced displacement of people fleeing hunger, war, poverty, and climate change didn’t even stop in 2020, when a global pandemic seemed to stop the world in its tracks.

The pope has made clear that welcoming immigrants should not amount to “open borders.” But ever since his election to the papacy in 2013, he has gone to lengths to amplify the experiences of migrants, refugees, and newcomers as part of the Church’s defense of the dignity of life, and to decry the perilous, degrading, and intolerable conditions they must often endure.

Likewise, Colombia is not opening its borders to an unlimited number of foreigners, but is not separating families at the border or deporting people en masse either.

Instead, Duque is acknowledging that they are people with a name and dreams, so ready to work for a better future than they willingly risked their lives walking for weeks to reach what they thought was a better option. With no major cultural barriers — both countries speak Spanish and have cultures rooted in a common history — the biggest hurdle Venezuelans face to integrating is legal, and Duque just lifted it.

“Protecting these brothers and sisters is a moral imperative, which translates into adopting juridical instruments, both international and national, that must be clear and relevant; implementing just and far-reaching political choices; prioritizing constructive processes, which perhaps are slower, over immediate results of consensus; implementing timely and humane programs in the fight against ‘the trafficking of human flesh’; which profits off others’ misfortune; coordinating the efforts of all actors, among which, you may be assured will always be the Church,” Pope Francis said in 2017.

Colombia announced it is willing to do all of this, which is why, the last Sunday before Lent, they got a public pat on the back from the leader of the world’s most important soft power. The promise of help from the country’s thousands of priests, religious sisters, and ministers, though unvoiced, was also there.