With the number of coronavirus victims growing throughout Latin America, life for the Catholic Church has also been affected.

With few security measures ordered by the national government to prevent the spread of COVID-19 in the weeks after the first confirmed positive case, it was little surprise when Mexico surpassed 30,000 deaths on July 6.

Among the dead are 34 priests, five deacons and two religious sisters, including a priest from the National Shrine of Our Lady of Guadalupe, one of the largest Catholic pilgrimage centers in the world. At least eight other workers at the shrine have also tested positive for the coronavirus.

The faithful in Mexico have not been able to attend Mass since March 17, but the Catholic Church has promoted various initiatives to allow people to participate in their faith, many of which focus on Morenita, the image of Our Lady of Guadalupe.

But Church leaders have also reminded the people of the dangers of the pandemic.

“If you have any respect for the opinion of a Catholic priest, I would like to say the following to you: I’m a witness to the number of people who’re dying due to the virus,” said Father Roberto Funes, one of the “coronavirus ministers,” trained to minister in hospitals where people with COVID-19 are treated. “In the hospital I’ve tended to hundreds and hundreds of people with the virus, many of whom have died.”

In the video, the priest reminded Catholics that not caring for one’s health is a sin.

“I urge you to have an attitude of understanding in this situation and of faith as well,” he says in the video, wearing a facemask. Funes also said that following the guidance given by health authorities does not mean that a person doesn’t trust in God.

“On the contrary, we have to do it and we have to take care of our lives because it is a gift that God gave us and it’s the way by which many will discover the blessings that God has given us.”

Last week in Argentina, the bishops launched a campaign to raise funds that will allow the institution to sever its remaining ties with the State.

After the debate to decriminalize abortion in 2018 and calls for the “separation” of the Church and the State, the Argentine bishops conference announced its plan to “progressively” dispense with the nearly $2 million the government allocates every year to pay the salaries of the country’s bishops. 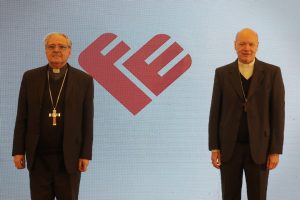 In a transmission followed by thousands of people from all over the country, Bishop Oscar Ojea, President of the Argentine Episcopal Conference and Bishop Guillermo Caride, President of the Episcopal Commission for Sustaining the Mission of the Church, presented Programa Fe on June 30. The program aims to make the Church in Argentina self-sustainable. (Programa Fe via Crux)

Though the public money represents just 10 percent of the local church’s annual budget, it’s vital for the poorest dioceses.

After the Church stops receiving public funds, it will remain the second largest provider of education, healthcare and social aid, after the State.

The bishops commissioned a study on the public perception of the role of the Catholic Church in Argentina, and found most people associated the Church with social assistance, but didn’t know how these  programs were financed, nor the extent of Church efforts to feed the hungry, give shelter to the homeless and provide assistance where needed.

This study led to the launch of Programa Fe, a program to help raise funds for the Church’s social programs, but also to better communicate where the money raised goes. People can choose to donate to a specific diocese, such as Añatuya, one of the country’s poorest, or to a specific parish.

“The mission of the Church is to be at the service of the people of God,” says the website. “It’s reaching where others cannot. It’s taking responsibility for educating the youngest and assisting older adults. It’s to provide a plate of food or extend a hand to those who need it. Our mission, ultimately, is to transform the society in which we live through the noble and current values of the Gospel.”

One of the continent’s largest Marian pilgrimages has been canceled due to the COVID-19 coronavirus pandemic. Sort of.

Civil, ecclesiastical, military and police authorities of the province of Loja, in Ecuador, recently came together to discuss the annual pilgrimage of the Virgin of El Cisne. For the past 150 years, from August 15 to August 20, thousands of faithful have accompanied the image during a 45-mile walk from it’s home shrine to the cathedral of Loja, that then keeps the image until Nov. 1.

Last year, around 500,000 pilgrims participated. In light of the pandemic, it was decided that the image would travel by car, following the usual route and spending the night in San Pedro de la Bendita and Catamayo, as is customary.

The traditional Mass held for the military will not be held, but the people will be represented, according to the explanation given by diocesan authorities. During the five-day car pilgrimage, the image of the Virgin will wear different outfits, representing peasants, the police, the military and finally, doctors, people who’ve been on the frontlines during the crisis.

“Faith has to remain strong, but we have to be obedient during this situation we’re living through,” said Bishop Walter Heras of Loja.