What Latin America’s leftward turn means for the Church

While Pope Francis has just seen the election of a right-wing government in Italy, politics in his former backyard are leaning the other direction.

Brazil’s Luiz Inácio Lula da Silva — known simply as “Lula” — was returned to office on Oct. 30, after narrowly defeating sitting president Jair Bolsonaro by 50.9% to 49.1% in the runoff poll.

Brazil’s leftward turn means all of the major countries in the Americas are led by progressive-leaning parties, from Justin Trudeau’s Liberal Party in Canada to Gabriel Boric’s Social Convergence in Chile.

Given almost all of these parties oppose the Catholic Church on issues such as gay marriage, abortion, and other life issues, some fear the Church could suffer under this “red wave” in the Americas. (Of course, for most of the world, the color red is associated with the left, and blue with the right.)

During his campaign, Bolsonaro warned that Lula’s return to power would turn Brazil into another Nicaragua or Venezuela, where leftist administrations have persecuted the Catholic Church and attacked the hierarchy as being opposed to the state.

However, Bolsonaro’s dire predictions have fallen on deaf ears for most Catholics in the country, especially Brazil’s bishops.

It is important to remember that “the left” — like “the right” — is a broad category, and a leftist government in Venezuela is far different than one in Vermont.

In Brazil, Lula’s Workers Party grew out of the Liberation Theology movement, and saw itself as a counterpoint to the Stalinist unionist movement popular in the early 1980s. Its ideology is different from that of Nicaragua’s President Daniel Ortega, who had previously served as president during that same era in a Soviet-backed regime.

Moreover, the same ideology that animates Lula also animates many of the people who work in the offices of the Brazilian bishops’ conferences (a fact not lost on Bolsonaro, who often accused the bishops of supporting the opposition).

No one in the Catholic hierarchy in Brazil fears some sort of anti-Catholic regime under Lula. Many of them abhorred the right-wing populism of Bolsonaro, especially with his attacks on indigenous rights and disregard for environmental protections supported by Catholic teaching.

Hence, it’s likely that this relief at Lula’s return to power by many of Brazil’s bishops is most likely also felt by the Holy See. Bolsonaro often clashed with the Vatican, especially during the 2019 Amazon Synod. The Brazilian president was riled by Pope Francis’ assertion that the rainforest belonged to the world, despite the fact that the majority of it was in Brazil. 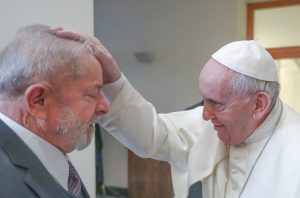 Bolsonaro received political support from loggers and ranchers who wanted to develop parts of the Amazon, and his administration was noted for its lack of concern for the ecological protection of the region and its indigenous peoples.

Pope Francis — famous as a pope of gestures — was also seen as partial to Lula on a personal basis. The pontiff wrote to the former president in 2019, when he was detained in prison on corruption charges. The pope also met with Lula for more than an hour at the Vatican in 2020.

When Bolsonaro sounded the alarm about Brazil becoming a new Nicaragua or Venezuela, he failed to notice they are the exception as opposed to the rule.

Pope Francis has always seemed more at ease with left-wing regimes in Latin America than their right-wing counterparts.

In 2015, the pontiff visited Bolivia to host the World Meeting of Popular Movements under the smiling eye of Bolivia’s president at the time, leftist Evo Morales, who famously gave the pope a crucifix made from a hammer and sickle.

Morales and Ecuador’s Rafael Correa were the only heads of state invited to the Vatican in 2016 for a symposium on Catholic Social Teaching. (Also on the invite list was Bernie Sanders, who was running for president at the time.)

Why does the pope seem more comfortable with the left in Latin America?

One reason is historic: The dictatorships in South America when Pope Francis was growing up were right wing, not left wing. Bolsonaro, a former army officer, was also an apologist for the military dictatorship that ruled the country from 1964 to 1985. Conservatives in other countries, such as Chile and the pontiff’s own Argentina, also often have ties with figures from their country’s dictatorships.

Another is common ground: Pope Francis has put the environment and the poor — especially migrants — at the top of his agenda, and the left-wing governments share this emphasis, at least rhetorically.

Finally, the pope has expressed serious concern about the “populism” of the modern right, claiming it seeks “easy answers” and that it leads to “skepticism about democracy.”

So, from Rome’s point of view, the “red wave” in the Americas isn’t a deluge to be feared, but a force to be harnessed. If it can be ridden remains to be seen.