The leader of the Ukrainian Greek Catholic Church said on Friday that the war risks creating an ecological disaster as well as a humanitarian catastrophe. 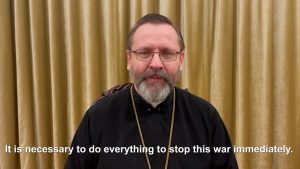 Archbishop Sviatoslav Shevchuk of Kyiv-Halych, head of the Ukrainian Catholic Church, speaks from Kyiv, Ukraine, in this still image from a video message released March 4, 2022. Archbishop Shevchuk condemned Russia's attack on a nuclear power plant in Ukraine, saying that it could lead to an ecological disaster 10 times worse than the Chernobyl nuclear disaster. (CNS photo/Ukrainian Catholic Church)

“This is not only becoming a humanitarian catastrophe before our very eyes. It is an irreversible attack on God’s creation that for decades, for centuries, will be impossible to correct. Ukraine already experienced Chernobyl. Now it stands on the threshold of a new atomic threat that can be 10 times worse.”

A fire broke out overnight at the Zaporizhzhia nuclear facility, the largest of its kind in Europe, amid Russian shelling.

During the offensive, Ukrainian Foreign Minister Dmytro Kuleba said that if the plant blew up, the disaster would be “10 times larger” than Chernobyl. The nuclear accident at the Chernobyl Nuclear Power Plant in northern Ukraine on April 26, 1986, is regarded as the worst in history. 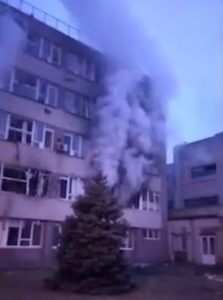 Smoke billows from a building at the entrance to the Zaporizhzhia nuclear power plant, Europe's largest, after attacks by invading Russian forces started a fire at a training area, in Enerhodar, Ukraine, March 4, 2022, in this still image obtained from video. (CNS photo/Courtesy of State Emergency Services of Ukraine/handout via Reuters)

The blaze was put out and the plant in southeastern Ukraine was working normally on Friday, reported Reuters.

Shevchuk recorded his latest video message as Russian forces continued to advance on the capital Kyiv, where the major archbishop is sheltering with others under the Ukrainian Greek Catholic Cathedral of the Resurrection.

He expressed his gratitude to Ukrainian soldiers, saying that it was thanks to them that “on this ninth day of the war, we are still alive.”

The U.N. refugee agency reported on March 3 that more than 1.2 million people have fled Ukraine, a country of 44 million, since Russian President Vladimir Putin ordered a full-scale invasion on Feb. 24.

“This morning I received news that already almost one million people have left Ukraine,” Shevchuk said.

The website of the Russian Orthodox Church reported on March 3 that Patriarch Kirill of Moscow discussed the conflict with Archbishop Giovanni d’Aniello, the pope’s representative to the Russian Federation.

Kirill, who is considered close to Putin, said that his Church sought to “take a peacemaking position” amid conflicts, according to the website Pravmir.com.

“Because the Church cannot be a participant in a conflict — it can only be a peacemaking force,” the Russian Orthodox leader explained.

He reportedly also said that the Vatican’s “moderate and wise position” on international issues was consistent with the Russian Orthodox Church’s stance.

“It is very important that Christian Churches, including our Churches, voluntarily or involuntarily, sometimes without any will, would not become participants in those complex, contradictory tendencies that are present on the world agenda today,” he commented.

Concluding his video message, Shevchuk noted that the Archangel Michael is the patron saint of Kyiv.

“We perceive today that the Archangel Michael together with the whole Heavenly Host is fighting for Ukraine,” he said.

“So many people from throughout Ukraine are turning to me saying that they saw luminous angels over the land of Ukraine.”

“Today we pray: O Archangel Michael and all the Powers of Heaven, fight for Ukraine! Cast down that devil who is attacking us and killing us, bringing devastation and death!”