Will three women really shake up the Vatican’s bishop-making process?

ROME – On July 13, a glass ceiling in the Vatican was broken when Pope Francis appointed three women to the Dicastery for Bishops, giving them seats around a key decision-making table.

The Dicastery for Bishops is responsible for advising the pontiff in the selection of new prelates  based on the information gathered by the Vatican’s embassies throughout the world. It is led by Canadian Cardinal Marc Ouellet and staffed with many cardinals as advisers.

The three women handpicked by the pope are: Italian Franciscan nun Raffaella Petrini, secretary general of the Governorate of Vatican City State; French nun Yvonne Reungoat, former superior general of the Daughters of Mary Help of Christians (Salesians); and Argentinian Maria Lia Zervino, a member of the Association of Consecrated Servant Virgins and the president of the World Union of Catholic Women’s Organizations (WUCWO). 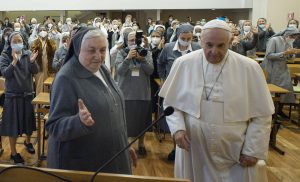 Sister Yvonne Reungoat, then superior of the Salesian Sisters, is pictured with Pope Francis during a meeting with members of the order in Rome in this Oct. 22, 2021, file photo. Sister Reungoat is one of three women named to the office that helps the pope choose bishops. (CNS photo/Vatican Media)

Just as he’s done with the elevation of cardinals, the pope “forgot” to let them know that they would be appointed. According to the women, they found out after receiving congratulatory messages from friends.

Widely acknowledged as a historic leap, Pope Francis’ decision could produce a culture change in one of the Vatican’s most influential offices, since the appointment of a bishop has a long-term impact on the local and universal Church.

However, for these appointments to be truly significant, their voices will need to carry the same weight as other members of the department when giving explanations as to why a candidate should become a bishop or why someone should be taken out of consideration. Otherwise, this will be viewed as nothing more than a move to fill a quota.

Though Zervino is reluctant to admit she is friends with Pope Francis, the two have known each other for a long time. In her current role, she is connected to some of the world’s most influential Catholic lay women from every continent.

She described her appointment as a “shock,” but is ready for this new task, trusting Cardinal Ouellet’s promise to her that the three women will have “complete freedom.”

There is no doubt that their appointments bring much-needed diversity to the Vatican. The Catholic Church has long taught that men and women complement each other in their differences.

Sister Petrini, Sister Reungoat, and Zervino could potentially represent an independent, non-clerical filter in a selection process that in past decades has been tragically lacking in quality. 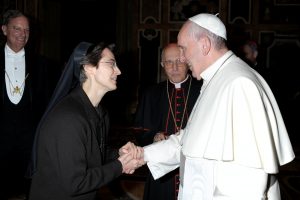 Pope Francis greets Sister Raffaella Petrini, an Italian member of the U.S.-based Franciscan Sisters of the Eucharist who is secretary-general of the office governing Vatican City State, at the Vatican Dec. 3, 2015. (CNS photo/Vatican Media via Reuters)

They will also have women in mind when they consider worthy shepherds. These are three women who have long advocated for half the people of God to be represented and heard, always in accordance with both Church teaching and tradition.

The growing presence of women in Vatican offices began during the reign of Pope Benedict XVI, who greenlighted an edition of the Vatican’s newspaper dedicated to and written by women. It was in this monthly publication that religious sisters began to speak up on the abuses they have suffered at the hands of bishops. Pope Francis has continued to appoint women to key positions which have not been held by women or laity before.

Yet this shift will only be relevant if it has a trickle-down effect to diocesan offices and parish councils, and if these “first” women manage to leave an imprint that lasts beyond their own tenure.

As the list of women, both religious and lay, who are being appointed to major Vatican roles continues to grow, it is important to remember that change does not happen automatically. The paths for their contributions may be opening up, but there must be a reciprocal opening in the minds and hearts of those who listen to them.