The neighborhood of ivy-draped two-story buildings, cobblestoned streets and Marian shrines adjacent to St. Peter's Basilica is perhaps best-known today for serving gelato and pizza to tourists visiting the Vatican.

History, however, knows the "Borgo" -- as the zone is called by locals -- as a village of ecclesiastical artisans who produce and restore religious articles for the Vatican and wider church.

With the rising costs of rent in central Rome, the abandonment of the artisanal trades by the younger generation and now the economic blow caused by the COVID-19 pandemic, the tradition and ethos of the once vibrant neighborhood of workshops and craftsmen are disappearing.

"A lot of workshops will be lost," said Ety Cicioni, a tailor who produces the uniforms of the Swiss Guard and has restored garments for the past three popes. "You will struggle to contain the costs of keeping a workshop in this area." 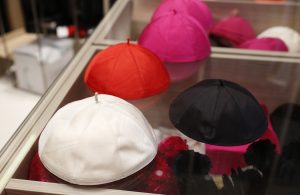 Zucchettos are pictured in the shop of Ety Cicioni, a tailor who produces uniforms for the Swiss Guard and clerical wear, near the Vatican in Rome April 29, 2021. (CNS photo/Paul Haring)

The trend, he explained, seems inevitable: younger people don't want to take up the family business -- which in some cases spans generations -- and those who continue will gravitate toward "industrialized" production and higher profit margins.

Cicioni, whose shop and studio "I Sarti del Borgo" (The Tailors of the Borgo) saw a 25% profit loss due to the pandemic, hopes that the revival of something like a medieval guild could help those in the traditional trades.

"I would like to try to unite and create a sort of hub where, with the excellence of craftsmanship, we can face these challenges together," he said. "We can only do it if we unite, but at the moment it's very hard."

In February, the Italian news agency ANSA reported that COVID-19 had caused 20% of Rome's artisanal businesses to close permanently. In response, the city is considering creating two "ad hoc" districts in the Rome neighborhoods of Testaccio and Tor di Nona to help artisans get back on their feet.

Artisans who serve the church do have an advantage when the economy comes to a halt, however. 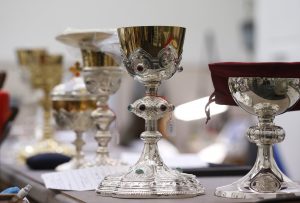 Chalices are pictured in the "Savi Gioielli" (Savi Jewelry) workshop near the Vatican in Rome April 15, 2021. (CNS photo/Paul Haring)

"Working for the church hasn't stopped, because the church continues its work and priests continue to celebrate Mass. Bishops continue to be appointed," said Piero Savi, a jeweler who, with his brother Claudio, has produced papal crosiers, cardinals' rings and episcopal pectoral crosses.

"The only thing that has changed is that it's more difficult, and the turnaround time is longer," he said, since the sourcing of materials has been slowed down by the pandemic's toll on the global supply chain.

"Savi Gioielli" (Savi Jewelry) has a large American clientele, in part due to the influence of Cardinal James M. Harvey, who served as prefect of the Papal Household under St. John Paul II and Pope Benedict XVI. Many U.S. cardinals and bishops are pictured on the walls of the workshop wearing regalia produced or restored by the brother jewelers.

In the nearby Prati neighborhood, Roberto Scura, who has restored books and manuscripts for a variety of ecclesiastical clients, including Rome's Pontifical Urbanian University and the Knights of Malta, said that customers are still reticent to enter shops even though COVID-19-related restrictions are being relaxed. 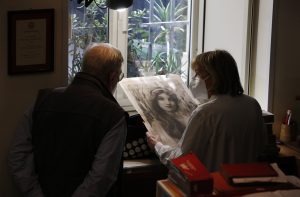 A customer works with an employee in the workshop of Roberto Scura, who restores books and manuscripts for a variety of ecclesiastical clients, in Rome May 3, 2021. (CNS photo/Paul Haring)

"Clients are not really going out as much; they are a bit tense, and so they don't often come bringing work," Scura said.

"I hope that, slowly, everything will start again and that it goes well," he said.

According to the artisans interviewed by Catholic News Service, even if the pandemic were to disappear in a miraculous instant, the traditional trades face an uphill struggle to stay profitable.

Due to the advance of computerized methods in jewel production, for example, the essence of craftsmanship is under attack, Savi said.

Before, "the workshop was the domain of the craftsman and he was its master," he said. Now, the major software companies "have made the craftsman a user of electronic programs, so he is no longer the master, the master is elsewhere."

"You work or you don't work according to the will of these new masters," Savi said.

On top of that, Savi explained the challenge of getting the smartphone generation, accustomed to social media influencer-level success, patient and interested enough to learn a traditional skill.

"In a world where speed and quickness are essential values, it seems like a waste of time" to young people, he said. 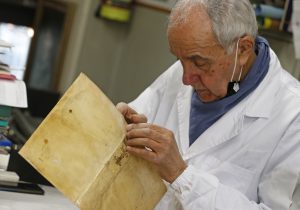 Roberto Scura, who restores books and manuscripts for a variety of ecclesiastical clients, repairs a book cover in his workshop in Rome May 3, 2021. (CNS photo/Paul Haring)

Despite the challenges, the artisans praised the personal -- even spiritual -- rewards of working with one's hands.

"When I work, I just get into it," Scura said. "The phone will ring but I won't hear it, because I'm totally involved in the work I'm doing. The work engrosses you."

Cicioni said the fact that garments he sews will be donned by those representing the church adds another positive dimension to his labors.

"There is something more, let's say, a value beyond the human value; there's a faith value when doing these things," Cicioni said.

Pope Francis underlined such spiritual benefits in work in his 2020 apostolic letter "Patris Corde" ("With a father's heart"), which marked the 150th anniversary of St. Joseph being declared patron of the universal church.

"Work is a means of participating in the work of salvation, an opportunity to hasten the coming of the kingdom, to develop our talents and abilities, and to put them at the service of society and fraternal communion," the pope wrote.