A friendly soccer match sponsored by the Vatican to promote fraternity and an end to racial discrimination ended in a tie.

Played at the Lazio professional soccer club's training center, the match Nov. 21 between the Vatican and the World Roma Organization ended with a score of 7-7.

Proceeds collected from the match went to the "Kick Out Exclusion" program, which is sponsored by the Diocese of Rome and aims to involve Roma children in youth soccer clubs. 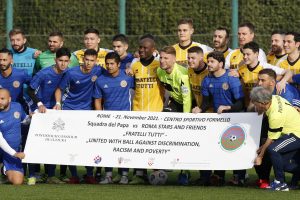 Ciro Immobile, center, a forward for the Lazio professional soccer club, is pictured with members of the Vatican team, "Fratelli Tutti," and a team from the World Roma Organization prior to a friendly match at the Lazio Training Center in Formello near Rome Nov. 21, 2021. The match was played to promote inclusion, including those in Gypsy communities. (CNS photo/Paul Haring)

The Vatican team, "Fratelli Tutti" was formed by Swiss Guards, Vatican employees and their children, as well as priests "who carry out their service in the Secretariat of State, the Roman Curia and the Pontifical Ecclesiastical Academy," the school for priests who will become Vatican diplomats.

The team also included three young migrants welcomed by the Sant'Egidio Community as well as Filippo Montemurri, a Special Olympics athlete with Down syndrome.

The initiative, sponsored by the Pontifical Council for Culture, received support from Pope Francis who met with both teams Nov. 20.

The pope thanked the members of the Vatican soccer club, which he jokingly said were "not the cardinals" but rather "a team where there are no barriers and that makes inclusion a simple normality."

Recalling his meeting with Slovakia's Roma community during his visit to the country in September, the pope said that listening to their "stories of pain, redemption and hope" were a reminder that to be a church means living "as a people called by God, each with his or her own special role to play, all as members of the same team." 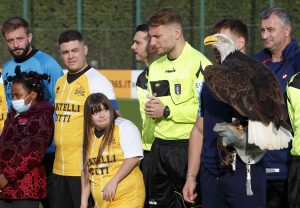 A player from the Vatican team, "Fratelli Tutti," reacts to the Lazio eagle during a ceremony before a friendly soccer match against a team from the World Roma Organization at the Lazio Training Center in Formello near Rome Nov. 21, 2021. The match was played to promote inclusion, including those in Gypsy communities. Ciro Immobile, a forward for the Lazio professional soccer club, is pictured next to the eagle. (CNS photo/Paul Haring)

"Too many times, I told the Roma people of Košice, the Roma have 'been the object of prejudice and harsh judgments, discriminatory stereotypes, defamatory words and gestures. As a result, we are all poorer, poorer in humanity,'" the pope recalled.

The soccer match, he added, was more than just a sporting event; it was a testament of "great significance" that shows that "the way to peaceful coexistence is integration," especially for future generations.

"Children, all children, have the right to grow up together, without obstacles and without discrimination," Pope Francis said. "Sport is a place of encounter and equality, and it can build communities through bridges of friendship."