ROME — From the beginning of his papacy, Pope Francis has distinguished himself for his concessional approach to diplomacy, preferring the path of dialogue, encounter, and at times, silence, as a strategy for engagement with less-than-friendly regimes.

From China and Hong Kong, to Russia, to Nicaragua, the pope, to the consternation of some and acclaim of others, has refrained from making outright condemnations of government acts or political leaders, attempting instead to find logic on all sides.

Critics have questioned the efficiency of this strategy, accusing the pope of failing and even “selling out” Christians in these places, with former United States Secretary of State Mike Pompeo at one point saying the Holy See risked losing its “moral authority” over its failure to condemn alleged human rights abuses in China.

Supporters, however, have urged patience, insisting that while the pope may be silent, Vatican diplomats are working hard behind the scenes to advance on the path of dialogue, the fruits of which won’t necessarily be visible in the here and now.

The events of late November offered two examples for why the pope’s strategy of silence can be helpful, and when it can fail to achieve the desired outcome.

The first scenario involves the Vatican’s surprise condemnation of China for violating the terms of a controversial agreement on episcopal appointments brokered in 2018.

In a Nov. 26 statement, the Vatican voiced “surprise and regret” at the installation of Bishop John Peng Weizhao as auxiliary bishop of the Diocese of Jiangxi, an ecclesiastical territory approved by Chinese authorities but not recognized by Rome.

Bishop Peng Weizhao had already been clandestinely appointed bishop of the papally recognized Diocese of Yujiang by Pope Francis in 2014 — four years before the Vatican struck its provisional agreement with China — and was jailed shortly after. He was released six months later, but, according to local reports, closely monitored by civil authorities afterward.

In its statement, the Vatican said Bishop Peng Weizhao’s civil recognition and his installation in Jiangxi “did not take place in accordance with the spirit of dialogue existing between the Vatican side and the Chinese side and with what was stipulated in the Provisional Agreement on the Appointment of Bishops.”

“The Holy See hopes that similar episodes will not be repeated, and awaits appropriate communications on the matter from the authorities and reaffirms its full willingness to continue respectful dialogue concerning all issues of common interest,” they said.

Such a strong tone was surprising for many Vatican watchers, as it marked the first time the Holy See had issued a direct criticism of the Chinese since striking their historic agreement in 2018. 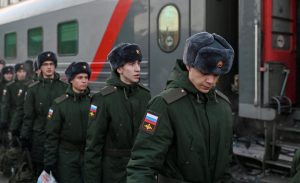 Russian recruits called up for military service amid their invasion of Ukraine walk along a platform before boarding a train in Omsk, Russia, Nov. 27. (CNS photo/Alexey Malgavko, Reuters)

In the four years since, Pope Francis has gone out of his way to refrain from commenting publicly on Chinese affairs, including mass protests in Hong Kong that preceded the imposition of a controversial national security law, and the recent conviction of Chinese Cardinal Joseph Zen, one of the pope’s most vocal critics on China, by a Hong Kong court for his support of the pro-democracy movement.

On his return flight from Kazakhstan in September, Pope Francis dodged a question about whether Zen’s trial constituted a violation of religious freedom, but instead said the Holy See had chosen the “path of dialogue,” which is part of a long-term strategy.

For years, critics have said the pope’s silence on China was being used by Chinese authorities to further oppress the country’s Christian population. Whether that is the case or not is for history to determine. Yet if there’s one thing November’s illicit installation has shown, it’s that the pope’s chosen diplomatic strategy of silence and dialogue doesn’t always pay off.

That same week, Pope Francis got himself into a bit of hot water with Russia when he spoke out about the “cruelty” of the war in Ukraine.

Speaking to the Jesuit-sponsored America Magazine, the pope defended his decision to remain silent on Russia, failing to blame Russia for the conflict and to call out Russian President Vladimir Putin by name, but said he has received lots of information “about the cruelty of the troops.”

“As a rule, the most cruel, perhaps, are those who are from Russia, but do not adhere to the Russian tradition, such as Chechens, Buryats and so on,” he said, referring to two ethnic minorities who frequently provide front-line troops in Russian conflicts.

Chechens, mostly Muslim, are from the southwest of Russia, while the Buryats are a Mongol ethnic group indigenous to eastern Siberia and are who traditionally hold Buddhist or shamanic beliefs.

That prompted Foreign Ministry spokeswoman Maria Zakharova to criticize the comment as “no longer Russophobia,” but “a perversion of the truth on a level I can’t even name.”

Zakharova accused the pope via Twitter of attempting to divide Russian forces, saying, “We are one family with Buryats, Chechens, and other representatives of our multinational and multiconfessional country.”

The head of the Buddhist tradition most followed by Buryats, Damba Ayusheev, also joined in, calling the pope’s comment “unexpected and unkind.”

Perhaps it would have been better, some have argued, for the pope to have maintained his silence: Refraining from commenting on a major geopolitical conflict can avoid unnecessary complications.

Any way you slice it, there are good arguments to be made for or against Pope Francis’ chosen strategy of dialogue, and whether this strategy pays off is probably best described as a gamble. The latest developments involving two major world powers are two strong examples of the intricacies involved in that debate.