Pope Francis has sent 100,000 euros (around $114,000) in aid to migrants at the border between Poland and Belarus, the Vatican said on Tuesday.

The Dicastery for Promoting Integral Human Development announced on Jan. 18 that the pope had also given the same sum to victims of a devastating storm in the Philippines.

The Vatican department said in a press release that the pope had earmarked the funds for migrants living in freezing winter conditions along the roughly 250-mile border separating Poland and Belarus.

It said that the money would also help Caritas Poland, the country’s biggest charitable organization, “to address the migratory emergency on the border between the two countries.”

The border crisis flared up last summer when thousands of people, largely from Middle Eastern countries, sought to enter the European Union by crossing the Belarus-Poland border.

The Polish government and the EU accused Belarus of helping the migrants to gather at the frontier and enter Poland, an EU member state since 2004. The Belarusian government, led by President Alexander Lukashenko, denied the claim.

Polish officials argued that Belarus, a landlocked Eastern European country, fomented the crisis in response to sanctions imposed by the EU after Lukashenko declared victory in a disputed presidential election in August 2020.

Poland responded to the crisis by declaring a state of emergency in the area, fortifying the border, and repelling groups seeking to force their way across with tear gas and water cannons.

The Belarusian government appeared to take steps to de-escalate the crisis in November. Almost 4,000 Iraqi citizens have been repatriated from Belarus, Iraq’s foreign minister said on Jan. 16.

Médecins Sans Frontières announced earlier this month that it had withdrawn its teams after Polish authorities repeatedly denied them access to migrants living in a forested border area in sub-zero temperatures.

“We are concerned that the current policy of restricting access to aid organizations and volunteer groups could result in yet more migrants and refugees dying,” it said on Jan. 6.

“These policies are yet again another example of the EU deliberately creating unsafe conditions for people to seek asylum at its borders.” 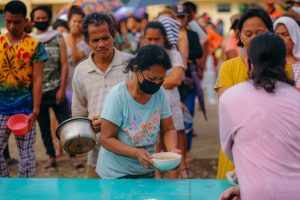 A woman receives a meal during a feeding program at an evacuation center in Surigao City, Philippines, Dec. 21, 2021, following Super Typhoon Rai. The Vatican announced Jan. 18 that Pope Francis authorized an initial contribution of 100,000 euros to the Philippines in response to the devastation from the typhoon. (CNS photo/Jilson Tiu/Greenpeace, handout via Reuters)

The tropical cyclone, known locally as Typhoon Odette, killed more than 400 people and has affected more than 7 million others, according to the U.S. Agency for International Development.

The Vatican dicastery said that the funds would be sent to the worst-affected dioceses with help from the apostolic nunciature in the Philippines.

“It is intended to be an immediate expression of the Holy Father’s feeling of spiritual closeness and paternal encouragement towards the people and territories affected,” the dicastery said, recalling that the pope prayed for victims at his Sunday Angelus on Dec. 19.

“This contribution, which accompanies the prayer in support of the beloved Filipino population, is part of the aid that is being activated throughout the Catholic Church and that involves, in addition to various episcopal conferences, numerous charitable organizations,” it said.