Pope Francis assured those affected by last weekend’s mass shooting in Monterey Park of his “spiritual closeness” and his blessing in a telegram sent to Los Angeles Archbishop José H. Gomez Jan. 25.

The message was sent by Vatican Secretary of State Cardinal Pietro Parolin in the wake of the Jan. 21 late-night gun rampage in which 11 people were killed and at least another 10 injured. The suspect in the shooting, 72-year-old Huu Can Tran, was found dead in a Torrance parking lot the next day after apparently taking his own life.

“His Holiness Pope Francis was saddened to be informed of the shooting that took place in Monterey Park,” read the message delivered to Archbishop Gomez and published on the Vatican’s website.

“Assuring those affected by this tragedy of his spiritual closeness,” it continued, “His Holiness joins the entire community in commending the souls of those who died to Almighty God’s loving mercy and he implores the divine gifts of healing and consolation upon the injured and bereaved.”

The message concluded: “As a pledge of strength and peace in the Lord, the Holy Father sends his blessing.” 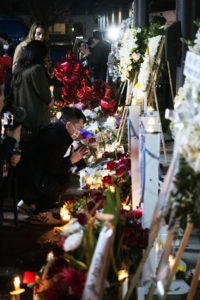 Mourners leaves candles at a memorial near the site of the Monterey Park mass shooting Tuesday, Jan. 24. (Victor Alemán)

Archbishop Gomez said in a statement Wednesday that he was “grateful and touched by this beautiful expression of our Holy Father’s pastoral concern.”

Monterey Park, where the shooting took place, is a heavily Asian-American city east of Los Angeles where thousands of people had gathered over the weekend for a two-day Lunar New Year festival. Chinese Catholics gathered at St. Bridget’s Chinese Catholic Church in LA’s Chinatown the next day told Angelus the shooting came as a shock.

“Monterey Park is a very safe city,” St. Bridget’s parishioner Engeline Wong said. “I never imagined something like this would happen there.”