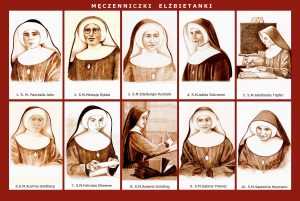 “Although they were aware of the risks they were running, these ... women religious remained alongside the elderly and sick people they were looking after,” the pope said June 12, following his weekly Angelus reflection.

“May their example of faith to Christ help us all, especially Christians who are persecuted in various parts of the world, to bear witness to the Gospel courageously. A round of applause for the new Blesseds!” the pope urged the crowd gathered in St. Peter’s Square.

The sisters took care of the elderly, the sick, and children. Faithful to their vow of chastity and their vocation, they were murdered by soldiers of the Red Army in 1945.

The beatification of the 10 sisters took place June 11 in the cathedral in Wroclaw. Cardinal Marcello Semeraro, Prefect of the Congregation for the Causes of Saints, presided over the ceremony.

“The whole life of these sisters was a true gift of self in service to the sick, the little ones, the poor, the most needy. Their selfless love was heroic to the extent that they chose not to flee from the approaching Red Army in late 1944-45. And this despite the news of its brutality and the atrocities committed by its soldiers against the inhabitants of East Prussia,” the cardinal said during his homily.

Semeraro stressed that the martyrdom of the 10 Elizabethan sisters brings to mind the violence, cruelty, and hatred that now afflict Ukraine. In his homily, he noted that gestures of selfless love and concern for others build peace and are a response to the violence that occurs in the face of war.

“We ask the Lord through their intercession that the world may never again lack respect for womanhood, equality in the dignity of man and woman, and protection of motherhood,” Semeraro said. “Today we commend to them in a special way the Ukrainian people, migrants, and our quest for peace.”

The Prefect of the Congregation for the Causes of Saints recalled Pope Francis’ words in which the Holy Father thanked Poles for being the first to support Ukraine by “opening their borders, their hearts, and the doors of their homes to Ukrainians fleeing war.”

Sister Maria Paschalis Jahn was born on April 7, 1916, in Nysa. After taking her religious vows, she stayed in Kluczbork, Glubczyce, Nysa, and then in the Czech Republic.

On May 11, 1945, Sister Paschalis was brutally attacked and shot by a Soviet soldier while she defended her chastity and faith. Like nine other sisters, although they lived in different places and took up different jobs, she remained faithful to her vocation to the end, giving her life in defense of those in her care.

The Congregation of the Sisters of St. Elizabeth was founded in Nysa in 1810. The main goal of the congregation is selfless service to those in need, especially the suffering and the sick.

Today the congregation is active in 19 countries in Europe, Asia, Africa, and South America. It has some 1,000 sisters working in hospitals, kindergartens, schools, and parishes. The sisters run community centers, nursing homes, orphanages, educational institutions, and boarding schools.

The Elizabethan congregation recognizes the beatification of the 10 sisters as a symbol of remembrance of the tragic death of all nuns who died at the hands of the Red Army in 1945. In its congregation alone, more than 100 sisters died in similar circumstances, the congregation estimates.

In the Church, the liturgical commemoration of Sister Paschalis Jahn and her companions will be celebrated annually on May 11.