Pope Francis: ‘May Our Lady of Guadalupe and St. Juan Diego teach us how to always walk together’

Pope Francis prayed on Sunday that Our Lady of Guadalupe and St. Juan Diego would teach Catholics how to “walk together from the peripheries toward the center,” proclaiming the Gospel together in communion with their bishops.

Speaking in Spanish after reciting the Angelus on Dec. 12, the pope greeted the many pilgrims from Latin America gathered in a sunswept St. Peter’s Square, waving a colorful array of national flags, on the feast of Our Lady of Guadalupe.

He noted that they had arrived an hour earlier to pray the rosary in honor of the patroness of the Americas, in an initiative organized by the Pontifical Commission for Latin America.

“I congratulate you who, by doing this, have united yourselves to those who from Alaska to Patagonia are celebrating Our Lady of Guadalupe, Mother of the true God by whom we live, every Dec. 12,” he said.

“May the Virgin of Guadalupe and St. Juan Diego teach us how to always walk together from the peripheries toward the center in communion with the Successors of the Apostles, who are the bishops, so as to bear good news to everyone.”

He went on: “This experience must be repeated over and over again. In this way, God, who is communion, will move us toward conversion and the renewal of the Church and of society, that we need so much in the Americas — the situation in many Latin American countries is very sad — as well as throughout the world.”

“I am happy that through acts of faith, and public witness such as what you are doing today, we begin preparations for the Jubilee of Guadalupe in 2031, and the Jubilee of the Redemption in 2033, we always have to keep looking forward, right? Everyone together: ¡Viva la Virgen de Guadalupe!”

The Virgin Mary appeared to Juan Diego in 1531, leaving her image on his tilma, or cloak, which is housed today in the Basilica of Our Lady of Guadalupe, the world’s most-visited Marian shrine.

The Jubilee of the Redemption will mark the 2,000th anniversary of Christ’s death and resurrection. It will follow similar jubilees held in 1933, on the 1,900th anniversary, and in 1983, the 1,950th anniversary.

The pope reflected in his live-streamed address on the day’s Gospel reading, Luke 3:10-18, in which St. John the Baptist addresses crowds of people who are touched by his preaching and ask him: “What should we do?”

He said: “By suggesting this question, the Gospel reminds us of something important: life has a task for us. Life is not meaningless; it is not left up to chance. No! It is a gift the Lord grants us, saying to us: discover who you are, and work hard to make the dream that is your life come true.”

“Each of us — let’s not forget this — has a mission to accomplish. So, let’s not be afraid to ask the Lord: what should I do? Let us ask him this question repeatedly.”

Pope Francis said that in Advent, Christians should also ask themselves what they can do to help others.

“The Advent season is meant for this: to stop and ask ourselves how to prepare for Christmas. We are so busy with all the preparations, with gifts and things that pass. But let us ask ourselves what we should do for Jesus and for others,” he said.

The pope recalled that John the Baptist gave advice to different groups of people. He asked those with two cloaks to share with those who have none, urged tax collectors to be just, and enjoined soldiers not to extort others.

“He directs a specific word to each person that responds to their actual situation in life. This offers us a precious teaching: faith is incarnated in concrete life,” he said.

The pope challenged pilgrims to commit themselves to a specific action to help others.

“Let’s choose something concrete, even if it is small, that is adapted to our situation in life, and let’s continue doing it to prepare us for this Christmas,” he advised.

“For example: I can call a person who is alone, visit that elderly person or that person who is ill, do something to serve a poor person, someone in need. Even still: maybe I need to ask forgiveness, grant forgiveness, clarify a situation, pay a debt.”

“Perhaps I have neglected prayer and after so much time has elapsed, it’s time to ask the Lord for forgiveness. Brothers and sisters, let’s find something concrete and do it! May the Madonna help us, in whose womb God took on flesh.”

After praying the Angelus, Pope Francis expressed concern at the threat of an intensification of the war in Ukraine.

“I want to assure you of my prayers for dear Ukraine, for all its Churches and religious communities, and for all its people so that the tensions it is experiencing might be resolved through a serious international dialogue and not with weapons.” he said.

“A statistic I read recently saddens me greatly: more weapons were produced this year than last year. Weapons are not the right path. May the Lord’s Birth bring peace to Ukraine.”

The pope also conveyed his closeness to the victims of tornadoes that struck at least six U.S. states, killing scores of people.

“I also pray for the victims of the tornado that hit Kentucky and other areas of the United States of America,” he said.

He then congratulated Caritas Internationalis, a worldwide confederation of more than 160 Catholic aid organizations, on its 70th anniversary.

“Throughout the world, Caritas is the Church’s loving hand outstretched to the poor and most vulnerable, in whom Christ is present,” he said.

He urged Catholics to join the group’s “Together We” campaign, which will be launched on Dec. 13. 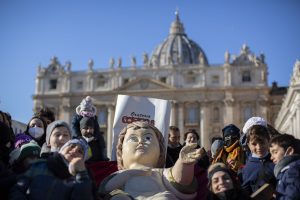 A figurine of the baby Jesus is seen as people gather in St. Peter's Square for the Angelus led by Pope Francis at the Vatican Dec. 12, 2021. Children brought their Nativity figurines of baby Jesus to be blessed by the pope. (CNS photo/Vatican Media)

The pope greeted pilgrims gathered in the square, singling out children holding “Bambinelli,” figurines of the Child Jesus.

On the Third Sunday of Advent, the children of Rome are invited to bring the baby Jesus from their home nativity scenes to St. Peter’s Square to be blessed by the pope, in a tradition instituted by St. John Paul II.

Pilgrims held up their Bambinelli as the pope blessed them at the end of the audience.

Concluding his address, the pope said: ”Let us once again greet Our Lady of Guadalupe: ¡Viva la Virgen de Guadalupe! Please do not forget to pray for me. Enjoy your lunch and arrivederci.”