Pope Francis has given each member of the Roman Curia a book to include in their spiritual reading for their Lenten retreat this year.

The book was written by an unnamed Cistercian monk in the 17th century and is entitled “Abbi a cuore il Signore,” which means “Keep the Lord in your Heart.” It was originally written to aid monks in the Italian monastery of San Bartolo to grow in their spiritual lives. 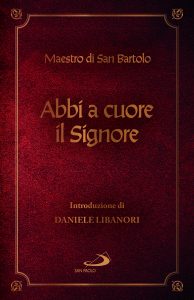 This is the cover of the Italian book, "Abbi a cuore il Signore," a collection of meditations and notes written in the 17th century by an anonymous Cistercian monk. Pope Francis sent copies of the book to members of the Roman Curia to guide them in their Feb. 21-26 Lenten retreat, which will take place individually this year because of COVID-19. (CNS photo/courtesy Gruppo Editoriale San Paolo)

The first edition of the manuscript was published in Italian in November 2020 by Edizioni San Paolo as a 320-page book. It is not currently available in English.

Jesuit Fr. Daniele Libanori edited the text which contains spiritual meditations, including an exposition on the deadly vices. Libarnori wrote in his introduction that the book can be useful in “overcoming oneself and going more quickly toward God.”

In the text, the “Master of San Bartolo” wrote: “The weaker we feel, the more prone we are to hide our frailty. And with habit we end up developing the belief that we are truly as we imagine or as we would like. So if we are weak we try to hide weakness by appearing strong: we are like those animals that, being small, swell their hair to appear larger and more threatening in an attempt, often useless, to intimidate the opponent.“

“In many ways: with force, with art and with cunning we strive not to expose our poor humanity to defeat and shame. But if we humbly accept to present ourselves to him in our condition as poor creatures, the Lord will manifest himself to us as a father who does not judge, but helps with his power…“

“God will meet you where your humanity has descended all the steps of weakness and you will have reached the awareness of your limitation. If you yourself do not choose the path of abasement, life will take you where you would not want because, as the Lord teaches, only those who live their weakness with humility will be exalted.”

Pope Francis has asked members of the Roman Curia this year to make their own arrangements for a private Lenten retreat, also known as the spiritual exercises, on Feb. 21-26, due to the coronavirus pandemic. All papal events will be canceled for that week.

A letter from Pope Francis addressed to Archbishop Edgar Peña Parra, the Substitute for General Affairs of the Secretariat of State, was included with each book.

“This year we will not have the grace of being able to count on a Preacher of Exercises,” the pope wrote.

“I too will join everyone by doing the exercises here. To express this union, I thought of sending this book to each one: ‘Have the Lord at heart.’ I am sure it will help all of us in the spiritual life. United in prayer for one another, fraternally, Franciscus.”

The pope typically spends five days on retreat together with members of the Roman Curia participating in the Lenten spiritual exercises. For the past seven years, the retreat has taken place in a retreat house in the town of Ariccia in the Alban Hills southeast of Rome, although the pope was unable to participate in 2020 due to a cold.

Last year, Pope Francis took part in the Lenten retreat “from home,” following along with the spiritual exercises and reflections from his Vatican residence, the Casa Santa Marta.

The practice of the pope going on retreat with the heads of Vatican dicasteries in Lent began around 90 years ago under Pope Pius XI. The spiritual exercises were held in the Vatican, but beginning in Lent 2014, Pope Francis chose to hold the retreat outside of Rome.

In his Ash Wednesday homily this week, Pope Francis said that the 40 days of Lent are an opportunity to turn from the slavery of sin to the freedom found in reconciliation with God.

“Heartfelt conversion, with the deeds and practices that express it, is possible only if it begins with the primacy of God’s work. What enables us to return to him is not our own ability or merit, but his offer of grace,” he said.

“The beginning of the return to God is the recognition of our need for him and his mercy, the need for his grace. This is the right path, the path of humility.”