VATICAN CITY (CNS) -- Christ was born to touch people's hearts and show that love is the power that changes the course of history, Pope Francis said.

However, the faithful must ask themselves, "Do we want to stand at his side? Do we draw close to him? Do we love his poverty? Or do we prefer to remain comfortably ensconced in our own interests and concerns?" the pope asked in his homily Dec. 24 as part of the nighttime liturgy.

"We are called to be a church that worships a Jesus who is poor and that serves him in the poor," the pope said, calling for a renewed commitment to charitable action and concrete change.

"The church supports and blesses efforts to change the structures of injustice and sets down but one condition: that social, economic and political change truly benefit the poor," the pope said, quoting St. Oscar Romero.

The evening Mass, which is often referred to as "midnight Mass," has not been celebrated at midnight at the Vatican since 2009. Pope Francis celebrated the "Christmas Mass at Night" at 7:30 p.m., as he did in 2020 and 2021.

The Christmas hymn, "Noel," was sung during the procession, and the Mass began with the Christmas proclamation, or "kalenda," of Jesus' birth. The pope, who was seated to the right of the altar, watched as a cloth was lifted, revealing a statue of baby Jesus.

In his homily, the pope reflected on the danger of a Christmas filled only with "decorations and gifts, after so much consumerism that has packaged the mystery we celebrate."

"How do we rediscover the meaning of Christmas?" the pope asked. "We need to look to the manger."

"In the manger of rejection and discomfort, God makes himself present."

"He comes there because there we see the problem of our humanity: the indifference produced by the greedy rush to possess and consume," he said.

It is there that people can discover Jesus' closeness to humanity, his choice to be present in the poor and marginalized, and his demand for "a concrete faith, made up of adoration and charity, not empty words and superficiality," Pope Francis said. 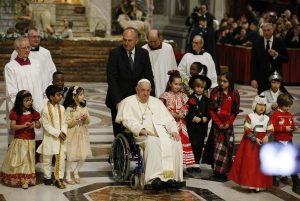 Children walk next to Pope Francis after visiting the Nativity scene at the conclusion of Christmas Eve Mass in St. Peter's Basilica at the Vatican Dec. 24, 2022. (CNS photo/Paul Haring)

The manger, as a feeding trough, can also symbolize a hunger for wealth and power, and people willing to consume "even their neighbors, their brothers and sisters," he said.

"How many wars have we seen," the pope asked, and how many places treat human dignity and freedom with contempt?

"This Christmas, too, as in the case of Jesus, a world ravenous for money, power and pleasure does not make room for the little ones, for so many unborn, poor and forgotten children," especially those "devoured by war, poverty and injustice," he said.

In Jesus, "every child is present. And we ourselves are invited to view life, politics and history through the eyes of children," Pope Francis said.

With Jesus -- born in a manger -- he can become "our food," feeding a hungry humanity "with his tender love," he said. "He comes to touch our hearts and to tell us that love alone is the power that changes the course of history."

On Christmas Eve, God is drawing near, the pope said. "From the manger, as food for your life, he tells you: 'If you feel consumed by events, if you are devoured by a sense of guilt and inadequacy, if you hunger for justice, I, your God, am with you.'"

He said, "God was born in a manger so that you could be reborn in the very place where you thought you had hit rock bottom. There is no evil, there is no sin, from which Jesus does not want to save you. And he can. Christmas means that God is close to us: Let confidence be reborn!"

Jesus was born, lived and died in poverty, and he shows "where the true riches in life are to be found: not in money and power, but in relationships and persons," he said.

"Let charity be reborn," the pope said, and "may we not let this Christmas pass without doing something good" so that a little hope can be "born anew in those who feel hopeless."

"Jesus is not satisfied with appearances" and good intentions, Pope Francis said.

Jesus wants concrete faith and the truth, he said. "He asks us to go to the bare reality of things, and to lay at the foot of the manger all our excuses, our justifications and our hypocrisies. Tenderly wrapped in swaddling clothes by Mary, he wants us to be clothed in love."