Love the Lord by loving the poor, pope says at Mass

Wars, famine and calamities of every kind can tempt Christians to a paralyzing fear that the world is about to end; what they must do instead is act, even in a small way, to make the world a better place, Pope Francis said.

Loved by God, "let us love his most discarded children. The Lord is there," the pope said Nov. 13, celebrating Mass for the World Day of the Poor.

In Italian villages and other places, too, there is a tradition at Christmas to set an extra place at the table "for the Lord who will surely knock on the door in the person of someone who is poor and in need," the pope said.

After Mass and the recitation of the Angelus prayer, the Vatican set a place for 1,300 people to share a festive meal in the Vatican audience hall. Pope Francis joined them for lunch.

And, thanks to a donation from a supermarket chain, the Vatican sent 5,000 boxes of pasta, rice, flour, sugar, salt, coffee, milk and oil to Rome parishes for distribution.

In addition, with the help of volunteer doctors, nurses and technicians, the Vatican set up a free medical clinic in St. Peter's Square for the week, offering physical exams and blood tests to anyone in need. And, with the price of electricity more than doubling in Italy over the past year, the Vatican also was helping poor families with their utility bills, said Archbishop Rino Fisichella, the Vatican organizer of the world day.

In his homily at the Mass, Pope Francis focused on the day's Gospel reading, which recounted people asking Jesus about the end of the world, and Jesus telling them not to be terrified by disasters or deceived by false prophets.

Jesus was telling them to avoid "the temptation of interpreting dramatic events in a superstitious or catastrophic way, as if we are now close to the end of the world and it is useless to commit ourselves to doing good," the pope said.

In the face of trials, he said, the Christian asks him- or herself what the Lord is trying to say through this moment of crisis and "what good, concretely, can I do?"

"Don't run away," the pope said. "Ask the question: What is the Lord saying to me and what can I do that is good?" 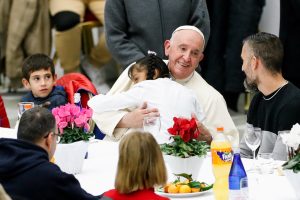 Pope Francis joins some 1,300 guests for lunch in the Vatican audience hall on the World Day of the Poor Nov. 13, 2022. (CNS photo/Remo Casilli, Reuters)

The World Day of the Poor, he said, reminds Catholics that they must "break through that inner deafness which prevents us from hearing the stifled cry of pain of the frailest."

"Let us take to heart the clear and unmistakable summons in the Gospel not to be led astray," he said. "Let us not listen to prophets of doom. Let us not be enchanted by the sirens of populism, which exploit people's real needs by facile and hasty solutions."

"Let us not follow the false 'messiahs' who, in the name of profit, proclaim recipes useful only for increasing the wealth of a few, while condemning the poor to the margins of society," the pope said. "Instead, let us bear witness."

"Let us light candles of hope in the midst of darkness," he said. "Amid dramatic situations, let us seize opportunities to bear witness to the Gospel of joy and to build a more fraternal world."

In the Gospel, Jesus assures believers that even in the midst of trials and persecution "not a hair on your head will be destroyed."

That means each Christian should know "God is my father and is at my side, he knows me and loves me, watches over me and does not sleep," the pope said.

In response Christians must show the same love and care for "our brothers and sisters in need," those who "this throwaway culture wants to discard," including the poor, the old and unborn, he said.

"Let us commit ourselves courageously to justice, the rule of law and peace, and stand at the side of the weakest," Pope Francis said. "Let us not step back to protect ourselves from history but strive to give this moment of history a different face."

"Let us not be content, like the people in the Gospel, to admire the beautiful stones of the temple, while failing to recognize God's true temple, our fellow men and women, especially the poor, in whose face, in whose history, in whose wounds, we encounter Jesus," he said.