Papal preacher on Good Friday 2022: From Pilate to the internet age, people have turned their backs on Jesus

From the time of Pontius Pilate to the internet age, people have turned their backs on Jesus, the papal preacher said at the Vatican’s Good Friday liturgy.

Cardinal Raniero Cantalamessa, O.F.M. Cap., made the observation on April 15 as he preached at the Liturgy of the Lord’s Passion in St. Peter’s Basilica in the presence of Pope Francis.

At the beginning of the live-streamed liturgy, attended by around 3,500 people, the pope entered the basilica and stood before the altar. Unlike in previous years, he was unable to lay prostrate, perhaps due to his persistent knee problems.

After the chanting of the day’s reading from St. John’s Gospel, Cantalamessa devoted his homily to the encounter between Jesus and Pilate, the governor of the Roman province of Judaea.

He said: “What a relevant page from the Gospel for today! Even today, as in the past, man asks himself: ‘What is truth?’ But, as Pilate did, he casually turns his back on the one who said, ‘I came into the world to bear witness to the truth.’ ‘I am the Truth!’ (Jn 14: 6).”

“Through the internet, I have followed countless debates on religion and science and on faith and atheism. One thing struck me: hours and hours of dialogue, without ever mentioning the name of Jesus.”

“And if the believing party sometimes dared to mention his name and his resurrection from the dead, they immediately tried to close the discussion as an irrelevant digression. Everything happens ‘etsi Christus non daretur’: as if in the world there had never been a man called Jesus Christ.”

Veneration of the Holy Cross in St. Peter’s Basilica on Good Friday pic.twitter.com/UJ5CcG3M2k

He went on: “What is the result? The word ‘God’ becomes an empty vessel for everyone to fill at will. But it is precisely for this reason that God took care to give content to his name. ‘The Word became flesh.’ Truth became flesh! Hence the staunch effort to leave Jesus out of the discourse on God; he removes from human pride any pretext for deciding himself what God should be like.”

Cantalamessa, who was made a cardinal in 2020 in recognition of his more than 40 years as Preacher of the Papal Household, cited a letter that J.R.R. Tolkien wrote to his son about people who denied the existence of Jesus.

The author of “The Lord of the Rings” said that “it takes a fantastic will to unbelief to suppose that Jesus never really ‘happened,’ and more to suppose that he did not say the things recorded all of him.” 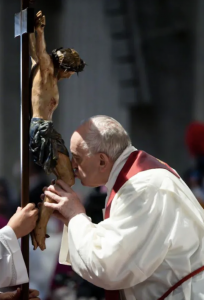 The Italian cardinal noted that today’s thinkers go “beyond Pilate’s skepticism,” arguing that the very question “What is truth?” is presumptuous as nothing is certain.

He said: “Dear brother and sister atheists, agnostics, or those still searching for truth (if there are any listening): the words I am about to address to you are not those of a poor preacher like me; they are from one of your own, one that many of you admire, of whom much is written and of whom, perhaps, many also consider themselves, in some way, disciples and followers: Søren Kierkegaard, the founder of existential philosophy.”

The 87-year-old Capuchin friar quoted the Danish author as saying that “only that man’s life is wasted” who has never intuited that there is a God.

The cardinal said: “Do not ‘waste’ your life! Do not leave this world as Pilate left the Praetorium, with the unanswered question: “What is truth?” It is too important: It is a question of knowing whether we live for something, or in vain.”

After the homily, a deacon and Pope Francis read the 11 Good Friday Solemn Intercessions, which included prayers for the Jewish people, those who do not believe in God, and those suffering from war.

The Adoration of the Cross then took place, followed by the recitation of the Our Father and Holy Communion.

During his homily, Cardinal Cantalamessa alluded to the war in Ukraine.

“One thing of which these events have suddenly reminded us: the structures of the world can change from one day to another,” he said. “Everything passes, everything ages; everything — not only ‘the blissfulness of youth’ — wanes.”

“There is only one way to escape the current of time that drags everything with it: to pass on to that which does not pass! To put our feet on firm ground!”

“Easter, Passover, means passage: let us all aim to experience a real Easter this year, Venerable Fathers, brothers and sisters: let us pass on to the One who does not pass. Let us pass on now with our heart, before passing on one day with our body.”