In Floyd saga, for once Americans aren’t wrong: The Pope is talking about us

ROME – Normally, it’s a mistake to assume everything a pope says and does is directed at a single country. That’s often a special temptation for a given pope’s homeland, and we see it all the time under Francis. During the last Argentine election, every utterance of Francis about anything even vaguely political was spun as a commentary on the race between conservative incumbent Mauricio Macri and left-wing challenger Alberto Fernández, who ended up winning.

Under any pope at all, it’s also tempting for Americans to think whatever he does is about us, since we tend to assume everything must be about us as a matter of principle. Almost always, that’s either exaggerated, silly, or just flat-out wrong, because a pope leads a global institution and can’t afford to get bogged down in the details in any one place.

However, in the case of the killing of George Floyd by a Minneapolis police officer and the wave of unrest it’s sparked across America, it’s no exercise in narcissism to say that right now the pope and his Vatican team are speaking to, and about, us.

We’re seeing an unusual level of commentary and engagement from Rome about an issue in a specific country, suggesting a conviction that something highly important is at stake.

It began on Wednesday, when Pope Francis used his weekly general audience to call Floyd’s death “tragic” and to say he’s praying for Floyd and “all those others who have lost their lives as a result of the sin of racism.”

“Dear brothers and sisters in the United States, I have witnessed with great concern the disturbing social unrest in your nation in these past days,” Francis said.

“We cannot tolerate or turn a blind eye to racism and exclusion in any form and yet claim to defend the sacredness of every human life,” he said, while also denouncing the violence associated with some of the protests.

“The violence of recent nights is self-destructive and self-defeating,” Francis said. “Nothing is gained by violence and so much is lost.”

On Friday, Cardinal Kevin Farrell of the Vatican’s Dicastery for Family, Laity and Life, one of Francis’s closest allies and advisers, led a prayer service organized by the Community of Sant’Egidio, one of the “new movements” in the Church and an outfit especially close to the pope’s heart.

Billed as a prayer for “peaceful coexistence,” the Sant’Egidio event saw Farrell laud Floyd as a “just man.”

Farrell recalled the US Civil Rights movement of the 1960s and 70s, saying that while one might be inclined to think that “after long years of fighting for civil rights and racial equality,” the injustices of the past would not repeat themselves, but that’s obviously not the case. 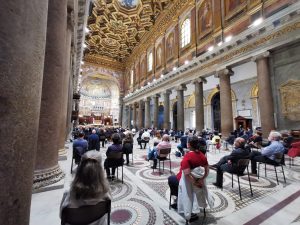 People are seen inside Rome's Basilica of Santa Maria in Trastevere June 5, 2020, during a prayer vigil for peaceful coexistence in the United States. (CNS photo/Junno Arocho Esteves)

Farrell said that even among Christians, “a distorted way of thinking can infiltrate, which leads us to identify with only one side, distancing ourselves from those who belong to the other side: wealthy people against poor people, intellectuals against uncultured people, progressives against conservatives, whites against blacks.”

By making these distinctions, he said, “we completely lose sight of the universal dimension of Christ’s message or even end up identifying our Christian faith with the ideological vision of the side we have embraced.”

Notably, the video conference came just after Gregory had blasted US President Donald Trump for a visit to the St. John Paul II Shrine in Washington, saying he found it “baffling and reprehensible” that the site would allow itself to be used for a political photo op.

Turkson didn’t address that controversy during the video conference, saying only that “brotherhood among humanity needs to be restored” and that “accepting one another is God’s plan for all of us.”

Still, in context his decision to join Gregory can’t help but be seen as a gesture of support, at a moment when the archbishop has drawn criticism in some quarters for his rebuke of the Trump visit. If the assessment in the Vatican were that Gregory had done something wrong, it’s hard to imagine Turkson would have gone out of his way to join the call.

Why is the Vatican so focused on the Floyd saga?

For one thing. It’s the first major test anywhere in the world of whether the coronavirus pandemic has changed anything – whether the common experience of solidarity and loss has altered our perspectives, or whether we’ll simply fall back on the same patterns of division and exclusion.

Pope Francis repeatedly has insisted that we cannot simply return to the status quo ante, and undoubtedly sees the Floyd situation as a test case.

Related to that, Francis and his team also grasp that the economic hardships caused by the coronavirus shutdown have made the social fabric all the more delicate, and may worry that shocks such as the Floyd uprisings could spin out of control.

For another, issues of race and police violence form a perfect illustration of Francis’s broader argument for a “culture of encounter” as opposed to a “throw-away culture.” Much like immigration, where Francis has been willing to wade into explicitly political waters in order to defend the same principles, the Floyd case apparently is seen as a situation in which discretion is no longer the better part of valor.

Whatever the explanation, the Vatican clearly isn’t sitting this one out. In this case, at least, the usual American instinct is right: The pope is talking about us … and, as it turns out, he’s got a fair bit to say.