Complicated and flawed, Levada was a churchman to the core

If there’s one thing 20-plus years of covering the Catholic Church has taught, it’s that people and situations are rarely as simple as they seem. Few churchmen in my experience brought that point home quite as much as Cardinal William J. Levada, who died in Rome Sept. 26 at the age of 83.

During his life, some saw Levada as a stereotypical conservative, a sort of culture warrior in sync with the ethos of the John Paul II and Benedict XVI years.

For many, that reputation was set in cement when Levada was the prime mover behind the decision to launch a Vatican doctrinal investigation of the Leadership Conference of Women Religious, the main umbrella group for the leadership of American nuns, in 2009.

The review produced a stinging eight-page assessment of LCWR in 2012, citing “serious doctrinal problems” and “doctrinal confusion,” including alleged “silence” on abortion and other pro-life concerns, a policy of “corporate dissent” on matters such as women priests and homosexuality, and the inroads of “certain radical feminist themes.”

Yet for all those inclined to reduce Levada to an ideological stereotype, one also has to reckon with how he responded in 1997 as the archbishop of San Francisco when a new ordinance required all contractors with the city to provide spousal benefits to employees in same-sex relationships, a requirement that theoretically put Catholic social service providers at risk.

Levada was unambiguously opposed to same-sex marriage, and predictably opposed the ordinance. Just when it seemed that an impasse was inevitable, however, he offered an alternative: Let employees designate any other person in their household for those benefits, he suggested, such as an elderly parent or a close friend.

Everyone won in the deal: The city got what it wanted, the Church didn’t have to directly countenance same-sex marriage, and, for bonus points, more people got health insurance. I recall speaking to one leading (liberal) Catholic theologian at the time who called Levada’s decision “Solomonic.”

It’s also worth remembering that Levada once blocked a bid by Father Joseph Fessio, SJ, to give his Ignatius Institute at the University of San Francisco pontifical status, which would have insulated it to some degree from university oversight. In that instance, anyway, Levada didn’t quite seem part of a conservative mafia.

To take a different example, critics have faulted Levada’s record on the clerical sexual abuse scandals.

When Levada was the archbishop of Portland in 1992, for example, he removed an accused priest from ministry but then allowed him to return after counseling and under supervision two years later, defending it at the time as proof that rehabilitation is possible.

Levada moved to San Francisco in 1995, and a decade later the Archdiocese of Portland would become the first U.S. diocese to declare bankruptcy due to abuse claims.

Yet for whatever faults one can find, there’s also the fact that Levada also backed the cause of reform in important ways.

In 2005, the newly elected Pope Benedict XVI tapped his old friend to take over his old job as the Vatican’s top doctrinal official.

Pope Benedict XVI accepts a book from U.S. Cardinal William Levada, head of the Congregation for the Doctrine of the Faith, during a meeting in the pontiff's private library at the Vatican in 2010. (Catholic News Service/L'Osservatore Romano)

As prefect of the Congregation for the Doctrine of the Faith, Levada battled Italian Cardinal Angelo Sodano, then the secretary of state, who wanted to abort an investigation of Mexican Father Marcial Maciel Degollado, founder of the Legion of Christ.

Levada, with the backing of Pope Benedict XVI, wanted the probe to go forward, and eventually Maciel was found guilty and sentenced to a life of prayer and penance in 2006.

(Indeed, Levada even stood up for me at one point when Sodano wanted to refuse to cooperate with a story I’d developed when the decision on Maciel had been made but not yet announced.)

Levada wasn’t a cardboard cutout of a man but a real flesh-and-blood figure, complicated and often unpredictable.

He could be irascible one minute, complaining in an interview with me in 2012 that the nuns who flew over to Rome to talk about the LCWR investigation had engaged in a “dialogue of the deaf,” and incredibly jocular the next, often delivering the exact, appropriate word that would deflate a potentially tense situation.

In a town full of people anxious to milk clerical privileges, Levada also delighted in flying under the radar in Rome, often taking strolls around downtown in a Panama hat and Bermuda shorts in order to unwind. He had a healthy respect for clergy and the theology of holy orders, but he was far from a clericalist.

On a personal level, I can say that over 20 years, Levada was unfailingly kind to me, despite the fact, honestly, that he had precious little use for reporters and wasn’t really the easiest person to deal with from a media point of view.

He was also a good friend to those close to him, including the other bishop-members of the “golden class” of 1962 at St. John’s Seminary in Camarillo: Archbishop George Niederauer, Bishop Tod Brown, and Mahony.

“Cardinal Bill was a dear and longtime friend, and I shall miss him greatly,” said Mahony, who described praised Levada for devoting “his entire life to the life and well-being of the Church, nationally and internationally” in a remembrance provided to Angelus News. 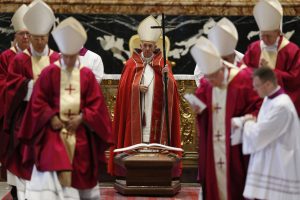 Probably the best way to sum up Levada’s spirit is this: He was a churchman. His aim in life was to serve the Church as best he could by his own lights, given the flaws and blinders that afflict all of us.

As an epitaph goes, that may not be the most eloquent ever devised, but I’m pretty sure His Eminence William Cardinal Levada would take it.