Can the coronavirus help the pope’s push for a more ‘Franciscan’ economy?

The coronavirus (COVID-19) pandemic may have slowed much of the Vatican’s plans and projects, but it is forcing the Holy See to hit the gas on Pope Francis’ push for a more just economy, especially in the post-pandemic world of the future.

Incidentally, there is no plan or project in 2020 better suited to lay out the pope’s vision for this economy than the “Economy of Francis” conference that had been originally scheduled for March 26-28 in the Italian town of Assisi. Pope Francis had planned to attend the event on its final day.

The event was set to gather together some 2,000 young economists and entrepreneurs from 115 countries around the world with the aim of creating a “new and courageous culture” by finding innovative models for business which promote human dignity and protect the environment. Like just about everything else scheduled for this year, it was postponed due to the coronavirus.

On Friday, Sept. 4, the Basilica of Saint Francis in Assisi confirmed that the event is still on, but will take place as a virtual gathering Nov. 19-21. Pope Francis will still close the gathering on the last day of the event. 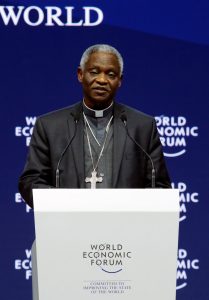 The “Economy of Francis” is under the patronage of the Vatican’s Dicastery for Integral Human Development, the same department tasked with leading the Vatican’s response to the coronavirus crisis. Led by Ghanaian Cardinal Peter Turkson, the department oversees a commission designed to assist local church leaders meet the needs of their people, particularly the poorest, both during and after the pandemic.

According to one member of that commission, the pandemic has shifted the pace at which Pope Francis’ agenda for justice and peace is being pursued, arguing that the crisis has essentially forced the Vatican to press down on the accelerator.

Speaking during a panel on “Pope Francis and the Reform of the Church” organized by Georgetown University and the Jesuit-run La Civiltà Cattolica magazine, Argentine Father Augusto Zampini said COVID-19 “is pushing the world to a different scenario.”

Adjunct secretary of the Dicastery for Promoting Integral Human Development and member of the Vatican’s COVID-19 commission, Father Zampini said that the world’s status will inevitably change, and “we will emerge different, and we have to decide if better or worse.”

“We want to join forces, create synergy in order to create a more sustainable future, that creates the possibilities of actual encounters and that has a preferential option for the poor. A society that creates conditions where we can have a healthy economy that doesn’t present the false dichotomy of having to choose between health and economy,” he said.

According to papal biographer Austen Ivereigh, who spoke on the same panel, the coronavirus and subsequent economic crisis have provided an opportunity for Pope Francis to push forward his vision of a conversion of Church structures and mindsets, focusing less on the institution and more on the people.

“He’s trying to take a culture and bureaucracy that in many ways was built to defend itself from the world, to put it at the service of the world,” he said.

Once his weekly general audiences started up again in August, Pope Francis launched a new series of catechesis applying Catholic social teaching to the pandemic, reiterating the Catholic Church’s “preferential option for the poor” and decrying the inequalities and injustices that have been exacerbated by the crisis.

Among other things, he has demanded equality in vaccinations, arguing that the rich should not get priority over the poor, and he has appealed for political leaders to urgently address social injustices made worse by the coronavirus.

“Some people can work from home, while this is impossible for many others. Certain children … can continue to receive an academic education, while this has been abruptly interrupted for many, many others. Some powerful nations can issue money to deal with the crisis, while this would mean mortgaging the future for others,” he said during one audience speech.

“These symptoms of inequality reveal a social illness; it is a virus that comes from a sick economy,” he said.

So far Pope Francis has not only called for equality in treatment and vaccination access, but he has also advocated for debt forgiveness and a universal basic income.

In a sense, the pandemic has given the pope an opportunity to double down on the agenda outlined in his 2015 eco-encyclical, “Laudato Si” (“Praise Be to You”), in which he urged political leaders to amend the “perverse” structural inequalities of the global economy, and to heed the “cry of creation” and the “cry of the poor.”

During one of the Vatican COVID-19 commission’s updates in May, Turkson said that the pope’s agenda in “Laudato Si” is very much at work amid the coronavirus, but that the pandemic has shifted focus to the different types of poverty in society, and that those most at risk are “ethnic minorities and the poor,” who often lack health insurance and tend to have weakened immune systems due to malnutrition.

It goes without saying that the agenda for the “Economy of Francis” has changed in light of the coronavirus, and each of these themes will emerge as key elements of the discussion. 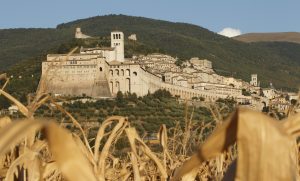 In this 2011 file photo, the Basilica of St. Francis with its bell tower is pictured beyond a field of corn in Assisi, Italy. (CNS photo/Paul Haring)

On Oct. 3, the day before the feast day of St. Francis of Assisi, Pope Francis will visit the saint’s hometown to sign a new encyclical on human fraternity in a post-pandemic world, and which will likely draw on major themes highlighted in “Laudato Si” and include elements that have been part of his general audience speeches.

There is also something to be said for the role that St. Francis of Assisi, for whom the pope took his papal name after his election in 2013, has in all this.

Since the beginning of his papacy, Pope Francis has embraced and celebrated his namesake as a model for justice and brotherhood. Not only was the title of “Laudato Si” taken from one of St. Francis’ hymns to creation, but the pope has consistently returned to St. Francis for high-profile events, including ecumenical prayer meetings.

The fact that his new encyclical could be published on St. Francis’ feast day and that the pope’s major “Economy of Francis” event is slated to take place in Assisi, is proof that the saint’s role in this papacy isn’t over, and that he is being pointed to as a model to the young people who will participate of what kind of economy Pope Francis is looking for.

Speaking to some 5,000 journalists just days after his election to the papacy in 2013, Pope Francis said he first thought of naming himself after the great 13th-century saint when, after it was obvious he had won the necessary two-thirds majority vote, Brazilian Cardinal Claudio Hummes, Archbishop Emeritus of Sao Paulo, hugged him and told him, “Don’t forget the poor.”

“That is how the name came into my heart. … For me, he is the man of poverty, the man of peace, the man who loves and protects creation,” the pope said at the time. Since then, the fight against poverty and inequality, the pursuit of peace by renewing bonds of brotherhood, and care of the environment have all become staples in Pope Francis’ papacy.

It could be said, then, that not only has the coronavirus accelerated the Vatican’s social agenda, but that there is a clearer vision for what a post-pandemic economy should look like — one modeled after the pope’s namesake: the man of justice, the man of peace, and the man who embraces and cares first for the poor.