The one that has made the most waves in the Catholic world since then was the pope’s acceptance of the resignation of Guinean Cardinal Robert Sarah as head of the Vatican’s liturgy department for age reasons.

The 75-year-old cardinal and Pope Francis have often been styled as ideological opponents, due to their seemingly divergent outlooks on matters ranging from immigration to liturgical preferences.

Since Cardinal Sarah’s successor has not yet been named, there is speculation about whether Pope Francis will use the vacancy as an opportunity to shift the department in a more progressive direction, as Cardinal Sarah, 75, is a prominent conservative and enthusiastic proponent of the Traditional Latin Mass.

But while the day’s other announcement made much less of a stir, it promises to have significant implications not only for the Vatican, but the direction of Pope Francis’s papacy: In tandem with the news of Cardinal Sarah’s retirement, the Vatican announced the departure of Italian Cardinal Angelo Comastri, 77, from his position as archpriest of St. Peter’s Basilica and president of the Fabric of St. Peter, a post he had held since 2005.

Known colloquially as the “Fabbrica,” the Fabric of St. Peter’s is the office responsible for the upkeep of the basilica. Maintenance of the Vatican City State itself falls under the care of the Vatican Governorate.

Taking Cardinal Comastri’s place will be neo-Cardinal Mauro Gambetti, a Conventual Franciscan who just got his red hat from Pope Francis in November.

Until now, Cardinal Gambetti, 55, had since 2013 been in charge of running the Sacred Convent of St. Francis of Assisi, where St. Francis is buried. In addition to being the youngest of the newest crop of cardinals to be elevated, Gambetti also has a degree in engineering, theology, and theological anthropology.

Cardinal Gambetti’s appointment is important on several levels. While running the basilica itself is not one of the Vatican’s most high-profile gigs, the Vatican does take its spiritual and cultural patrimony very seriously, and preserving that is a priority, especially given the prized role that the Church believes beauty plays in evangelization.

Yet apart from the patrimonial aspect of overseeing the Vatican’s most iconic landmark, Cardinal Gambetti also represents a step toward changing the inner culture of the Vatican, which is at the heart of Pope Francis’ reform efforts. 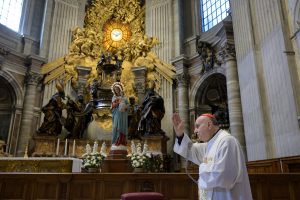 Pope Francis has often said that quite apart from structural reform, no meaningful change is possible unless the Vatican’s internal culture itself changes, and Cardinal Gambetti’s entrance onto the Vatican scene is part of this cultural reform.

On one hand, Cardinal Comastri’s resignation is not a huge surprise given that he is 77, two years beyond the normal age of retirement, so stepping down seems natural.

However, the context of this transition is important. It happened at the same time that a trial is underway in the Vatican’s criminal tribunal for two priests who attended a minor seminary associated with St. Peter’s Basilica, one of whom is accused of sexually abusing a younger boy while a seminarian, and the other with covering it up.

On Feb. 24, several witnesses in the trial took the stand, some of whom accused Cardinal  Comastri of knowing about rumors of misconduct and doing nothing, and of blocking attempts to oust the rector of the St. Pius X pre-seminary, who is accused of covering up the abuse and of hindering the Vatican’s investigation.

Whether Cardinal Comastri is guilty of any negligence in the case is yet to be seen, however, it stands to reason that with a trial underway, Pope Francis was likely aware of allegations against him, and this could have been a factor in why his resignation was accepted now.

If Cardinal Comastri did do the wrongs he is accused of, it would be consistent with the longtime “old school” mentality in the Church that has been the source of so much scandal in the abuse crisis: not outright coverup, but a disregard of accusations of abuse or misconduct and giving the benefit of the doubt to clergy and those in positions of ecclesial power.

A lot has changed since Cardinal Comastri was last promoted 15 years ago in terms of the Church’s approach to the abuse crisis; culturally there is more awareness of the underlying causes, there is a clearer definition of what constitutes abuse, and the Vatican City State itself has new laws cracking down on bishops for both abuse and coverup.

To that end, having someone new that isn’t prey to old habits is important for whatever problems or scandals might come up in the future.

But even more importantly, the Cardinal Gambetti pick says a few things about Pope Francis’ intentions.

Cardinal Gambetti is a Franciscan, someone who for years lived in the place where the pope’s namesake, St. Francis of Assisi, lived and carried out his ministry, a site that normally draws thousands of pilgrims every year.

His presence inside the Vatican now is a visible sign of the tone of the reform Pope Francis wants, one fashioned after St. Francis of Assisi, a man of poverty long celebrated as a courageous agent of change in the Church, causing it to become humbler.

Since the beginning of his papacy, the pope has embraced and celebrated St. Francis as a model for justice, solidarity, brotherhood, and peace.

In an audience with journalists just days after his election in 2013, Pope Francis said he first thought of naming himself after the great 13th-century saint when, after it was obvious that he had won the necessary two-thirds majority vote, Brazilian Cardinal Claudio Hummes hugged him and told him, “Don’t forget the poor.”

“How I would love a Church that is poor and for the poor,” Pope Francis said in the audience.

It’s a message Pope Francis has tried to drive home ever since, in exhortations, encyclicals, and in some of the major speeches of his papacy. But by placing someone already immersed in this vision into a top position within the system, he may have just taken the most important step toward implementing that culture change.