The year 2020 was shaping up to be an exciting one for the Tepeyac Leadership Initiative, which educates and equips Catholics “in the early to mid-stages of their career” to live their faith more authentically in their professional lives.

Following success in the Diocese of Phoenix, the initiative was set to launch in Los Angeles, with 25 participants enrolled. A roster of respected presenters in both cities had been lined up to give courses during the five month, 18-week course, including experts in philanthropy, politics, and different aspects of Catholic social teaching.

The program’s founder and CEO, Cristofer Pereyra, was already making plans to build on a well-received LA debut and bring the program to other U.S. cities.

Pereyra founded Tepeyac in 2018 while serving as director of Hispanic mission for the Phoenix’ Diocese.

But the program’s sunny start in February gave way to the overwhelming arrival of a pandemic that changed the world’s plans in a matter of weeks. By mid-March, the courses’ in-person classes in both cities were canceled and moved online.

“When COVID-19 hit, I told my wife, I felt as if I had this chess board in front of me, ready to make the perfect checkmate, and somebody came in and just threw all the pieces,” Pereyra said.

Yet by the end of the semester, Pereyra wasn’t feeling so gloomy anymore. In fact, he has come to consider the forced virtual transition a blessing in disguise.

“What we saw when we had to do at least half the program online was that the end result in the experience of the participants was the same,” Pereyra said. “I’d say we were able to replicate 99 percent of the in-person experience online.” 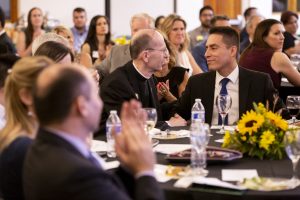 Thanks to that experience, Tepeyac has announced it’s “going national” earlier than Pereyra ever expected. Next year, the program will be offered virtually to participants in any part of the U.S. from February to June 2021. Depending on what local COVID-19-related health guidelines look like then, the Phoenix and Los Angeles tracks could be in-person, online, or a “hybrid” combination of both.

Luke Kircher, a graduate of this year’s Phoenix cohort, says he was impressed by the smooth mid-semester transition to virtual, and has found among his Tepeyac classmates a sense of community with other young Catholic professionals that he hadn’t experienced before in Church circles.

“I’ve always been involved, but this got me to step a little bit more out of my comfort zone,” said Kircher, a married father of four who works in the restaurant food service hospitality. “But the community was what was the most exciting and interesting for me.”

Besides the bonds formed with other like-minded Catholic professionals in his area, Kircher says the course challenged him to better understand the Church’s teachings on issues ranging from education to bioethics, and to become more of a “spiritual leader” in his family and local community.

But Pereyra says Tepeyac is more than just another networking opportunity for professional Catholics.

“There are wonderful Catholic professional associations or guilds where there’s a common interest and there are social components,” he said, citing organizations such as the Catholic Association of Latino Leaders, Legatus, Young Catholic Professionals, and the St. Thomas More Society.

Tepeyac, by contrast, is a formation program. “It’s a very intense experience, and by the grace of God in those five months we have been able to touch participants in very profound ways,” Pereyra said.

Los Angeles participant Denise Barajas said the course showed her “practical steps of what it means to become a leader in my community and my work environment.”

“It’s about understanding how to move forward in your career and in your professional life, but also taking your faith with you and not having to leave it at the door,” said Barajas, a digital business manager from Alhambra. 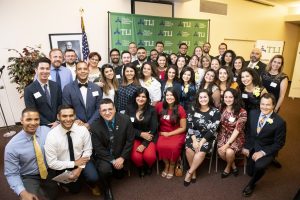 Barajas acknowledged that the sudden transition to online in March was “a little bit difficult” at first amid so much uncertainty during the onset of the pandemic. Pretty soon, however, “it was like being in person,” she said, crediting the emphasis on personalized attention from the presenters.

“We started doing more work in small groups, then one-on-one time after the [online] sessions were over,” she said. “Those were definitely more helpful, and helped me to connect in a better way with my classmates and presenters.”

Experiences like Barajas’ are why Tepeyac’s national program hopes it can mimic the 2020 course’s improvised online success next year, using only live presentations and Q&As (no powerpoints or pre-recorded videos) and allowing for one-on-one opportunities between presenters and participants.

Registration for the course, which will run simultaneously to the Phoenix and Los Angeles courses, kicks off Oct. 1 with a virtual open house (with a “business” dress code, nonetheless) and will run until Nov. 15.

The program takes its name from the hill in present-day Mexico City where the Virgin Mary is believed to have appeared to an indigenous peasant named St. Juan Diego in 1531. Pereyra is confident the intercession of Our Lady of Guadalupe is behind the program’s growth until now. The day that the state of Arizona approved the program’s articles of incorporation, for example, fell on Dec. 12, the feast of Our Lady of Guadalupe.

“We really feel that she has been with us from the beginning,” said Pereyra, who said there’s been recent interest in the program from young Catholics around the country and even abroad. “There’s been so many little miracles happening along the way and even in spite of COVID-19, we’re thriving.”