The Redemption of Christopher Columbus

I have hardly seen many family members due to COVID-19, so I was pleased when my sister and her family recently came to join me for dinner at my parish.

I asked my niece Maeve how school was going, and she offered a review of her classes. Maeve is not someone you have to draw out for conversation, but she made my jaw drop while talking about her history class. She was learning a lot, she told me with the insouciance of a teacher’s pet. That included — and she admitted that it was news to her — that Christopher Columbus was a bad man.

“Well, because of slavery and all that.”

As a Fourth Degree Knight of Columbus, I felt it incumbent on me to disagree. I told her that Columbus was a valiant man who had proceeded against all odds in his voyage and mission. I said while he was a man of his time, he was also a man of deep faith. Her response was not to pursue the line of argument. She didn’t say it, but I saw “Whatever!” in the thought cloud above her head.

I was left frustrated, realizing that some of the most incomplete and erroneous ideas have become common cultural assumptions. If a student in a Catholic school can condemn Columbus as a “bad man,” then some influential cultural warriors have gained a victory.

Columbus is now thought and taught to be a “bad man” because his voyage of discovery led to a dramatic expansion of European civilization on the world. Columbus has become a symbol of all that is wrong with Western Civilization, and it has become the consensus that everything would be better if Europeans had not arrived in the New World.

This idea is even embraced by some ecclesiastics, who propose that the evangelization that took place was not justified since the means by which it was conducted were not always upright. 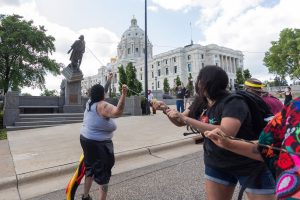 Protesters topple a statue of Christopher Columbus in front of the Minnesota State Capitol in St. Paul, Minnesota, on June 10. (Shutterstock)

I remember standing on a Mayan pyramid in Tikal with some Spaniards who sighed with guilt because their ancestors had “destroyed” the civilization whose ruins lay before us. Tikal was destroyed before the conquistadors arrived, of course, but that did not matter to the romantic hankerings of these modern, post-Franco Spaniards (who enjoy all the perks and luxuries of the culture they profess to hate).

“You don’t think that the Spanish were not at least better than the people who built this place for human sacrifice?” I asked. “Didn’t you hear the guide said they rolled the victims’ heads down these steep steps?” They rolled their eyes at my reply.

How do such ideas gain currency and why are they being passed down to the next generation?

Several books about Columbus have been very instructive in teaching me how people choose to think of him. One is the 1996 science-fiction novel “Pastwatch: The Redemption of Christopher Columbus,” by Orson Scott Card.

The author imagines an alternative history in which Columbus is stranded in America with people from the future. The planet has been catastrophically depopulated and ecologically damaged.

Columbus is given credit in the novel for his sincere Christianity. But an African woman named Diko comes from the future to marry him and change the course of human history, supposedly to save the human race from extinction. In my opinion, Diko’s purpose is to power-wash Columbus with political correctness.

Alternative-history fiction involves reimagining the past to reshape it. “Pastwatch” is an attempt in fiction to do what cultural commentators are trying to achieve by history writing: change our understanding of the past by adapting it to the prejudices of the present. Ambiguity, thy name is alternative history.

Card may have written a historical novel that veered off into fantasy, but he did teach me something important. I knew that Christopher Columbus wanted to find a trade route to the Orient of Cathay and Cipango, as he called China and Japan.

I assumed that he was motivated by what a German book about him captured in a title, “Um Gott und Gold,” or “God and Gold.” I learned that the gold the discoverer wanted was supposed to pay for the liberation of Constantinople and the reconquest of Jerusalem.

I also read a book about Columbus’ laborious study of the Fathers and the Bible to defend his route to the East by way of the West, as well as his prediction of the end of the world if his plan was achieved. It is called “Christopher Columbus’s Book of Prophecies,” and shows how much Columbus worked out of a medieval theological mindset.

In other words, Columbus was a brilliant sailor, a kind of entrepreneur of discovery, and a Christian mystic. He was concerned about conquest but as a means of evangelization. This seems on the face of it to be a contradiction, but he lived in the shadow of the Islam’s conquest of almost half of the world the Europeans knew and its ambition to conquer the other half.

He saw himself marching toward the apocalypse, premised on the preaching of Christ to all the nations as predicted by Scripture.

Much of the rejection of Columbus has to do with the imposition of European values and the exploitation of indigenous peoples that happened long after the explorer died. Still others argue that it would have been better for the Incas and the Aztecs to keep their violent empires and gold (until the French or the Portuguese or the English got to them) than to discover Jesus. That is a philosophical position that really is a decision about faith.

The intellectuals who reject Columbus must rely on a hypothetical, alternative history in which Columbus did not discover America. But the real choice is between seeing the value of the past, with its light and shadows, or deciding to completely erase it.

Pulling down the statues of Columbus doesn’t help people see reality in its complicated ambiguity — it makes people ignore the past, and thus fail to learn from it. Calling Columbus a “bad man” because of ideas that are antithetical or politically incorrect to some now, doesn’t make you more aware of history, but less so.

History should give us a more complicated and nuanced view of human affairs, not a narrower one.