The coronavirus (COVID-19) pandemic has taken a heavy human toll in the United States and in California: 125,000 and 6,000 deaths and counting, respectively. Meanwhile, millions of Americans have lost their jobs, and the recovery of certain sectors of the economy is uncertain.

But while those figures can be calculated in numbers and figures, the pandemic’s toll on the mental health of Americans is a quieter, but similarly devastating, phenomenon.

According to data from the U.S. Census Bureau, one-third of American adults showed signs of clinical anxiety or depression since late April, compared to just 11% with similar mental health symptoms in the first three months of 2019. Survey data also found that the young and the less educated, women, and some ethnic minority groups reported the most strain on their overall mental health.

She described the results as “staggering.” Responders during the pandemic were eight times as likely to report serious mental illness (28%) than those queried two years before (3.4%).

“Clearly, the pandemic has had a devastating effect on mental health,” Twenge recently wrote. “Yet some people are suffering more than others. Younger adults ages 18 to 44 — mostly iGen and millennials — have borne the brunt of the mental health effects. They’ve experienced a tenfold increase in serious mental distress compared with 2018. Meanwhile, adults 60 and older had the smallest increases in serious mental health issues.”

Catholic therapist Mark Mitchell, who teaches at Loyola Marymount University and California State Dominguez Hills, told Angelus that a main factor in the reports of mental distress was the lengthy social isolation people have been ordered to endure, especially in places like New York City and Los Angeles.

Human beings have basic needs like food, shelter, and clothing, but also that of human touch. With social distancing measures limiting that to little or nothing, even the best technology (like Zoom), where people can see and hear one another, doesn’t satisfy our communal cravings as social mammals.

“People are depressed, you know, and depression is feeling hopeless and powerless,” Mitchell explained. 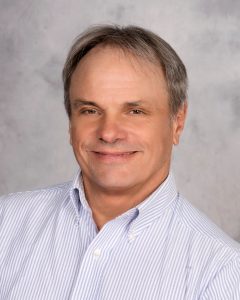 Among the “encroaching feelings” that have become common during this crisis is anxiety about when will things get back to normal, or if they ever will.

“Humans are human beings, but we’re ‘human doings,’ ” said Mitchell. “We’ve got to be doing something. And this has thrown off ‘my doing.’ I think males, particularly, identify with work. Just having to go to work to pay the bills. And now, 20 million more people are suddenly out of work.”

Another new survey, this one done by the Harris Poll for the American Psychological Association (APA), looked at the mental health effects on parents during recent months. At a time when school-age children have been forced to stay home because of the pandemic, the findings came as little surprise.

Nearly half of the 3,013 moms and dads questioned reported battling severe daily stress, according to the “Stress in America” poll. Seven out of 10 admitted having problems doing their own work and juggling their children’s at-home schoolwork.

Seventy percent said another family problem was just meeting necessities and putting food on the table, compared to 44% of nonparents. Getting health care was stressing 66% of parents. And 63% said they felt bad about missing graduations and weddings.

People of color were more likely to report higher stress related to the coronavirus. Four in 10 Hispanics said they often or constantly felt stressed out, compared with 32% for blacks and 32% for whites. The figure was just a little less for Native Americans (31%) and Asians (28%).

The APA warned that negative mental health aftershocks of the coronavirus will be serious and long-lasting, surely taking even more of a personal toll on weary moms and dads.

“For many parents, it can feel overwhelming to face competing demands at home and work, along with possible financial challenges during this unprecedented crisis,” said Arthur C. Evans Jr., APA’s CEO.

“Children are keen observers, and often notice and react to stress or anxiety in their parents, caregivers, peers, and community. Parents should prioritize their self-care and try their best to model healthy ways of coping with stress and anxiety.”

Mitchell has witnessed the findings firsthand: During the pandemic, he reported seeing his graduate students at Cal State Dominguez Hills through Zoom “freaking out more.” Most lost their part-time jobs and wondered how they would get through the ongoing crisis financially, while half told him they missed going to class, sitting at their desks listening to him lecture in person. 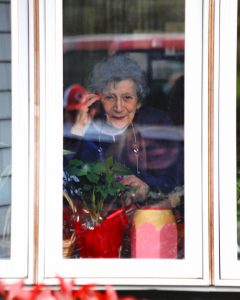 Grace Schab, 87, smiles while talking on the phone with her family April 18, 2020. The Catholic resident of an assisted living facility in Harwood, Md., and other residents have been quarantined during the COVID-19 pandemic. (CNS photo/Aris Harding)

One impression based on Mitchell’s time in therapy sessions is that families with teenagers are seeing their children “acting out” more than usual.

“They’re getting squirrelly, I’ve heard from my patients,” Mitchell reported. “They’re not doing their schoolwork. Some are smoking weed. And their parents are forced to deal with them all the time.

“So,” Mitchell added with a laugh, “what you have is the family tension of being cooped up with a teenager, which nobody wants.”

The stay-at-home orders, coupled with social distancing guidelines for public activity, present a double-edged sword from a health perspective.

On one hand, they are considered crucial to limiting new infections, especially as sectors of the economy gradually reopen this summer. But months of stay-at-home orders, warmer weather, and outrage over the May 26 killing of George Floyd while in police custody, have conspired to create frustrating scenarios for public health officials.

“We’re very concerned that our public health message isn’t resonating,” testified Centers for Disease Control and Prevention (CDC) Robert Redfield before Congress June 4. “We continue to try to figure out how to penetrate the message with different groups.”

But an opinion piece in an April issue of JAMA (Journal of the American Medical Association) Psychiatry pointed out a serious potential unintended consequence of this distancing: the risk of rising suicides.

“Secondary consequences of social distancing may increase the risk of suicide,” the authors wrote. “It is important to consider changes in a variety of economic, psychosocial, and health-associated risk factors.”

Theories of suicide today stress the importance that social connections play in prevention. Often, people thinking of killing themselves pull away from relatives and friends. This, in turn, just increases feelings of loneliness.

“Therefore, from a suicide prevention perspective, it is concerning that the most critical public health strategy for the COVID-19 crisis is social distancing,” the authors stressed. “Furthermore, family and friends remain isolated from individuals who are hospitalized, even when their deaths are imminent. To the extent that these strategies increase social isolation and loneliness, they may increase suicide risk.”

Researchers at Well Being Trust and the Robert Graham Center for Policy Studies in Family Medicine and Primary Care have even gone further on this issue. They’ve estimated that whatever the final U.S. death toll is from the coronavirus, another 75,000 people could die from alcohol or drug abuse and suicide. 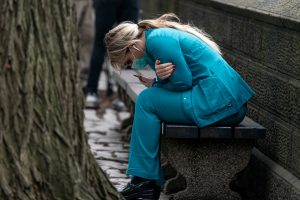 A health care worker in New York City sits on a bench near Central Park March 30, 2020, hunched over and embracing herself. (CNS photo/Jeenah Moon, Reuters)

Three main factors are at play in these “deaths of despair.” First, the economic collapse with Great Depression-like unemployment. Then the uncertainty caused by the appearance of a novel, unknown microbe. And, finally, the mandated months of social isolation and continuing isolation for possibly years.

On top of those concerns, Mitchell also fears that the resurgence of cases caused by the opening of businesses, entertainment venues, and public gatherings too soon will only increase mental health problems among the general public.

From his perspective as both a believer and an experienced therapist, Mitchell believes hope can be restored to the hopeless during and after the pandemic, and that communities of faith have a crucial role to play.

The Catholic therapist said he didn’t entertain this last query. And after a moment of reflection, he said, “We know when people are of service, spiritually, they are more fulfilled. They feel better about themselves. They have more of what’s called ‘Post-Traumatic Growth’ from PTSD (post-traumatic stress disorder), which is happening to people because of the pandemic. They do better.

“So it’s a challenge, I think. ‘What does this mean?’ What does life mean?’ And that’s where I think people turn to faith to get some kind of soothing, reassurance connection of how they should act and what they should do. I know I do.”

Providence Resource call center: Offers resources for undocumented immigrants and families, older adults and seniors, the homeless, and those in need of mental health help.

DMH Help Line: The Department of Mental Health has expanded its hotline to provide emotional support for LA County residents and employees during the COVID-19 pandemic. The hotline provides access to the LA County Emotional Support Volunteer Line and the LA County Employee Wellbeing Line.

NAMI resources: The National Alliance on Mental Illness provides a help line and online resources for adults, children, and those in need of crisis support.

List compiled with the help of the Office of Life, Justice, and Peace of the Archdiocese of Los Angeles.