Catholic scholar and legal expert Ryan T. Anderson warned that if the Equality Act is passed by the Senate and signed into law, it would significantly impact women's privacy and safety, genuine equality, medical practices and religious liberty.

He made the remarks in the keynote address for the recent annual virtual fundraiser for the Diocese of Phoenix's John Paul II Resource Center for Theology of the Body and Culture. 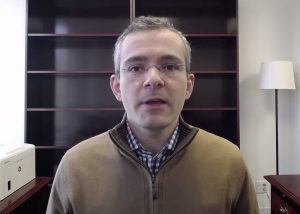 Ryan T. Anderson, president of the Ethics and Public Policy Center in Washington, speaks during a virtual fundraiser March 6, 2021, for the Diocese of Phoenix's John Paul II Resource Center for Theology of the Body and Culture. (CNS screen grab/YouTube, Catholic Media Ministry)

The center focuses on forming youth, equipping adult leaders and evangelizing the culture through St. John Paul II's teaching on human sexuality and the body.

The Equality Act would amend the Civil Rights Act of 1964 to prohibit discrimination on the basis of sexual orientation and gender identity in employment, housing, public accommodations, public education, federal funding, the credit system and jury duty.

Anderson, who is president of the Washington think tank Ethics and Public Policy Center, said the bill also would force access to women's only locker rooms, restrooms and shelters to anybody who identifies as a woman, regardless of biological difference.

He quickly noted that while people experiencing gender dysphoria aren't predisposed to violence, because anyone can claim to be a woman, "there will be abuses of that law." It also would create disadvantages for female athletes by forcing them to compete against men identifying as women.

"Actual equality requires us to treat men and women equally, but differently," Anderson said. "In order to treat them equally, we created equal athletic opportunities ... so our daughters can compete at the highest levels of athletics against people with bodies like theirs."

The act also would require medical professionals to provide sex-change therapies and procedures that would violate not only their conscience and religious beliefs, Anderson said, but also their best medical judgment.

"People who feel that sense of discomfort and alienation, they're not faking it, and they aren't actively choosing it, but they're not getting the healing that they deserve," he said.

Anderson cited a 2011 Swedish study that found individuals who had undergone sex reassignment surgeries were 19 times more likely to commit or attempt to commit suicide, although the study's authors' proposed solution was to offer more psychological care in addition to hormone therapy and surgery.

He said children are being encouraged to go through gender transition, citing a Children's Hospital Los Angeles study of doctors who perform double mastectomies on 13-year-old girls. Treatments for such transitions include puberty blocking drugs and hormonal therapies and, eventually, surgery.

"It's one thing if an adult says, 'It's my life, I'm free to make mistakes.' It's a whole other thing if adults tell a child that they're actually trapped in the wrong body," he said.

"All of us would agree that if there was an individual who was being denied COVID treatment because they identify as LGBT, that would be unjust discrimination, and it shouldn't be allowed to take place," he said.

"What's happening is that they're using a nonexistent hypothetical to then pass a law that actually says those hospitals have to do sex reassignment procedures," he continued. "They're pulling on the heartstrings of American people, and then they're saying all sorts of reasonable and true beliefs will now be treated as unjust discrimination."

St. John Paul said the crisis of the 20th century was one of a false anthropology, Anderson said.

Anderson said there are two extremes that must be rejected: One is the idea that there are no differences between men and women, and the other relies on "radical stereotypes" that paralyze women.

"John Paul wants to reject both of those extremes and say men and women are equal, but they're different. They're complementary, and that the full image of God is both, that it takes both a man and a woman to fully be the 'imago Dei' (image of God)."

The late pope serves as a model for us to bear witness to the truth, Anderson said.

"We have to have the courage to speak out on this," he said. "If this is going to be done, it's going to come from the church -- both the institutional church and the lay members of the church."

A book Anderson wrote to address these issues, "When Harry Became Sally: Responding to the Transgender Moment," was recently removed from Amazon's website.

Brian Huseman, Amazon's vice president for public policy, wrote in a letter it was removed because he said it "'frames' LGBTQ+ identity as a mental illness."

In a response issued through the book's publisher, Encounter Books, Anderson said there is consensus that those dealing with gender dysphoria experience "great suffering," but there is debate, he said, "about how best to treat patients who experience gender dysphoria. ... No good comes from shutting down a debate about important matters on which reasonable people of goodwill disagree."

In his presentation, Anderson said Amazon's move provided publicity for his book and helped increase sales, but it has negative consequences for authors and book publishers and for those looking for helpful resources.

For fear of being de-platformed by Amazon, Anderson said authors and publishers could begin self-censoring.

"This is going to have a chilling effect on our ability to communicate the truth," he added.

Amazon controls 50% of print book sales and 75% of e-book sales, according to the Association of American Publishers.

In introducing Anderson at the March 6 fundraiser, Bishop Thomas J. Olmsted of Phoenix recalled his own time working with St. John Paul while serving in the Vatican Secretariat of State.

Among his duties was translating the late pope's Wednesday audiences for English-speaking pilgrims, including the series that would come to be known as the theology of the body.

"In the face of communism and unrestricted capitalism, John Paul II proclaimed the dignity of the human person, the importance of the common good and the need for religious freedom," he said.

"In the midst of widespread confusion over marriage, family and sexuality," Bishop Olmsted added, "he proclaimed the inherent goodness and exalted meaning of man and woman, the conjugal union between husband and wife and the gift of children for us."