Roe or no, those affected by abortion need mercy, compassion, and healing

Editor's note: Ahead of the 49th anniversary of the Roe v. Wade Supreme Court decision on Jan. 22, Angelus invited several pro-life advocates to weigh in on what efforts to protect the unborn should look like if the Court overturns Roe later this year. Their essays can be found here and in the Jan. 28 print issue of Angelus.

While the spotlight on abortion continues to focus on the expected U.S. Supreme Court ruling in Dobbs v. Jackson, which many predict will effectively overturn Roe v. Wade, millions of people who have participated in abortion continue to suffer in darkness.

Regardless of whether or not federal abortion laws may soon change, the Church’s constant message that God’s mercy is greater than even the most serious sin, will need to continue to be proclaimed.

As we begin a year in which the focus of the pro-life cause may shift, it’s time to proclaim the truth louder than ever before: that God eagerly desires repentance, healing, and wholeness for those who have chosen or facilitated an abortion.

Commentators might characterize what’s ahead as the beginning of a “post-Roe” world, but from the perspective of those who work with people affected by abortion, we’re 49 years in, and the scope of abortion’s impact is staggering.

The number of women whose children died from abortion is roughly 35 million or more (given that many women have more than one). A roughly equal number of fathers have lost one or more children to abortion.

Twenty-four percent of women who have had abortions identify as Catholic. As a rough estimate, more than 11 million Catholic women have been involved in a legal abortion in the past 49 years.

That means that people impacted by abortion are everywhere — in our parishes, places of work, and at social events. That impact extends to grandparents, family, friends, surviving siblings, and those who assisted in the abortion itself.

Some might argue that if abortion access is limited nationwide, the need for healing ministries will lessen. But given that it often takes decades for people to come forward to seek help, the need for healing will remain. Ministry leaders in the field today share that many in their final years of life seek help and healing, having obtained illegal abortions prior to 1973.

For Catholics, our mission now and in the coming months is the same as was entrusted to us by the bishops in 1975: to proclaim the message of forgiveness, healing, and hope and provide care for those suffering in the aftermath of abortion.

The Church in the United States meets this need through diocesan abortion healing ministry, most often called Project Rachel Ministry, which takes both its name and mission from the Old Testament passage in Jeremiah. Rachel weeps for her children “who are no more.” God wipes the tears from her eyes and offers her the promise of hope for her future (Jeremiah 31:5–17). 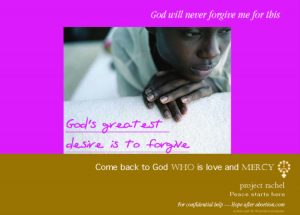 A promotional announcement for the Project Rachel ministry. (Courtesy image)

This confidential ministry provides opportunities for God’s mercy to transform the hearts of those wounded from abortion. It facilitates a personal encounter with Jesus, who is Divine Mercy. And through it, the Church serves as what Pope Francis would call a “field hospital after battle.”

Though most Catholics will not serve directly on a diocesan ministry team, there are a variety of ways to support abortion healing in your local community:

No matter what changes in June, Catholics are called to move forward in confidence that Christ has won the victory over sin and death in the resurrection. God’s grace can help each of us become channels of healing mercy, so all who suffer from abortion find peace in Jesus, the light of life who shines in the darkness.

Mary McClusky is the Assistant Director of Project Rachel Ministry Development at the USCCB Secretariat of Pro-Life Activities.