Each year, thousands of university students and campus ministers come together for SEEK, the flagship conference of the Fellowship of Catholic University Students (FOCUS).

Billed as an opportunity to draw university students — especially seekers, or those just beginning their journey of faith — into a deeper encounter with Christ, the annual event centers around real, in-person interaction.

For the planners of SEEK21, a central event with its customary crowds of thousands this year was out of the question due to the COVID-19 pandemic. But so was resorting to a 100% online event.

The solution: combine the best of virtual and in-person programming.

The result was more than 3,000 small groups, which met in person Feb. 4-7 to participate in SEEK programming while following local health and safety guidelines.

When Christine Sarnow, senior director of events for FOCUS, and her team started planning almost a year ago, they realized the event would have to be “scaled up or scaled down depending on specific group or parish needs, restrictions, and local guidelines” for FOCUS chapters around the country. 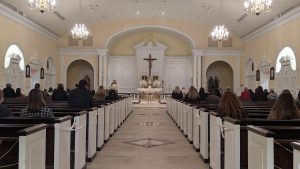 In California, where COVID-19 rates soared over the holidays, it seemed that “seekers” would have to settle for SEEK’s fully online option, which tried to avoid becoming another night of streaming video by connecting online participants to digital small groups and social events.

But in timing that seemed almost providential, California lifted its stay-at-home order on Jan. 25 as COVID-19 figures improved. That allowed about half of the state’s participants to organize hybrid gatherings across several campuses in a matter of days.

Students from Cal State University at Fullerton and UC Irvine met in small groups at Christ Cathedral in Orange, while students from UCLA joined UC Santa Barbara for outdoor groups at its Catholic student center. For these groups, in person meant outdoor screenings of keynote talks, small-group discussions at distance and with facial coverings. Some were able to have social activities like trips to the beach.

“I was ecstatic and grateful that California loosened restrictions and we got out from our stay-at-home order,” said Joshua Schroeder, a fourth-year student at San Diego State University who plans to serve as a FOCUS missionary next year.

“We were able to have a lot of great discussions and a lot of fun in what I believe was still a very safe manner.”

Central to the conference experience was access to the sacraments, including the Feb. 6 evening of adoration, a prayer vigil that Sarnow described as the “summit” of the conference. 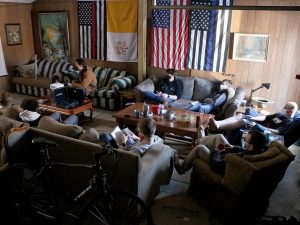 A group gathers for a Fellowship of Catholic University Students event amid the pandemic. (Courtesy FOCUS)

For students from UCLA and UC Santa Barbara, the conference summit converged with some long-awaited good news: the reopening of the campus chapel to the public.

Following the Supreme Court ruling on Feb. 6, which overturned the State of California’s ban on indoor worship, the chaplain at UC Santa Barbara’s St. Mark’s Catholic Center informed participants that adoration could be held indoors, a change in venue welcomed by students who had endured weeks of outdoor liturgies in the mild California winter.

“I really enjoyed having adoration indoors,” said Tristan Miller, a fourth-year student at UC Santa Barbara. “Outside, it’s still Jesus. But inside, with the music too, it was just a lot better.”

Even students on campuses that opted for virtual small groups — like Claire Robertson, a second-year master’s student at USC, where groups met via Zoom — benefited from the Supreme Court ruling, as liturgies and adoration returned indoors at places like USC’s Our Savior Church.

“I am a convert to the Faith, and this church is my home parish, yet I had no idea how much I missed worshiping in the space until I was able to return,” Robertson said. “Our staff and priests made it possible for liturgies to be safe and reverent, and it has been such a restorative experience to receive the sacraments in person with my community.”

Edward Sri, a founding leader of the Fellowship of Catholic University Students, speaks about the power of the cross and what it can teach about forgiveness in a Feb. 5, 2021, keynote during the SEEK21 conference. Over 26,000 participants globally gathered for the virtual conference sponsored by FOCUS Feb. 4-7, 2021. (CNS screenshot/courtesy The Florida Catholic)

Though not all SEEK campuses in California were able to move adoration indoors, due to differing regulations between parishes and dioceses, outdoor access to the Mass and adoration still allowed access to the conference’s central focus — encounter with Jesus Christ.

“Fortunately, San Diego is famous for being a place of temperate climate,” Schroeder said, “While it was a bit brisk and may have been more convenient to be inside, it was still well worth attending in person outdoors to strengthen our bonds with our friends and Our Lord.”

With the success of their hybrid SEEK21 format and the fast-approaching anniversary of the initial lockdown, FOCUS is already looking at how to continue bringing its ministry past the virtual and back to in person.

At the conclusion of the conference, small groups were invited to participate in a new FOCUS Bible study led virtually by Curtis Martin, FOCUS founder and CEO, and Edward Sri, S.T.D. And hybrid models aren’t just constrained to FOCUS ministry — the Archdiocese of Denver is planning its middle-school conference, Mountain Madness, following a similar mix of the digital and in-person programming.

“FOCUS encourages us through SEEK21 to bring prayer and the gospel into our homes and local networks,” said Mark Haas, director of public relations for the Archdiocese of Denver, where FOCUS is headquartered.

“While nothing can replace being able to fully gather together, the SEEK21 format was certainly an innovative and impactful solution for the times.”