"When we speak to our elected officials, we speak as missionary disciples, as followers of Jesus Christ," said Archbishop José H. Gomez of Los Angeles in a Feb. 9 closing message to the Catholic Social Ministry Gathering.

"We speak as citizens of faith," Archbishop Gomez said in his message, delivered online -- as was the entirety of the annual meeting for social ministers in the church. 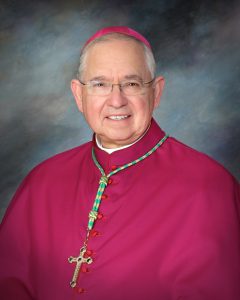 "And as faithful citizens, we are here to call our nation to true justice, to respect the sanctity and dignity of every human life, to never close our hearts or turn our back on people in need," added the prelate, who is president of the U.S. Conference of Catholic Bishops.

Just as the Catholic Social Ministry Gathering was virtual, so too were the Capitol Hill visits. Were participants to head to the Capitol, they would have found tall fencing surrounding the building where Congress does its work.

And were they to try and visit the senators representing their respective states, they would have not found any in their offices, as the second impeachment trial in as many years of now-former President Donald Trump began Feb. 9. Trump is accused of fomenting the Jan. 6 riot and siege of the Capitol, which brought about the installation of those fences.

"Thank you for your witness. It is so important what you are doing," Archbishop Gomez told Catholic Social Ministry Gathering participants. "We are here to seek justice as the prophet tell us. And we are here to seek the truth that Jesus Christ revealed."

This includes "the truth about the human person, his sanctity, dignity and the transcendent destiny of human life," he said. "Without God we have no way to know the true nature of the human person."

He added, "As you know, our government and society has become more and more secularized. And that is a challenge. If we do not know what it means to be a human being, we do not know how to create a society that will be good for human beings. Without reference to God, words like justice, human dignity and equality -- these words have no meaning, no real foundation outside of politics, and that's dangerous."

Archbishop Gomez said, "The Declaration of Independence says our human rights and freedom are found in God -- not government. That's crucial. Because if we think governments are the source of our rights, well, governments can decide which persons have rights and which do not. Then government can decide who will be treated with dignity and who will not. So it is important, friends, that we make our religious commitments clear."

Organized by the USCCB's Department of Justice, Peace and Human Development, the annual event was co-sponsored by 10 USCCB departments and 18 national Catholic organizations.