Catholics and higher ed: Where do we stand and where do we go next?

COVID-19 has been a major stressor for educational institutions as well as for students and their families. Many big questions face higher education, including value for money, financial sustainability, shifting demographics, and a falling birthrate.

Our U.S. Catholic colleges face an additional set of questions.

Most of my adult life has been spent in higher ed institutions, both secular and Catholic, in Europe, Africa, Asia, and the U.S. Working in academic leadership has made me aware of the potential tension between being a Catholic university and a Catholic university. Catholic universities have to live up to the same academic standards as their secular competitors. But as part of the teaching ministry of the Church, they should also reflect the Catholic view of the human person and society.

Most of our colleges and universities were founded in a very different world from the one we inhabit. Many grew out of our astounding parochial school system. Over the course of more than 100 years, Catholic colleges helped raise Catholics’ social and economic standing, successfully bringing many of them into the mainstream of national life.

But that very success created new challenges, as universities sought to raise academic standards and compete in the market for the best students and professors. In 1967, the group of Catholic university leaders who signed the Land O’Lakes agreement argued that Catholic universities are independent of “authority of whatever kind, lay or clerical, external to the academic community itself.”

Over the next decades, many schools run by religious orders handed over direct ownership to boards of lay trustees. Those decisions were taken by people raised in a strong and distinctive American Catholic culture. They were confident about the strength of that culture. But since then, the U.S. Catholic world has evolved, becoming weaker and fragmented, and the Catholic identity of schools and colleges has shifted in tandem with the decline in religious vocations of the orders who founded them. 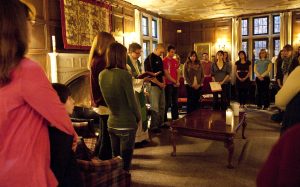 A priest celebrates Mass for students and faculty on Jan. 31, 2012, in the Catholic Student Center at Washington University in St. Louis. (CNS/Lisa Johnston, St. Louis Review)

The role of our universities in forming thinking and responsible people of faith has come under question, often by faculty who may well not have much understanding of the mission of a Catholic university. Few US Catholic universities have complied with the requirements of Pope John Paul II’s 1990 “Ex Corde Ecclesiae” (“From the heart of the Church”), that more than 50% of professors should be Catholics.

Professors — including those who teach at Catholic universities — are now largely on the political and cultural left. As such they are less likely to support Catholic teaching on sexuality, gender, and the sanctity of life, or to have a religious outlook.

Education costs are high. Small Catholic colleges struggle to remain above water financially. A four-year degree at a reputable Catholic college can run to well over $250,000, pricing out middle-class families who are ineligible for much financial aid.

When Catholic parents and students, and college trustees and leaders come to think about college, they face difficult choices as they try to balance finance, faith, and education. Parents may prioritize entry into the job market over Catholic faith. For others, a Catholic college education is only a dream without substantial financial help. There are no easy or perfect answers.

Broadly, there are three different possibilities for Catholic students and higher education. A minority of institutions clearly put the word Catholic in upper case letters. Their students will be taught by committed Catholic professors, the often-rigorous curriculum will take both faith and rational thinking seriously. But students will not necessarily encounter much religious diversity. And for the most part, these are small colleges that do not have widespread appeal.

A second range of colleges are Catholic in their origins, but more likely to stress that they are universities first and Catholic second. They are committed to academic excellence as well as service and justice, and aim to produce ethical citizens. But, faith — other than ethics — can easily get downplayed in favor of religious diversity and social justice.

Such universities may well have active campus ministries and Catholic students can find a faith community. And the core curricula of the best of these schools will include at least some religious classes that all students have to take. But sustaining students’ faith cannot realistically be assured.

Another possibility is the non-Catholic college, public or private. Newman Centers at larger residential universities offer Catholic students ways to have a more lively faith experience. Campus ministries at community colleges can sadly rarely give that level of support. What none of these can offer however is what old-time Catholic colleges provided excellently: a formative experience where faith is valued and integrated into thinking in all aspects of college life.

A fail-safe all-inclusive checklist for “Characteristics of all Catholic Universities” is impossible, but here’s a working short list that I hope might be useful to parents, students, professors and administrators, trustees and donors: courageous leadership that fully “gets” the substance and style of Catholic education. A campus culture that is both clearly Catholic and inclusive of the many people there who do not share our faith. Being clearly at the service of the local and global Church, which includes the poor. And, of course, institutional integrity.

But even that list doesn’t get to the real DNA of Catholic education. For that we have to dig deeper into the things that Catholic thinking does supremely well: bringing together faith with our God-given intelligence. Seeing God’s thumbprints all over the world. Understanding that life is complex. Hopeful realism and humility about what we can and cannot know. Always being willing to at least listen to new perspectives. Understanding that the past has much to teach us, as do different cultures. And experiencing that study can be one way of worshiping God.

Many of the most famous U.S. universities began with religious convictions, but eventually gave up their religious identities. Catholic higher education is a precious inheritance. I hope we can pass it on in its fullness to generations to come.