Bishops to continue discussion of Catholics and Eucharist in fall meeting

When the U.S. bishops meet this fall for their annual assembly, they will revisit the discussion they began in mid-June about the Eucharist and will be presented with a drafted document on the "meaning of the Eucharist in the life of the church."

But in the time since their virtual spring assembly, the topic of the Eucharist, and particularly the debate it raised about denying Communion to Catholic politicians who support abortion, has prompted ongoing discussion.

It even came up on the pope's flight back from Bratislava, Slovakia, Sept. 15.

Pope Francis said he preferred not to comment directly on the issue of denying Communion in the United States, but he urged bishops to take a pastoral approach rather than wade into the political sphere.

And it's a complicated issue, pointed out Timothy O'Malley, director of education at the McGrath Institute for Church Life at the University of Notre Dame and author of the recent book "Real Presence: What Does It Mean and Why Does It Matter?"

During a Zoom discussion on this topic sponsored by Georgetown University this past summer, Bishop Kevin C. Rhoades of Fort Wayne-South Bend, Indiana, acknowledged the work ahead would be challenging, but as chairman of the bishops' Committee on Doctrine, he was prepared to address it. 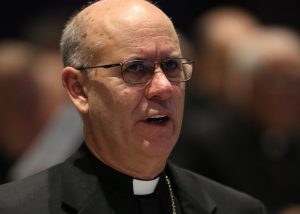 That committee is charged with drafting the document on the Eucharist that will be presented to the bishops in November.

"The goal of the document is to contribute to the eucharistic revival," he said.

Even before the bishops' discussed and voted on proceeding with document, Cardinal Luis Ladaria, prefect of the Vatican's Congregation for the Doctrine of the Faith, urged the bishops in a letter to proceed with caution in developing a national policy "to address the situation of Catholics in public office who support legislation allowing abortion, euthanasia or other moral evils."

During their spring meeting, 75% of U.S. bishops approved the drafting of a document, addressed to all Catholic faithful, on eucharistic coherence.

And during long discussions on the document before the vote, several bishops specifically pointed to President Joe Biden and House Speaker Nancy Pelosi, D-Calif., who are Catholic, for not actively seeking to end legal abortion, and they said such politicians should be denied Communion.

The basis for that stems from what the bishops described as eucharistic coherence, meaning that those who receive Communion, and particularly those in public office, need to be in communion with what the church teaches and not facilitating or promoting what the church views as grave moral issues.

With a lot of emphasis being put on what looks to be a litmus test about Catholics' worthiness to receive Communion, Susan Timoney, an associate professor of pastoral studies and a dean at The Catholic University of America, said Catholics should talk to their pastors about this.

She said they will likely come away with a sense that the bishops' efforts to encourage a deepening appreciation for the Eucharist is an attempt to say, "Look, it means something to be a disciple."

Timoney also said this is a conversation she thinks bishops and priests would love to have to be "a vehicle for God's mercy and God's love" and also to point out that the church can and should address modern culture about the dignity of the human person and what it means to respect this "from conception through death."

Notre Dame's O'Malley, who also is academic director of its Center for Liturgy, said he doesn't think the document itself will have much to do with Biden and Communion. 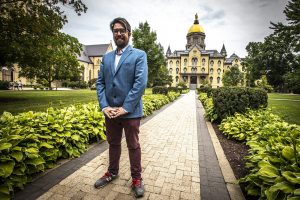 Timothy P. O'Malley, director of education at the McGrath Institute for Church Life at the University of Notre Dame and academic director of the Notre Dame Center for Liturgy, is seen on the South Bend, Ind., campus Aug. 6, 2021. (CNS photo/Chaz Muth)

"If you pay attention to what the bishops are saying to recent revisions and outlines," you don't see it "being sort of political," he told Catholic News Service in the summer.

As he sees it, the document will be a response to the COVID-19 pandemic -- when Catholics were prevented from going to Mass in person -- as well as a decrease in Catholics attending Mass overall.

"When we gather for Mass to celebrate the Eucharist, we're not just celebrating one religious ritual that can be replaced by another," he said.

O'Malley also said the upcoming document and discussion around it should involve looking at the role Catholics have in the public square.

As far as denying Communion to Catholic political leaders who publicly support abortion, he said there are complications in it but he doesn't buy those who say: "We have to give every politician Communion no matter what, because we can't deny them grace."

"Grace is given in all sorts of ways," he said, adding that for Catholics it is not given exclusively in the sacraments.

"The Eucharist isn't magic. It's not suddenly going to make someone who's a totalitarian dictator into a eucharistic person," he said.

When Catholics receive the Eucharist, he added, it means they "belong to the body," which means they "uphold all dimensions of solidarity."