Many YouTube videos produced by Catholic or pro-life organizations will now bear an abortion disclaimer and links to an abortion webpage, as YouTube claims that abortion is a topic prone to misinformation.

The move means many YouTube videos about Pope Francis, Catholic teaching on abortion, and alternatives to abortion now include links to abortion information that video creators or video subjects might reject.

“It biases viewers against their messaging, to prejudge and dismiss their arguments before they’ve even heard them,” Morell told CNA.

“Adding these disclaimers is clear political bias on the part of YouTube against pro-life groups and messaging,” she said. “Rather than allowing for free speech and debate in today’s modern public square, YouTube is preferring one side and position over the other by adding these disclaimers. And attempting to prejudice viewers against the pro-life position.” 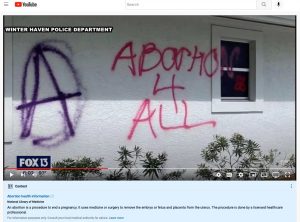 YouTube tagged a news report about pro-abortion vandalism at a pro-life pregnancy clinic with a box directing viewers to government-sponsored information about abortion. (YouTube screenshot via CNA)

“An abortion is a procedure to end a pregnancy. It uses medicine or surgery to remove the embryo or fetus and placenta from the uterus,” the context box shows beneath affected videos. “The procedure is done by a licensed healthcare professional.”

Various pro-life and Catholic news and commentary videos are affected, including commentary from clergy.

YouTube videos about Pope Francis now include the abortion information panel. The panel appears on video news reports about his remarks that compare abortion to hiring a hitman.

At least one YouTube video by the U.S. Conference of Catholic Bishops’ Secretariat of Pro-Life Activities displays the abortion information panel. The video, posted last year, is a parish webinar against taxpayer-funded abortion. 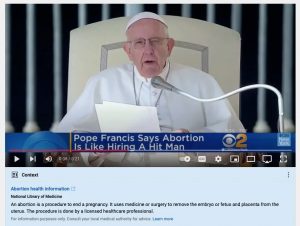 A news report about Pope Francis comparing procuring an abortion to "hiring a hit man" is tagged by a YouTube information box referring viewers to government-sponsored content about abortion. (YouTube screenshot via CNA)

A video from Bishop Robert Barron of Rochester, Minnesota, titled “Pro-abortion Politicians: Can We Actually Dialogue?” now displays the panel, as do videos from abortion critic LiveAction.

A June 24 ABC News video about Catholic alternatives to abortion has the tag, as do news videos about President Joe Biden, House Speaker Nancy Pelosi, and the conflict between their professed Catholicism and their strong support for legal abortion.

Some news videos on pro-abortion vandalism of Catholic churches and pro-life pregnancy centers now present the panel with abortion information.

CNA sought comment from YouTube but did not receive a response prior to publication. YouTube announced the information panel on July 21, saying that it will remove “content that provides instructions for unsafe abortion methods or promotes false claims about abortion safety.”

A YouTube help page said that these information panels will be shown “regardless of what opinions or perspectives are expressed in a video.” It says the information panel may appear for those who “search or watch videos related to topics prone to misinformation.” The page describes the panels as background information from “independent, third-party partners, to give more context on a topic.”

Morell, however, objected that federal law does not envision internet platforms acting in this capacity.

“In this instance, YouTube is very much acting as an editor or publisher,” she said.

Companies have “broad-sweeping immunity from publisher liability even for these traditional publisher functions,” she said. This means pro-life groups cannot sue them for adding the disclaimers.

“Pro-life groups are left without legal recourse for contesting this editorial interference by YouTube. If YouTube wants to add information to content, then it shouldn’t get to have legal immunity for those edits,” Morrell said.

Backers of abortion have at times accused pro-life advocates of promoting misinformation and have called for political and corporate leaders to take action against them.

In June the New York attorney general’s office sent Google a letter requesting that the company remove pro-life pregnancy centers from search results for “abortion services.” The letter was critical of efforts to dissuade pregnant women from seeking abortions and said it was “dangerous and misleading” to list both abortion providers and non-abortion providers in search results.

In 2014, Google began removing some paid ads for pro-life pregnancy centers after the abortion advocacy group NARAL Pro-Choice America complained that the ads were deceptive, a charge that pregnancy centers rejected.

Google has blocked all ads promoting abortion pill reversal, a progesterone regimen for women who take the drug Mifepristone.

Progesterone, a pregnancy-related hormone, is approved to prevent miscarriage. The American Association of Pro-Life Obstetricians and Gynecologists defended the practice in a Nov. 16, 2019, medical practice bulletin.

“The current research suggests that using progesterone to counter the effects of mifepristone and stop the abortion process is both safe and effective,” the bulletin says. “Since there is no alternative treatment for women who change their minds, it is reasonable to offer this life-saving and life-changing treatment to women who desire to increase the chances of pregnancy survival.”

The pro-abortion American College of Obstetricians and Gynecologists, claims that the use of progesterone to reverse the drug mifepristone is not supported by science and its use does not meet clinical standards.