The very first game of the NCAA Division I men's basketball tournament featured a seminarian just two months away from being ordained as a priest of the Diocese of Peoria.

No, Deacon Austin Bosse won't be shooting three-point shots or dunking. But he is a vital and senior member of the Mount St. Mary's Mountaineers, winners of the Northeast Conference tournament and a No. 16 seed in the tournament's East Regional. The Mountaineers drew Texas Southern, also a No. 16 seed, in a March 18 "First Four" play-in game. 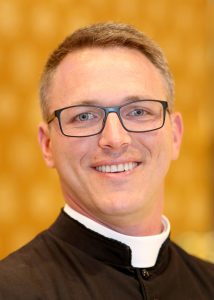 It's a role Deacon Bosse has filled since fall 2016, when he was just a second year pre-theology student. The following spring, the team also qualified for the national tournament, known as March Madness.

"I always remind the coaches that while I'm not saying there's a causation, there's definitely a correlation with me being with the team and us going to the tournament," Deacon Bosse chuckled during a March 16 interview with The Catholic Post, Peoria's diocesan newspaper.

He had just returned to the team hotel from Indiana University in Bloomington, site of the Mountaineers' opening game March 18.

Because of COVID-19, this year's tournament is being played entirely in the Indianapolis area to reduce travel for the 68 teams involved.

"I am in the 'bubble' of Indianapolis," said Deacon Bosse, noting the strict restrictions in place for athletes, coaches and even chaplains.

Mount St. Mary's is a Catholic institution in Emmitsburg, Maryland, with more than 2,000 students. The campus includes Mount St. Mary's Seminary, among the largest in the United States and where Deacon Bosse and 13 other Peoria diocesan seminarians are preparing for the priesthood.

The university has 26 sports teams and, in a unique relationship with the seminary, all have seminarian chaplains.

"We talk about the formation of the whole person," said Deacon Bosse of the chaplains' role. Coaches help the student-athletes improve in their sport, strength coaches help their bodies get stronger, and tutors assist their academic pursuits.

Chaplains, meanwhile, are present "to help them spiritually, because that's an aspect of their life and if it's not in order, they're not going to be as good as they can be -- as a human being or a player," said Deacon Bosse, noting the team chaplains also minister to the coaches and athletic training staffs.

He described the 12-10 Mountaineers as "a gritty team" with tall, talented athletes. "Even if they're down, they will fight to the very end," said Deacon Bosse.

That perseverance helped Mount St. Mary's through a season with its share of adversity, including the departure of three players and two lockdowns because of COVID-19.

"These guys have experienced isolation, and working through this type of adversity has made them stronger," said Deacon Bosse. "None of our players are so good to be able to win a game by themselves, but man, when they play together as a team they are really hard to beat."

Deacon Bosse was raised in Kansas and played high school basketball as a senior. His mother Rosie described his style of play as "a bull in the china closet."

"I was basically playing football on the hardwood," recalls Deacon Bosse. "I was a bruiser and it wasn't pretty."

But he has always enjoyed college basketball. "I love the raw talent still being developed at the college level," he said. 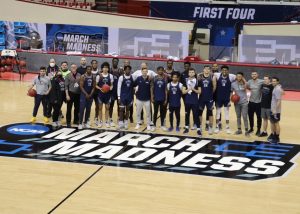 Deacon Bosse, who entered the seminary after graduating with a degree in bakery science from Kansas State University and working for a time for Frito-Lay, knows the college years also are key in spiritual formation. He described the team chaplain's role as a "ministry of presence," and it's a lesson he will take to his priestly assignments.

"It's a great opportunity for us to be with college students as they try to navigate the faith and all these new ideas coming at them and new freedoms," said Deacon Bosse.

"Sometimes people just need a priest to be present for them," he continued. "One thing I've learned from this group is that when you make yourself available, they are open and willing to have you be a part of their life. They begin to trust you."

As a priest, he will hope to be a familiar face in the community he serves, adding he is "excited and terrified" about the awesome duties of the priesthood awaiting him, including celebrating Mass and hearing confessions.

One of the ways he is present to the Mountaineers is by leading a team prayer after each game "to give thanks, win or lose, that we get to play this great game."

Mount St. Mary's is one of eight Catholic colleges in the NCAA men's tourney. The top seed overall is undefeated Gonzaga, the No. 1 seed in the West bracket.

Sister Jean Dolores Schmidt, the 101-year-old Sister of Charity of the Blessed Virgin Mary who is Loyola Chicago's team chaplain and was a hit when the Ramblers made their Final Four run in 2018, got permission to attend the tournament -- once she was fully vaccinated. But she won't be seated too close to the team bench this year.

In his final semester at Mount St. Mary's Seminary, Deacon Bosse is not only taking a full course load of classes, he is preaching every weekend at a nearby parish and occasionally presides at baptisms.

When Mount St. Mary's qualified for the NCAA tournament, he had to tell his pastor he would be out of town for the weekend.

"He was OK, considering where I was headed," he said.