Papal economics and the fall of soccer's Super League

LEICESTER, England — It was the strangest two days in world sports. Late on Sunday, April 18, 12 of the biggest soccer teams in Europe announced they were forming a “Super League” and would compete against one another — and a few select other elite teams — every year.

By Tuesday, the whole thing had collapsed.

Although such a format would be familiar to most Americans — it is how all professional leagues work in the United States — it would have turned European soccer upside down.

Soccer is based on promotion and relegation. Each nation has a league pyramid, and the worst performing teams drop a level after each season, replaced by the best performing teams from the lower-placed league. It would be like if, depending on their performance, the Columbus Clippers and Sacramento River Cats had the chance of replacing the Texas Rangers and Pittsburgh Pirates in baseball’s American and National Leagues.

What that means — at least in theory, let’s say — is that a team playing in the equivalent of a Class AA baseball league could win the World Series in three years.

In the current format, the best performing soccer teams in each European league then play one another the next year in the Champions League, considered the most competitive annual soccer tournament in the world.

What these dozen teams decided to do was leave this system behind — they wouldn’t have to qualify to enter the European tournament anymore, because they couldn’t be relegated from the Super League.

The teams were England’s Manchester United, Arsenal, Liverpool, Tottenham Hotspur, Manchester City, and Chelsea; Spain’s Real Madrid, Barcelona, and Atlético Madrid; and Italy’s Juventus, Inter Milan, and AC Milan. Their argument was that their names were what drew television viewers, so their brands were what mattered, not their sporting merits. 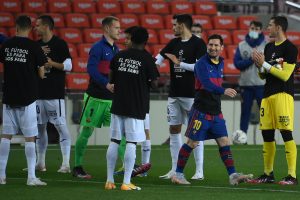 Players from Spanish team Getafe wearing t-shirts reading "Soccer is for the fans" to protest against the Super League greet Barcelona star Lionel Messi after a match April 22. (Lluis Gene/AFP via Getty)

The soccer fans of Europe revolted, and in the face of nearly universal condemnation, the Super League collapsed after less than 48 hours.

One wonders what noted soccer devotee Pope Francis thought about it, since the events seemed to perfectly intertwine two of his favorite talking points: The current economic system is enriching the few at the expense of the many, and the power of the people — he uses the term “popularism” — to shape their societies.

He outlined this vision in his recently released interview book “Let Us Dream: The Path to a Better Future.”

If you want an example of broken economics, just look at the idea of the Super League. The top soccer teams in Europe make exponentially more money than those further down the food chain. However, they also lose more money than they make. A lot more.

In the aftermath of the league’s implosion, several fingers have pointed at the American billionaires (among them the LA Rams’ Stan Kroenke) that owned several of the breakaway teams, many bought in leveraged buyouts that ruined the balance sheets. The new league itself was to be financed by debt, with a firm belief that its appeal would lead to huge TV contracts.

Given the fact that several television deals have broken down in the last few years because media companies just haven’t been able to recoup their costs, the infrastructure of the new league may have been built on toothpicks.

And so, while it is easy to imagine the pontiff shaking his head at hearing the news of the perceived money grab by these giant clubs at the expense of poorer clubs, his heart was probably gladdened at the response of the fans.

No one wanted the new league, not even the fans of the clubs involved. (Cynically, these fans — those who live in the cities in which the teams play, and actually attend matches — are referred to as “legacy fans,” as opposed to the real target audience in the living rooms of Shanghai, Kuala Lumpur, and Los Angeles.)

These fans live on local rivalries — London alone has six teams in the Premier League, although one of them, Fulham, looks to be relegated at the end of the season. These fans also love to dream: London has six other professional teams in the lower leagues, all of which dream of one day playing in the top tier, and maybe even possibly winning England’s coveted Premier League championship.

I live in Leicester, home to Leicester City, which proved the dream is possible. In 2008, the team was playing in the third tier of the English pyramid. In 2016, to the world’s astonishment, it won the Premier League.

It currently sits third in the Premier League, and on Sunday — the day the Super League was announced — it won its FA Cup semifinal game.

Teams like Leicester — which are knocking on the door of being a “big club” — would find that door bolted shut by the Super League.

However, because of a 48-hour upswell of “popularism,” we in Leicester are allowed to continue to dream.

Pope Francis has to be smiling.