A new private independent program set up to compensate victim-survivors of child sexual abuse by priests was rolled out Sept. 16 in six participating Catholic dioceses in California, including the Archdiocese of Los Angeles.

At a news conference in Los Angeles, three lay Catholics with extensive experience in government leadership, praised the new program’s commitment to victims’ healing and its independence from Church control.

Davis, along with former CIA director and Secretary of Defense Leon Panetta and former Small Business Administration head Maria Contreras-Sweet, will oversee the program’s handling of abuse claims submitted between now and March 2020, when the window for submitting claims closes.

For more than 30 years, they have represented victims of tragedies including the 9/11 attacks, the Deepwater Horizon oil spill, and the Sandy Hook massacre. Feinberg and Biros answered reporters’ questions via telephone during the news conference.

In this new program, the Archdiocese of Los Angeles and the Dioceses of Fresno, Orange, Sacramento, San Bernardino, and San Diego agree to allow Feinberg and Biros independently assess claims of abuse. They also agree to pay whatever Feinberg and Biros determine is appropriate for claims that they deem to be credible and substantiated.

“Our work and this ICP [Independent Compensation Program] are entirely independent of the clergy and the Church,” explained Feinberg in a video statement played at the press conference.

“By formal agreement, the Church has no authority whatsoever to challenge our determinations of eligibility, to challenge amounts of compensation that we offer individual, eligible victims.”

Together, the six dioceses represent more than 10 million Catholics — more than 80 percent of the state’s Catholic population.

According to its proponents, the new program promises victims several advantages to filing abuse suits in court.

Anyone with a claim of sexual abuse by members of clergy in those dioceses, even victims without legal status in the U.S., can file abuse claims anonymously.

The program also offers victims a cheaper, quicker alternative to drawn-out litigation in courts, as well as counseling sessions with licensed professionals of the victims’ choosing in addition to the compensation payments.

Claimants who accept the compensation offered by the program are required to agree not to take legal action over the abuse claim. Feinberg and Biros stressed that there is no confidentiality requirement for victims-survivors, who are free to report or discuss their claim in public or to law enforcement after compensation.

Payments will be made from a joint fund paid into by the dioceses, who have also agreed not to limit the dollar amount of payouts and to hand over any relevant documents to the program’s investigators. 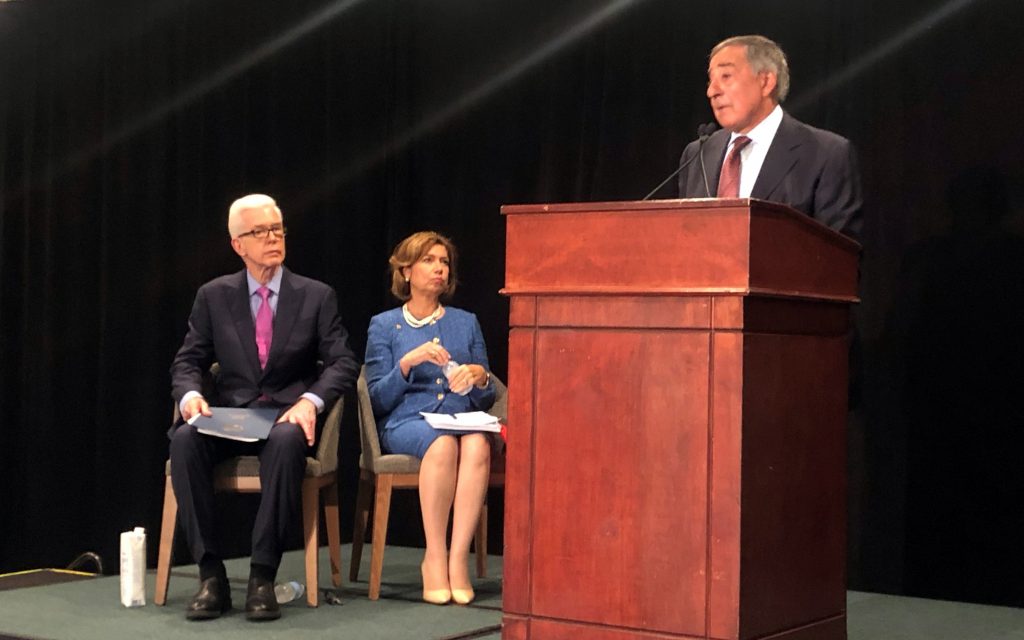 “The time for providing this program is long overdue,” remarked Panetta at the news conference.

Panetta, who served on an independent blue-ribbon panel of lay Catholics studying the causes and response to the 2002 U.S. clerical abuse crisis, recalled the panel’s conclusion that the Church’s crisis was not “a legal crisis, a media crisis, or a personnel crisis, but a crisis of trust and faith.”

“Today, 15 years after that report, the Church and all of us who are part of that faith, are finally beginning to live out the tenets of that faith,” Panetta told the room of reporters gathered at the Marriott Hotel at Los Angeles International Airport.

In a letter to the faithful, Los Angeles Archbishop José H. Gomez pointed to the archdiocese’s history of providing pastoral support and financial assistance to abuse victims.

But, he added, “we also understand that some victim-survivors are reluctant to come to the Church for assistance. Our hope with this new program is to give these people a chance to seek redress and healing through an independent program.”

“I realize, as you do, that no program, however well-intentioned and well-designed, can repair the damage done to victims and their families,” the archbishop wrote. “But I pray that this new program might provide another avenue toward healing and hope.”

In her remarks, Contreras-Sweet struck a similar tone, beginning by admitting that she was struggling with this “bittersweet moment” as a mother.

“I can’t fathom what it would feel like to be a parent of somebody who trusted their spiritual leader and was abused,” said Contreras-Sweet, who became visually emotional while speaking.

The Mexican-born business leader and former White House cabinet official thanked Catholic priests “who have sacrificed everything to serve us.”

She said she hoped the launch of this new program represented “a day, a time, and moment when we can say that the Church has pivoted and has created a new culture where everyone feels that they can report something that is inappropriate.”

“I urge every one of us to accept some responsibility to make sure that when we see something that isn’t right, to speak up about it,” she added.

The program’s rollout came three days after California’s legislature passed a bill that would rescind the statute of limitations on abuse cases of child sexual abuse. The bill, Assembly Bill 218, awaits a decision from Gov. Gavin Newsom, who has until mid-October to sign or veto it.

Since the announcement of the ICP in May, the six dioceses have been reaching out to victims who have reported allegations of abuse in the past to alert them to the new program.

Feinberg told reporters that in his experience, programs like the new one in California are about more than dollar figures.

“More often than not, it’s not about the amount of compensation. What a claimant wants when they come to us … is validation of the claim,” said Feinberg in response to a reporter’s question.

“For too long, the claimant has been denied recognition as to the credibility and validity of the claim.”

Panetta said that as a Catholic, he prayed that the program he will help oversee will ultimately “provide some semblance of justice to the victims of crimes that for too long went unpunished, and provide the remedies that for too long have been delayed.”

“It is never too late for healing,” he added.

Editor’s Note: The six dioceses participating in the ICP are encouraging victim-survivors to visit the program’s website, found here, to find out how to file a claim.