On Oct. 8, 1991, Congressman Robert T. Matsui of California addressed these words to the House of Representatives:

“Mr. Speaker, I rise today in great sadness to advise you that an outstanding citizen of Sacramento, California, Bishop Alphonse Gallegos, was tragically killed on Monday … in a vehicle accident.

“During his nearly 10 years in Sacramento, Bishop Gallegos was a forceful advocate for the concerns of Hispanics. He marched in solidarity with the United Farm Workers, opposed cuts in bilingual education, and worked with inner-city gangs up and down the state.

“He worked tirelessly to steer Hispanic youth toward education and away from drugs and crime. Replacing such a beloved figure will not be easy. We will all mourn the loss of such a giving, dedicated, and exceptional man.”

Gallegos heard the call, “Follow Me,” and followed Jesus, proclaiming the good news to all, listening to his voice in daily prayer and Scripture reading and was faithful to that call until the end of his life, bringing love, joy, and comfort to others. He did that by living the commandment of Jesus, “Love one another” — the words of his episcopal motto.

Gallegos was born in Albuquerque, New Mexico, on Feb. 20, 1931. When he was a child, his family moved to Watts, California. In 1950, he entered the Order of Augustinian Recollects in Kansas City, Kansas.

He was ordained a priest in Tagaste Monastery, Suffern, New York, in 1958. He stayed there for 14 years after his ordination, performing even menial tasks like helping as a porter and answering the phone, while also serving as master of students at the monastery and as a chaplain to religious sisters and to a local hospital and to religious sisters. 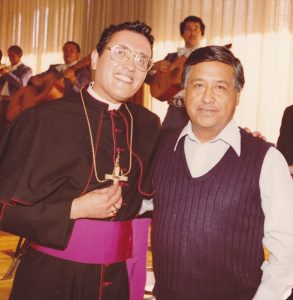 Bishop Gallegos with civil rights icon Cesar Chavez in the 1980s.(CANONIZATION CAUSE OF ALPHONSE GALLEGOS)

In 1972, his order assigned him to serve as pastor of San Miguel Church in Watts, the same parish where he’d been an altar server. Even more so than today, the situation in Watts was rife with poverty, gang violence, and unemployment.

Upon his arrival he organized the Parish Pastoral Council, wanting to get the entire parish involved in bringing the joy of Christ to the community. He would walk the dangerous streets at night in search of the “lost sheep,” the youth. He believed that education was key in order to stop the vicious cycle of poverty and violence in Watts.

In 1978, he was appointed pastor of Cristo Rey Church in the Atwater Village area of Los Angeles. Gallegos liked to walk those streets, too, greeting and encouraging his community, visiting families in their homes and eating whatever they put before him.

Gallegos’ work in the Archdiocese of Los Angeles did not go unnoticed. In 1979 he was appointed as the first director of Hispanic Affairs for California’s bishops. There he coordinated with the state’s bishops and those of Baja California to advocate on behalf of the growing Hispanic population in California. 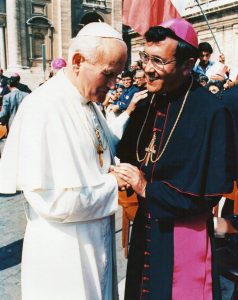 Bishop Gallegos with St. Pope John Paul II in St. Peter's Square in the mid-1980s. (CANONIZATION CAUSE OF ALPHONSE GALLEGOS)

Now based in Sacramento, he traveled up and down California and its southern neighbor, meeting with Church leaders, creating evangelizing teams and using mass media to communicate the gospel message.

On Aug. 26, 1981, the unexpected happened. Bishop Francis Quinn if Sacramento called Gallegos to set up an appointment that evening. Gallegos described that meeting in his “Diary”:

“I met the Bishop at 5:15 p.m. and he immediately told me that His Holiness Pope John Paul II had nominated me to the Episcopacy. I felt humbled and stunned. I asked if he would allow me to pray over this serious appointment. He allowed me to spend the night in prayer and asked me to call him at 8:30 the next morning. I spent the night in prayer asking the Holy Spirit to enlighten me to make the right decision and to do the will of God. I asked Our Lady to assist me to be humble and open to the will of her Son. I felt frightened and humbled. My nomination as Auxiliary Bishop of Sacramento was a complete surprise to me.

“On August 27, at 8:30 am I called Bishop Francis Quinn to give him my answer. For holy obedience to our Holy Father and strengthened by the Holy Spirit, I consented to become the Auxiliary Bishop of Sacramento and titular Bishop of Sasabe. Once I responded to the will of God a calm came over me. I then went to celebrate the Eucharist in thanksgiving and personal dedication to God and His Church.

“August 31, I prayed most especially today to the Holy Spirit that I would be a good and humble Bishop. I asked Our Lady to be with me and help me. On September 1, I celebrated the Eucharist praying especially for the grace of God to be a good, holy and humble Bishop” (Diary of Bishop Alfonso Gallegos).

Gallegos was consecrated auxiliary bishop of Sacramento Nov. 4, 1981. As bishop, Gallegos continued to do what he loved most: be among his flock, smelling like sheep. He traveled up and down the Diocese of Sacramento: confirmations, funerals, visiting the sick, jails, migrant camps, cruising with the low riders.

He had an office in Sacramento’s Diocesan Pastoral Center but was rarely found there; he spent most of his time on the road or on the street, visiting the faithful, speaking to anyone he encountered.

Oct. 6, 1991, was a pretty typical day for Gallegos. That morning he spent time with the Guadalupanas in the parish hall of Our Lady of Guadalupe Church in Sacramento helping them make tamales. Later he went to a pro-life rally, visited a young man dying in the hospital of AIDS, and in the evening presided Mass at Sacred Heart Church in Gridley, where he confirmed 50 teenagers.

On his way back to Sacramento, his 1981 Volkswagen Jetta stalled on Highway 99, losing power and lights. He and his driver discussed who would push the car off the Highway. Gallegos decided he would push the car. A car struck him, killing him instantly.

His life ended as he had spent it most of his life: on the road, in the streets, bringing the good news of Jesus Christ to his brothers and sisters.

In 1997, Sacramento erected a monument in his memory. His cause of canonization was opened Dec. 4, 2005, and he was declared venerable by Pope Francis July 8, 2016.

Gallegos is buried at the National Shrine of Our Lady of Guadalupe in Sacramento, the parish where he served as pastor for several years.

Often called “the bishop of the barrio,” Gallegos was a true missionary, a contemplative in action who had zeal for souls and was a living witness of Christ.

From a very young age, Gallegos was known for his piety; his classmates called him “el santito” (“the little saint”). He desired to follow Christ and serve him at a young age. He suffered with vision deficiency — myopia — all of his life, which presented many challenges for him. 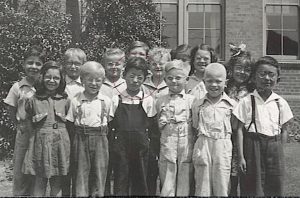 Alphonse Gallegos (circled) with classmates at a school for children with vision problems. (CANONIZATION CAUSE OF ALPHONSE GALLEGOS)

Gallegos would spend hours before the Blessed Sacrament, contemplating Jesus. He slept very little, an average of four hours, and was awake by 4:30 a.m., in prayer, as he would say, “Me and my Lord.” He was up late when he loved to read Scripture in the silence of the night, listening to the word of God. This contemplative spirit guided his actions.

The bishop had a burning love for souls, inspired by his love for Christ and his Church. He was always available and compassionate. He loved being among his people, interested in them and their concerns, which was his priority. He made his own the words St. Pope John Paul II wrote in the mission encyclical “Redemptoris Missio” (“The Mission of the Redeemer”), 89:

“Those who have the missionary spirit feel Christ’s burning love for souls, and love the Church as Christ did. The missionary is urged on by ‘zeal for souls,’ a zeal inspired by Christ’s own charity, which takes the form of concern, tenderness, compassion, openness, availability, and interest in people’s problems.”

According to John Paul II, “The call to mission derives, of its nature, from the call to holiness. A missionary is really such only if he commits himself to the way of holiness,” and as recorded in his diary, Gallegos prayed to be a humble, holy bishop upon his appointment as auxiliary bishop of Sacramento.

As he would say, “We are called to holiness but we must attain holiness.” “Bishop Al,” as he was called by many, had a profound desire to be holy.

May the example of Ven. Bishop Alphonse Gallegos and of St. Junípero Serra, great missionary of California, inspire and renew our commitment to be holy missionaries, baptized and sent, putting into practice the example of Jesus Christ and his teaching: “Go out to the whole world; proclaim the gospel to all creation” (Mark 16:15).

Father Eliseo González, OAR, is vice postulator for the sainthood cause of Ven. Bishop Alphonse Gallegos.