For best-selling German author Peter Seewald, Cardinal Joseph Ratzinger was someone "who is what he says and what he preaches." This not only mesmerized Seewald but made him fully come back to the Catholic Church. International bestsellers co-written with Pope Benedict XVI and a thick biography followed.

In a Q&A with OSV News, Seewald takes a look at the legacy of the German pope he studied and who, he believes, "will be canonized someday."

OSV News: Was Joseph Ratzinger someone who turned your life around?

Peter Seewald: I was in fact already on my way back to the Catholic Church. Me and my wife had our children baptized, but at the time of our first meeting with Ratzinger, I was not a member of the Catholic Church; I had previously left. At the time I was concerned where society goes when it separates from its roots. I saw in the prefect of the Congregation for the Doctrine of the Faith, guardian office of the Catholic Church, as someone who not only gives the impression of authenticity. I saw a person who is what he says and what he preaches -- also someone with extreme intelligence. A very clever head, who does not put himself in the foreground, but who, from the knowledge of the Church, from the witnesses of the Gospel, from the tradition of Catholicism and from his very own power of thought and inspiration, can tell you something that transforms a person of our time, a modern person. So I found out that he is a personality not only exciting and worth listening to, but also someone that moves you to follow his path, and I did that myself.

OSV News: Pope Benedict often spoke about the "dictatorship of relativism." What does he have to offer the world today?

Seewald: He was courageous in his criticism of the times -- more courageous than many philosophers and thinkers. Ratzinger warned against a development that would plunge society into problems, that we’re giving up things that it is better not to give up. In our last book together ("The Last Testament"), he also says this quite clearly: that society is at a crossroads. It has accumulated so many problems by now, not only in terms of the environment and ecology, but also in terms of human condition. Ratzinger says those problems cannot be solved if we lose reference to the creative power of God.

OSV News: "No prophet is recognized in his homeland," says the Gospel. So it seemed to have been with Pope Benedict in Germany.

Seewald: In fact those words in the Gospel seem to have been written just for Ratzinger. He was completely neglected in his homeland. He was fought against by currents of the Catholic Church that were somehow completely blocked to proceed with his way, with his ideas, with his theology and with his Catholicism in general. This has historical roots that go centuries back. Germany is a land of Reformation, that is, of the division of Christianity. And that, of course, affects the consciousness of those in charge and of the faithful in Germany.

Ratzinger started as a preserver of tradition and at the same time he was an innovator. And he was able to combine both currents. One can sum it up as renewing in preservation or preserving in renewal. And that, of course, distinguishes him from the representatives of the synodal path that is now being discussed in Germany. For Ratzinger, what was being negotiated on the synodal path no longer had probably anything to do with (the Second Vatican Council). This is the path to another church. 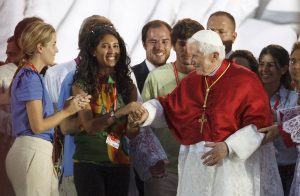 OSV News: But the tension between Germany and Ratzinger is much older, at least as old as Vatican II.

Seewald: Some circles of Hans Küng [a famous Swiss theologian and Catholic priest that in 1978 was not allowed to continue teaching as a Catholic theologian after he rejected the doctrine of papal infallibility], with strong media influence, called Ratzinger a renegade, someone who had changed theologically, who suddenly was no longer progressive, but reactionary. Black legends were formed that had nothing to do with reality. Terms coined around him such as "the grand inquisitor" or "panzer-cardinal" drew a picture of Ratzinger as a power man, a man who enjoys humiliating others, one who cannot be cordial and cheerful. In other words, a pure image of horror that had nothing to do with reality.

Seewald: It certainly occurred earlier with Ratzinger than with others. Abuse was not an issue for decades. Certainly, Ratzinger also made certain mistakes here. There are omissions, which he has also admitted. He has admitted that he should have looked more closely at some cases during his time as archbishop of Munich.

But what is important is that Ratzinger, as prefect of the Congregation for the Doctrine of the Faith, took measures to consistently investigate, punish the perpetrators and make atonement to the victims. His great admonition and his great lament at the Way of the Cross on Good Friday 2005 remains unforgotten. There, he spoke about the filth in the Church, especially among priests. Before him, no one had addressed the problem so clearly.

OSV News: But did the topic really move him personally? How did you personally experience him in the process?

Seewald: He was a very compassionate person who cared about others more than he cared about himself. And it was this terrible news about abuse, first from America, then from Ireland and from Germany and from other countries, that had taken a lot out of him.

He had immediately insisted on meeting the victims of abuse on every trip. He had cried with them and suffered with them. So it was not a marginal issue for him, but he immediately understood what is happening to the church as a whole, which has to serve as a representative for the problem of the whole society. This must always be said: Sometimes people act as if abuse only exists in the Catholic Church.

But within the church, Benedict was consistent. After all, he had dismissed 400 priests; he had not wanted to spare anyone. Conversely, he had demanded unsparing clarification and attention to the victims. One remains astonished when someone claims that Ratzinger covered up abuse.

OSV News: Do you see movements or tendencies in today's Church and in the current pontificate of Pope Francis that carry forward Pope Benedict's understanding of the Church and his theology?

Seewald: There are no large currents that would indicate now that Benedict's legacy would be received en masse and broadly. But there are great signs of hope, movements, aspirations, initiatives and people. He is seen by some as the Doctor of the Church of modernity, and not for nothing. He was certainly the greatest theologian who ever sat on the chair of Peter.

And I like to echo a statement made by his successor, Pope Francis, who, by the way, already calls Benedict a saint. Francis says that Benedict's teaching is indispensable for the future of the Church. From generation to generation, he says, it will appear ever greater and more powerful. And I am also convinced of that. I think Benedict XVI will be canonized someday and his work cannot be taken out of the world. It will bear fruit anew.

Thomas Kycia is an OSV News correspondent who writes from Berlin.