What I learned walking in St. Junípero Serra’s footsteps

In his homily for the Mass and canonization of Blessed Junípero Serra on Sept. 23, 2015, Pope Francis shared, “Today we remember one of those witnesses who testified to the joy of the Gospel in these lands, Father Junípero Serra. He was the embodiment of ‘a Church which goes forth,’ a Church which sets out to bring everywhere the reconciling tenderness of God.”

I was so inspired by the pontiff’s words that I made a promise to myself to learn the stories of early Catholic Christians who shaped California’s history with the hope that they would inspire me on my faith journey. What ended up happening, though, was a profound transformation of how I understood my place in “a Church which goes forth.” 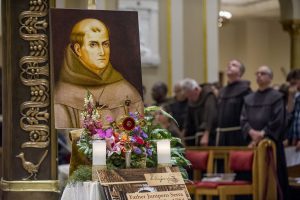 An image of St. Junípero Serra is displayed as Franciscans celebrate his canonization with a Mass of thanksgiving at the Franciscan Monastery in Washington, Sept. 24, 2015. (CNS photo/Karen Kasmauski)

I am not exceptionally athletic. At my annual physical, I can only boast to my doctor of getting off the couch for one to two hours per week. However, in 2010, I watched “The Way,” a film about the Santiago de Compostela pilgrimage in Spain. I became fired up to do it. But it took seven more years for me to translate motivation into action. 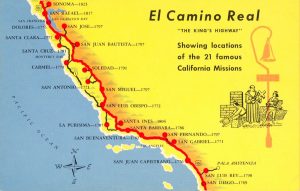 In 2017, I found myself at the California Missions Foundation Conference in Solvang at Mission Santa Inés. There I met a few members of the California Mission Walkers, a group of people who enjoy, literally, walking in the footsteps of the padres. I thought that doing this would help prepare me to do the ancient pilgrimage route in Spain.

As a veteran Catholic schoolteacher, my hope was to become intimately knowledgeable about the lives of the amazing people who were the first Catholics in California — Indigenous, Spanish, Mestizo — with the goal of becoming both a better Catholic and teacher. Coincidentally, I started my walk in 2019, the 75th anniversary of Serra High School in San Mateo, my alma mater and employer. It was also the 250th anniversary of the founding of the first California mission at San Diego. 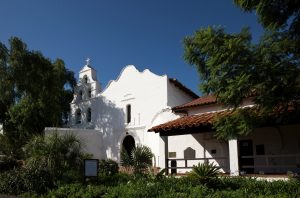 The Mission Basilica San Diego de Alcala in San Diego, established in 1769, was the first in a string of missions Spanish Franciscans set up along the California coast. (CNS photo/Nancy Wiechec)

On the 800-mile journey, I learned stories of early Catholic Christians in California that have inspired me. Their history made me consider the words of the Alexandrian theologian Origen, who wrote of pilgrims to the Holy Land searching “after the footsteps of Christ.” I walked after the footsteps of St. Junípero and others who planted, tilled, and drank of the living water that only Christ offers. I saw this living water more clearly because of them.

While on the pilgrimage, I met people who have greatly inspired me and strengthened my faith. I met a two-time cancer survivor who not only walked the California Missions Trail, but also the equally long trail of the Spanish missions in Baja. She is the embodiment of St. Junípero’s motto, “Ever forward!” 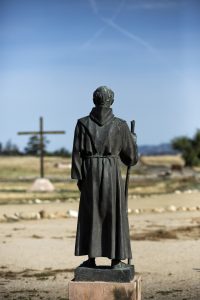 I was fortunate to be hosted by a Lay Franciscan who taught me lessons on friendliness. I was dropped off at Mission San Diego by a history professor at a Protestant university who is as passionate about the missions as I am. He taught me about ecumenism. I was honored to meet the man who was one of the first to walk the California Missions Trail since the last padre did it; I had the pleasure of walking with a man near the soon to be consecrated Christ Cathedral in Garden Grove.

He told me all about the transformation of the once Protestant house of worship into a Catholic cathedral, and how he hoped to attend the consecration and renaming ceremony, even though he was not Catholic. I was cut to the heart when a fellow walker shared with me the story of her aged mother who lost her faith after the loss of her child. And after a long day of walking, I entered Mission San Fernando to find a group of people being baptized. I felt the presence of the Holy Spirit like never before.

If I never decided to understand what it means to be a part of “a Church which goes forth,” I would have missed out on these experiences and encounters, which have helped me to keep moving forward.

Christian Clifford earned a bachelor’s degree from the University of Great Falls, Montana, and a master’s degree from the University of San Francisco. He is a veteran Catholic schoolteacher and author of books about Catholic Church history in Spanish-Mexican California as well as numerous articles on the subject. He has been a guest speaker on radio and to school, church, and service groups. For more information, visit www.Missions1769.com.