‘This is what we’re for’: LAPD officers call in spiritual backup during pandemic

As those working in the Los Angeles Police Department (LAPD) continue to navigate the realities of upholding the motto “To protect and to serve,” the coronavirus (COVID-19) pandemic has added more layers of anxiety and trepidation.

But there has been evidence of officers leaning deeper into their faith through the help of Catholic clergy over the last several months, too.

Father German Sanchez, in a Mass livestreamed through Zoom and the parish’s Facebook account, recognized the officers’ call to duty and offered their prayers to end the pandemic.

“Very often I pray for those on the frontline, those who expose their lives and families to help society,” Father Sanchez said to start the Mass. “Today I invite you to pray for another group — the police. We want to say thank you for your mission, for everything you do for our society in creating peace. You and your family are in our prayers always.”

In his homily, Father Sanchez talked about how “in a crisis situation, it is important to remember God is with us and can enlighten us, guide us, protect us, help us to live with confidence with a life of solidarity with those who are suffering. We are responsible for not just our lives but our brothers and sisters. We have a strong weapon: prayer.”

The LAPD counts more than 9,000 sworn officers among its 13,000 employees, and has been posting frequent updates on how it is dealing internally with the coronavirus cases. Recent reports indicate that more than four dozen LAPD employees have tested positive, some hospitalized. An outbreak has also occurred at the LAPD training center in Westchester.

As LAPD Chief Michel Moore seeks more tests for all officers, ongoing projects such as “Operation Blue Heart” have been in force, with officers volunteering to run errands for at-risk residents.

Deacon Jim Carper, the parish life director at St. Bernadette Church in Baldwin Hills since 2016, is also acting president of the LAPD Clergy Council at the Southwest Division, headed by Captain Billy Brockway.

Said Carper, “Police officers may have all kinds of backup, but they need to know that somebody spiritually has their backs.”

Thank you to Deacon Jim for coming to every roll call to pray over our Officers. Deacon Jim is the president of LAPD Clergy Council. pic.twitter.com/Ny1Cxnc56t

Carper, a deacon since June 2012, is the only white Catholic on the LAPD Clergy Council for the Southwest Division, which includes Hispanics and African-Americans who come from other Christian denominations. Carper said the coronavirus pandemic “has drawn us all closer because it has a leveling effect, it doesn’t discriminate and we’re all equally at risk.”

As the council meets weekly — lately, in hour-plus video gatherings — prayers are always offered for the police, the community, and for a coronavirus cure.

“It is amazing to hear all the different races, colors, creeds, and Christian denominations pray together, and often LAPD captains come on the call to listen as well,” said Carper, noting they also had an officer join who had tested COVID-19 positive. 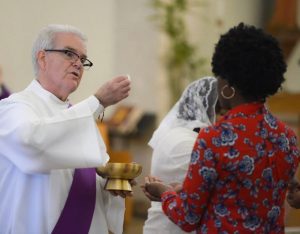 The LAPD Clergy Council is one that basically is “a ministry of presence, to be there and listen,” said Carper. On the recent Ash Wednesday when he distributed ashes at the station, Carper said many other non-Catholic officers accepted his offer to bless their shields, “because it was a way to reach out and touch them.

“Police have such a high level of stress on their job and to have someone who can show up for them, pray for them, even if they aren’t Catholic, you become a representative of the community,” said Carper. “This is what we’re here for.”

Deacon David Smith, based at St. Julie Billiart Church in Newbury Park, is in agreement.

In 2000, Smith retired after 29 years serving on the LAPD, the last eight as a captain in West LA. At one point before his LAPD career, Smith entered the seminary. He completed the diaconate program in 2007.

“My journey has always been about trying to find God in the places where we are, and those who are the first responders have the toughest jobs,” said Smith. “There are a lot of brave men and women who respond to the call of duty and place their lives in danger to help someone else. Many times they don’t get much credit — [they] often get more criticism than praise.

“What I saw through my career is that, in the police department, if you realize God’s in your life, you can tell by the way the officers, lieutenants, sergeants, and captains respond and are willing to give of themselves and have a better relationship with the community. Police officers want to make a difference, but they can be affected by the crimes they see and the victims they often meet. They can see a lot of evil.”

Smith recalled watching how the work of now-retired Father Mike McCullough during his 40-plus years as the LAPD’s full-time chaplain (as well as working simultaneously with the FBI) helped bring about an attitude change. Father McCullough was also a graduate of the police academy and a reserve officer.

“But now I think during this COVID-19 crisis, a lot has changed, asking police officers to be even more in harm’s way,” Smith added. “This is also a time when police won’t do a lot of traditional enforcement. Arrests are down, but crime seems to be down as well. People are seeing police bringing food to families in need and doing more outreach. It’s an important message that leads to great results. The police have responded and that’s the good news of serving one another.”

Father Steve Davoren, ordained in 1996 and installed as the pastor at St. Mel Church in Woodland Hills in July 2018, also understands both sides of this.

During his role for several years recently as director of Vocations in the Archdiocese of Los Angeles, he could relay his experience serving as an LAPD officer in the 1990s and, before that, three years with the LA Sheriff’s Department.

Like his father and three brothers, Father Davoren believed he would become a career police officer. Even though he eventually answered the call to the priesthood, his mind is never far from the LAPD force.

Davoren likes to cite the work of his brother, Tom, a member of the LAPD Metro Bomb Squad, who “calls on his faith to remain calm in traumatic situations, stay steady and focused and centered.” 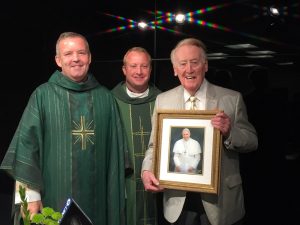 “Any first responder knows that each day is different and can change in an instant from calm to chaotic,” Davoren told Angelus. “What is, I think, so important for our Catholic faith — and any faith — is having that anchor, that rock, that you come back to. It’s a faith in Jesus, the ability to rely on the word and the sacraments. You need that sense of moral center in believing in something bigger than yourself.

“It’s really an act of love in putting yourself at risk to will the good of the other, that love is manifested in different ways and the Catholic community is all the parts of the body of Christ and laying down one’s life,” said Davoren.

“With having to protect people during COVID-19, and everything that keeps changing and becoming uncertain, maybe you don’t feel you can rely on anything. But the one thing you can rely on is the Faith.”

Saint of the day: Benedict of Nursia