Ten-year-old Andy Goska knew the special dignitary in town from Poland was a big deal. But it would take a couple of years before he would understand just how big.

“I really didn't know much about cardinals back then,” admitted Goska when asked about the time Cardinal Karol Wojtyla visited Our Lady of the Bright Mount Church in the West Adams area of Los Angeles in 1976.

“But when he did show up,” Goska said, “even as a child you got such a good, strong feeling of a presence there, which was kind of hard to explain as a child who was 10 years old.”

Goska is one of a handful of Polish Catholics in the LA area who still remember the time the then-archbishop of Kraków visited LA, two years before his election as pope and 11 years before his return to Southern California on a papal voyage.

Thanks to his membership in both the parish’s dance ensemble (“Krakusy”) and the local Polish Boy Scout troop, Goska had a front-row seat to history.

His Krakusy director picked up the 56-year-old cardinal from the airport (where he was greeted by young people in traditional Polish dress) Aug. 29 and drove him to Bright Mount’s parish rectory to spend the night. The next day, he celebrated a Mass in Polish for parishioners marking the parish’s golden jubilee. 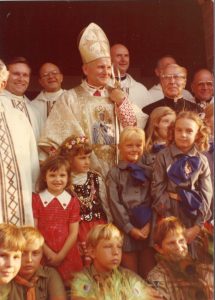 Cardinal Karol Wojtyla poses with children after Mass at Our Lady of the Bright Mount Church during his first visit to LA on Aug. 29, 1976. In the bottom right corner is Andy Goska, then 10 years old. (Tidings archives)

“I remember after Mass how he took the time to greet each and every individual child, whether it was just a handshake, or a hug,” Goska told Angelus. “That was something that I'll never forget.”

Afterward, Cardinal Wojtyla joined his countrymen for a post-Sunday Mass tradition still practiced by parishioners at Bright Mount: a traditional Polish meal in the parish hall. Among parishioners, what happened next is the stuff of legend.

Moved by the remarks given by Cardinal Wojtyla from the parish hall’s stage during dinner, one woman is said to have acclaimed in a loud voice: “He should be the next primate of Poland!” referencing the title traditionally ascribed to Poland’s highest ranking bishop.

But another woman in the room was quick to shoot back: “No, he should be the next pope!” The room erupted in laughter.

Years later, the woman was able to meet St. Pope John Paul II at an audience in Rome. And she couldn’t help reminding him of that evening in Los Angeles. 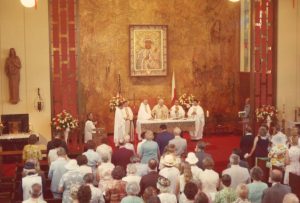 Cardinal Karol Wojtyla celebrates Mass at Our Lady of the Bright Mount Church for the parish's golden jubilee in 1976. (Tidings archives)

Cardinal Wojytla’s visit to LA came as Poland was under Soviet Communist rule, which made his presence a consolation for local Polish expatriots anxious about the situation in their homeland.

“In Poland we are always demanding true religious freedom.” said the cardinal in an interview with the editor of The Tidings at the time, Al Antczak, during his stay at Bright Mount.

Cardinal Wojtyla also spoke candidly about some of the other themes that would come to define his pontificate. Calling the “new morality” brought on by the sexual revolution “incompatible with the dignity of man and woman,” he said deeper preparation for marriage was needed in the face of a “permissive reality.”

“Married life demands a fruitful continuity. How can human dignity be conserved if a woman is a mere object of use?

Cardinal Karol Wojtyla is interviewed by Tidings editor Al Antczak during the future pope's visit to LA in 1976. (Tidings archives)

“Freedom is not that I can do what I want, but to realize and know true good and then choose the true good,” continued Cardinal Wojtyla, already composing a rough draft of what would become one of the most well-known maxims of his papacy.

The prelate also lamented the legality of abortion in Poland and in the U.S., where it had been legalized only three years earlier.

“If children know their parents can kill one of them, and if they have already killed one of them, that is a tragic diminution of family stability.”

Recalling the interview after the late pope’s death in 2005, Antczak described the cardinal as “a very strong, energetic man who positively radiated energy.”

“He spoke with great conviction, and in our interview he was very direct and forthright. My impression was of a man reared as a strong Pole, used to hard work and a hard life who knew how to survive.” 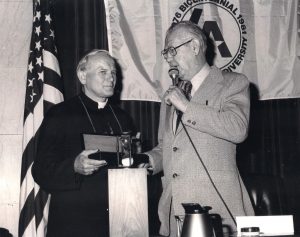 Cardinal Karol Wojtyla presented a special medal commemorating the 900th anniversary of the patron saint of Poland, St. Stanislaus, to LA City Councilman John S. Gibson Jr. during his 1976 stop in LA. "It should be noted that his Eminence Karol Cardinal Wojtyla will be among those considered to be the next pope of the Roman Catholic Church. Therefore, this particular medal is of great value to the City of Los Angeles," read a memo sent Sept. 1, 1976, by the LA mayor's office to Gibson. (Tidings archives)

During the late summer visit of 1976, Cardinal Wojtyla toured parts of Los Angeles, making stops at St. Vibiana Cathedral, Marineland of the Pacific (an oceanarium in Palos Verdes that closed in 1987), Griffith Observatory, Forest Lawn Cemetery in Glendale, and Los Angeles City Hall, where he presented the City Council with a special medal commemorating the 900th anniversary of the death of St. Stanislaus, the patron saint of Poland.

Perhaps the most well-known anecdote from the visit comes from Msgr. August Moretti, who’d met Cardinal Wojtyla two years earlier at a conference in Rome. In a 2005 interview with The Tidings, Msgr. Moretti recounted to R.W. Dellinger, Angelus features editor, how the two friends belted out an Italian classic while driving down the Harbor Freeway on their way to Palos Verdes.

“He knew ‘Santa Lucia,’ so we both sang,” said Msgr. Moretti, who was director of the archdiocesan tribunal at the time of the visit and who died in 2009. “He had a good voice and loved to sing.”

For Goska, the 1976 visit would not be the last time St. John Paul’s life intertwined with his. In June 1999, he and a friend were vacationing in Poland at the same time that St. John Paul was visiting. They added the pope’s outdoor Mass in Kraków to their schedule.

A few days before the Mass, a woman Goska had met caught his eye, so he asked her out on a date. But he had a problem.

“I forgot that I was going the next day to go see Pope John Paul, so I told her: ‘You know what, I’m going to wait till I come back from seeing Pope John Paul, and she said, ‘By all means, give me a call.’ ” 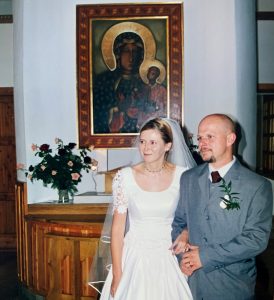 Andy and Barbara Goska at their wedding at St. Theresa Church in Rabka Zdroj, Poland on July 1, 2000. Karol Wojtyla preached to youth several times at the church as a young priest.

Goska and his friend made the long, early morning trek to the site of the Mass in the pouring rain only to find out that the pope had fallen ill with the flu. The pope never showed up.

But when he got back, Goska went on that date with the woman, named Barbara, whose family had known Cardinal Wojtyla from his visits to their parish as a priest and bishop, and from the retreats he held for young people.

Now married with two children, the couple drives more than 30 miles from Orange County every Sunday to attend Mass at Bright Mount. They will celebrate 20 years of marriage this July. And they have one person they still thank.

“It’s kind of funny,” Barbara said in a phone interview. “Sometimes we can only laugh at how John Paul II brings people together.”