There was meaningful magic to Tom LaBonge’s modus operandi.

Strategic thinking, friendly cajoling, and a passion for including everyone on an accomplishment were his hallmarks on a multitude of projects during 14 years as a Los Angeles City Council member for the Fourth District, and a total of four decades of service to the city.

That was pretty much the same way he’d determine which pew to swoop down upon for 5 p.m. Saturday Mass at St. Brendan Church in Hancock Park.

“I would be up at the altar and I could see all this taking place — he’d never come early, then he’d stand in the back looking around, plotting out who he’d want to sit next to,” said Msg. Terry Fleming, who retired last year as the pastor of St. Brendan’s after 16 years. “Usually that person would be deep in prayer, and they’d be startled by him when he showed up.

“Then he’d have to be the first out of Mass to talk to everyone coming out.”

When LaBonge suddenly died of cardiac arrest at the age of 67 at his home on Jan. 8, the city of Los Angeles’ heart skipped a beat in sorrow. He is survived by his wife of 41 years, Brigid, their two children, and five surviving brothers. 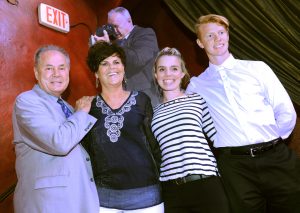 A cardboard cut-out of Tom LaBonge takes a photo of LaBonge with his wife Brigid, daughter Mary-Catherine and son Charles. A farewell party was held for Los Angeles City Councilman Tom LaBonge at the Avalon in Hollywood, CA, in 2015 (John McCoy)

Known by many of his constituents and peers as “Mr. Los Angeles” for his unabashed enthusiasm and pride in continuing a legacy for the city and its historic landmarks, he has been heralded for efforts to preserve and expand Griffith Park and its observatory, conserve and celebrate the Los Angeles River, and championing the city’s 1984 Summer Olympics bid, as well subsequent ones since 2000.

LaBonge’s DNA for community service could be traced to growing up in Silver Lake with his large Irish Catholic family traditions.

Thomas Joseph LaBonge was born on Oct. 6, 1953, the seventh of eight boys spread over 20 years to Robert and Mary Louise LaBonge, with a family lineage in the city going back to the late 1800s. Robert once worked as the managing editor of The Tidings, the predecessor of Angelus. He died when his son Tom was just 17.

Mary Louise was the daughter of an Irish Catholic LAPD officer.

Tom attended the nearby Our Mother of Good Counsel School in Los Feliz, as did many of his older brothers, until his parents put him in the public school track, through John Marshall High School. A walk-on football player at Cal State San Luis Obispo, he transferred to Cal State Los Angeles with a degree in sociology.

“I got a great letter once from a 92-year-old monsignor who knew all my family when we were growing up,” LaBonge once said in a 2008 interview with a Los Angeles City Employee newsletter. “He was very complimentary to how he remembers all of us growing up and playing.”

After putting in 15 years on the staff of Los Angeles City Council with John Ferraro, whom he saw as a father figure, LaBonge was voted into Ferraro’s seat upon his death in 2001. LaBonge thus became the representative of that same district he grew up in — it covers much of Hollywood, the Fairfax District, Mid-Wilshire, the Miracle Mile, Griffith Park, Silver Lake, Koreatown, Los Feliz, and portions of Sherman Oaks and North Hollywood.

On his desk was a first-class relic of St. Junípero Serra.

LaBonge retired in 2015 and started his own consulting business, conversing and canoodling until the end, still lobbying for more than just repaved streets, better trash pickup or fixing streetlights.

“The last time I saw him was about a week before he died, at the Sunday Larchmont Farmer’s Market,” said Marge Graf, the legal counsel for the Archdiocese of Los Angeles and a fellow St. Brendan’s parishioner.

“He saw me, pulled up, stopped, parked across the street, followed me into the market and wanted to talk about how concerned he had been about the homelessness in the city of LA, and if the church might partner with him in identifying available spaces for shelter.

“That was his constant theme: Treat the city of Los Angeles as if it was a small town, expecting neighbors to help neighbors — and he was one of the best neighbors.

“He was a consistent, present Catholic who used his faith as the framework of his mission to give and share,” Graf said. “His religion was not a convenience.”

Then there was the pumpkin bread.

The Monastery of the Angels, located in LaBonge’s district sitting downhill from the Hollywood sign, was his go-to place to support the cloistered Dominican Contemplative Nuns, ordering loaves by the dozen and loading them into the trunk of his city-issued Ford Crown Victoria, complete with a police radio under the dashboard. 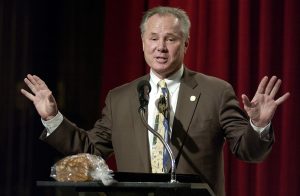 Tom LaBonge at a ceremony at CBS Television City in 2005, with a loaf of pumpkin bread. (Amanda Edwards/Getty Images)

From her place in the monastery gift shop, Sister Mary said she would see that same faithful generosity in LaBonge as he would arrive at the steps outside the facility, last seeing him just days before Christmas for his latest order to distribute.

“We were trying to close, but he would say, ‘Sister, I need the bread and people are working so hard and I want to give them something for their hard work,’ ” said Sister Mary with a laugh. “It was like having Santa Claus come by all year around.”

Sister Mary said it was her understanding that LaBonge’s mother took him as a young boy to the monastery for visits, the beginning of a lifelong connection to the pumpkin bread. When she later died of cancer, the visits became a way “to remind him of her, having loved her so much,” said Sister Mary.

Dave Lopez, who retired last June after 48 years as an Emmy Award-winning Los Angeles TV reporter covering City Hall, among other things, said LaBonge tracked him down at his going-away party at Phillipe’s restaurant and had pumpkin bread for him.

“Here we have the pandemic raging, and he’s still popping up everywhere, especially if there was a party,” said Lopez. “He told me it was an honor to be interviewed by me over the years, then he brought out this bread and tells us the story about how this is the greatest we’d ever have, and gave me a big hug. The bread was great, but I think I only got one bite of it.”

Talking to Angelus about his memories of Labonge, Lopez recalled an especially poignant moment in 2013.

Lopez’s wife of 43 years, Elaine, his high school sweetheart from South Gate, had recently passed away from liver disease. He said he was still deeply grieving from the difficult loss when he tried to go back to work on an assignment.

“I think I snapped at someone, lost my cool,” said Lopez. “Tom was there. Our cameraman took him aside and said something. Then Tom came over, put his arm around me, and said, ‘Listen, I heard you’ve lost your wife. I know you’re Catholic. I am too. This is tough to accept.’

“It was like he was my big brother, even though I was older. We had this very nice, calming conversation that really was marvelous. I had interviewed him numerous times and I found him to be one of the few politicians who didn’t give you the run-around. He was always upfront, refreshing, friendly. There weren’t too many like Tom, and the world needs more like him.”

A 2009 profile of LaBonge in Los Angeles Magazine noted that “his motto, ‘Enjoy and love the great city of Los Angeles,’ is not just a slogan but a credo, a principle, sometimes even a prayer.”

Sandra Lujan Stresak, hired by LaBonge in 1993 as a mayoral area representative when Richard Riordan was elected LA mayor, recalls that he ended every phone call and letter with that exact phrase.

Stresak, now living in Sacramento and having known LaBonge for nearly 30 years, said from her vantage point, “Tom may be best known as ‘Mr. Los Angeles,’ but I’d like to think he was our angel in the City of Angels; he was made for LA,” said Stresak, who now lives in Sacramento.

“Tom served God every day by being a great humanitarian. … Wouldn't it be great if we could honor Tom’s memory by loving each other and our families; showing kindness to our neighbors and communities; loving our parks and by giving our family and friends pumpkin bread from the Monastery of the Angels.”

LaBonge was also a frequent attendee at the St. Brendan’s 8 a.m. daily Mass, still dressed in his jogging clothes after finishing one of his 5 a.m. hikes up to Griffith Park’s Mount Hollywood.

“When you start here every day, it’s like going to heaven,” LaBonge once said about that spot more than 1,600-feet above sea level, with panoramic views of the city below as well as the San Fernando Valley.

At that site, bundles of flowers and a framed photo of LaBonge are now there in his honor.