Jordan Mangaliman remembers waking in the middle of a mid-December night to sweet and savory scents as his parents cooked 300 Filipino sausages before a 4 a.m. Simbang Gabi novena Mass. The church would be packed for the procession with “parols,” star-shaped ornamental lanterns. Afterward, everyone feasted on the sausages and other delicacies.

In this year of COVID-19, Simbang Gabi will be ascetic. A curfew prohibits traditional 4 a.m. celebrations. The 10-person limit on indoor gatherings means that Mass will be livestreamed or celebrated outdoors. Singing is out, as is gathering to eat.

But those are mere outward expressions of an inward celebration, as believers accompany the Virgin Mary on a nine-day journey to Bethlehem, said Mangaliman, 29, the co-founder of a financial services company who devotes weekends to youth ministry at St. Mary Magdalene Church in the Mid-City area of Los Angeles.

While “parols” won’t be carried in procession, many Filipinos display them outside their homes, said Giselle Victorio, Mangaliman’s partner in business and youth ministry.

“The ‘parols’ are a sign of the spirit of Christmas,” she said. 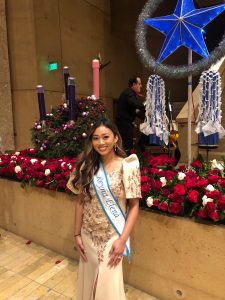 Giselle Victorio was crowned "Reyna Elena" ("Queen Helen") in 2019, as part of Santacruzan, a traditional Filipino ritual pageant held in May, honoring the finding of the true cross by St. Helen. As the "Reyna Elena," Giselle introduced last year’s Simbang Gabi festival at the Cathedral of Our Lady of the Angels. (Submitted photo)

The nine days of Simbang Gabi begin every Dec. 15. In LA, the celebration’s opening Mass is celebrated annually at the Cathedral of Our Lady of the Angels. Distinctly Filipino, but with notes of gospel choir, praise festival, and Broadway musical, it has opened with women dressed in a kaleidoscope of full-skirted, full-length dresses moving in choreographed unison to contemporary hymns. A brass band led the procession of “parols” representing hundreds of parishes and ministries.

“It really wakes you up,” Mangaliman said. “It’s very charismatic and alive in the Spirit.”

This year’s cathedral celebration, with Archbishop José H. Gomez, will be available for participation only via livestream, starting at 6:30 p.m. with a display of the “parols.”

All of that is a far cry from its inception in the 17th century, when missionaries from Mexico created the pre-dawn novena so Filipino workers could participate before going to the fields. They called it “Misa de Gallo” in Spanish (“Mass of the Rooster”) because it began when the roosters crowed. When it became an after-work celebration in the United States, the name changed to “Simbang Gabi,” Tagalog for “Evening Mass.”

“By 6 a.m. in the Philippines, the sun is already scorching,” he said. “The first thing they do in the morning is to give praise to God and worship to God before they go to work.”

The COVID-19-induced shift to outdoors is a return to the novena’s roots, said Patty Santiago, president of the archdiocesan Filipino Ministry.

“This is how it started with the missionaries before the church was built,” she said.

Her own parish, Our Lady of Peace Church in North Hills, isn’t holding a Simbang Gabi Mass this year. Most of the organizers are over 65, she said. In addition to COVID-19 concerns, they can’t tolerate the cold, damp evening air. “They will just attend livestream,” she said.

COVID-19 has been hard on the Filipino community locally and worldwide, she said. Two of the most popular professions for Filipinos are nursing and service on cruise ships. Nurses have been stressed or sick from working the front lines of COVID-19, and the cruise workers have been laid off for months.

“So, they picked a really good theme for this year’s Simbang Gabi. The theme is ‘Gifted to be messengers of hope,’ ” she said.

It was chosen in January, before COVID-19 was even a thought, said Edna Cristobal, chairperson of the 2020 Simbang Gabi cathedral celebration.

“God has given us Jesus as our gift, the greatest gift of all, so that we could be gifts to each other,” she said. “In this time of pandemic, we can give people hope to not be afraid — just as the angels told the shepherds not to be afraid — to know that God loves us, and that we should be good and kind to each other with masks and social distancing.” 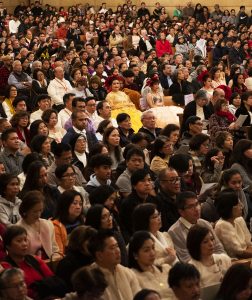 Thousands packed the Cathedral of Our Lady of the Angels for the 2019 Simbang Gabi Mass. This year's cathedral Mass will be live-streamed due to COVID-19 restrictions, but parishes around the Archdiocese of LA will be celebrating outdoor in-person masses. (Victor Alemán)

Rhomie Ramierez, a real estate broker from St. John Baptist de la Salle Church in Granada Hills, has seen the virus take its toll on people’s spirits. In the past he stopped in church daily to praise and thank God for his blessings and seek his guidance. Now he gives thanks that he can still receive Communion at a drive-in Mass and pray with others over Zoom.

Twin sisters Norma Habunal and Nora Simbulan are self-described senior citizens from St. Basil in Koreatown, where Simbulan is the RCIA coordinator and Habunal prepares children for first Communion. Although their parish will be hosting an outdoor Mass, they will join Simbang Gabi via livestream. Both are delighted that they have become technologically adept enough to do so.

“In spite of the restrictions, the parishioners have become closer through the use of social media and phones and Zoom,” Simbulan said.

“There will be more people from other states and other countries watching through Facebook or YouTube,” Habunal said.

Volunteers are preparing take-home bags of food for participants at the outdoor Mass.

“The younger ones are doing it,” because so many longtime volunteers are at high risk, Habunal said. “We want to keep it alive. It is a beautiful tradition.”

A full schedule of the Los Angeles churches hosting Simbang Gabi Masses can be found here.