In the darkness of an early Saturday morning last March 19, Father Steve Davoren and his golden lab, Blue, came out the back exit of the rectory at St. Mel’s Church in Woodland Hills for a pre-dawn run.

But before he could start, the priest’s heart sank when he saw what the floodlights pointing at the church’s iconic statue cluster of Jesus and three children revealed.

Grainy security footage only captured the arm of a person repeatedly swinging an unidentified weapon at the statues. Pieces fell from what has been a longtime centerpiece of the parish, in a highly visible spot off of busy Ventura Boulevard.

Chunks of the marbled concrete that came off the twisted, exposed rebar were everywhere: in the raised flower bed flanked by white rose bushes, in the parking lot, on the sidewalk next to the parish office.

Father Davoren immediately called the church’s business manager, Lisa Feliciano, who threw on a hoodie and came right over.

“It was horrific,” said Feliciano. “But now we were putting pieces in a box, crying. I couldn’t believe anyone could have this much hate to do this.”

Feliciano filed a police report along with the surveillance video, which she described as “two minutes of torture.”

“I see it and it still makes me cry,” she said. 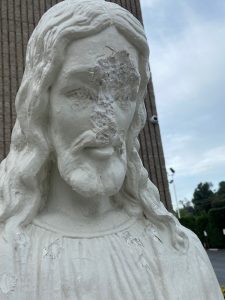 Details of the damaged statues of Jesus. (Michael Stucchi)

It fell to Father Davoren to explain the attack to parishioners the next day at Sunday Masses, preaching understanding and forgiveness in the place of anger and frustration.

“To me, the irony of this was the person who did this had to be a broken person himself,” said Father Davoren, pastor at St. Mel’s since 2018. “Through Scripture we know we need to pray for people who feel they have to destroy.”

Michael Stucchi heard Father Davoren’s message loud and clear that weekend. A systems software engineer by trade, Stucchi has found satisfaction working for the parish to restore four in-church statues in the past as well as Nativity scene statues.

He has been their humble go-to, fix-it man. But this was something bigger.

“When I spoke to Father Steve about it a few days after it happened, I admit, I was angry, mad, indignant because the statues were special to me and my family,” said Stucchi, whose son works in the parish office. “But then I heard his sadness and concern for the mental state of the person who damaged the statues. That’s so much like him. This really altered my paradigm from reactive to proactive — to ask if I could look into ways of repairing them.

“Father Steve’s compassion is what Jesus would want us to have. All the people who work here are in the same mindset of love and forgiveness. We have no idea what terrible things are in that person’s life.”

Stucchi and Feliciano started the reconstruction by collecting and studying photographs of the statues to examine all their features. The depiction of Jesus is about 6 feet tall and weighs about 1,000 pounds; each child on its own concrete base weighs about 300 pounds.

The collection dates to the 1950s, when the parish was first built. It had once been part of a fountain display in front of the school office and later relocated near the church’s west doors in the 1990s when the new parish center was built.

Feliciano had contacted the archdiocese about filing an insurance claim, and was told it might cost as much as $30,000 to repair.

Stucchi said he could take care of it, with no charge to the parish.

That didn’t surprise Feliciano, who calls Stucchi “a true angel.”

“Look at the difference between someone filled with hate and destruction … and then someone like Michael who spends his time showing pure love and joy putting it back together,” said Feliciano. “Both are our neighbors, they live among us. How can there be such a vast difference in someone’s heart and soul?” 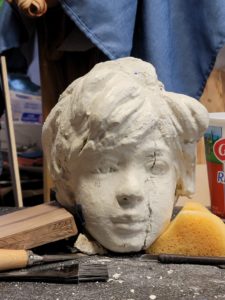 Stucchi has pieced together the statues to where they may even be in better condition when finished. (Michael Stucchi)

Stucchi experimented with different combinations of compounds — crushed marble, white Portland cement and waterproof exterior grout. Most of the work had to be done on site, with some pieces taken to his home garage.

“I was super cautious about not making anything worse,” said Stucchi, noting the materials often dried too quickly in the summer heat, causing more delays. “The saddest part to me was the damage to Jesus. We know enough about the pain and suffering Jesus went through in his life, but to see an image of him obliterated, that’s too much.”

Slowly and meticulously, Stucchi has pieced together the statues to where they may even be in better condition now because of the ways weather and age already caused cracks and decay before the vandalism.

“As a priest’s sacrifice and commitment are beyond my comprehension or capabilities, having seen their dedication and that of the other volunteers and staff, I felt it’s the least I can do,” said Stucchi. “Notwithstanding, the Catholic Church was always there for me when I was a child and young adult.”

From a business perspective, Feliciano said the experience has taught her about the need for better security. The statues also were previously vandalized in 2021 when someone painted the faces a green color, but they were easy enough to repaint white.

“As a parishioner, the kindness of Michael reminds me that there is goodness in the world,” said Feliciano, who noted the 100 degree days Michael spent with the statue last summer. “I am reminded to pray for the person who was filled with enough hate to do the damage and thank God for blessing us with Michael.”

Father Davoren believes that “to some degree, we’re all broken and damaged, but our faith in the love of God allows people like Michael the tenderness to painstakingly put those pieces of the statue back together.

“It’s about giving people the right amount of grace to rebound in their lives.”