By the time the annual gala for St. John’s Seminary returns to the Plaza at the Cathedral of Our Lady of the Angels on Sept. 18, it will be a full two years since supporters have been able to meet in person to celebrate the successes of the alumni from the Camarillo campus.

COVID-19 restrictions led to a virtual event in 2020, but it still was one that St. John’s Seminary board president Dan Schwala called “very successful” and marked by generous contributions from benefactors throughout the archdiocese and beyond.

That included a Daniel Murphy Foundation grant of $250,000 to upgrade classrooms into the digital age with technology enhancements as well as more renovations and repairs. More than $100,000 also came from the seminary board of directors.

Schwala is counting on having a reenergized fundraising effort as three priests who were scheduled to be recognized in 2020 will now be honored for their service:

Also, Christopher and Laura Meissner will be recognized with the Evangelii Gaudium (“Joy of the Gospel”) Award for their longtime support of St. John’s Seminary and their years of service to the church and to the wider community. Christopher Meissner, president and CEO of Meissner Filtration Products, has been on the St. John’s Seminary board since 2010. 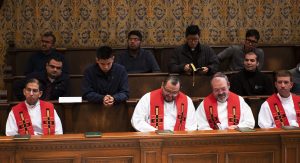 Priests and seminarians pray during the visit of a relic of St. Oscar Romero to St. John's Seminary in Camarillo in October 2019. (Victor Alemán)

“What better way to have a good time and to hear the vocation stories of our alumni firsthand than under the stars at the beautiful Cathedral Plaza,” said Schwala. “It brings us back to understanding that young people’s call to the religious life is something we all need to contribute to, to nurture, and support. The annual gala is a celebration of our faith.

“One of the previous Evangelii Gaudium honorees once said at the end of the evening that the event ‘makes a person proud to be a Catholic.’ I think everyone who has ever attended a seminary gala celebration feels the same.”

For St. John’s Seminary rector Father Marco Durazo, the ways in which Catholics persevered to stay connected with the Eucharist during the COVID-19 shutdowns has underscored the importance of vocations to the priesthood like never before.

“Without St. John’s, there would be no formation of priests to celebrate the Eucharist and the other sacraments and to lead the faithful in their spiritual journey,” said Father Durazo. “Each and every one of us needs to support our seminary, because the future of our Church depends upon it.

“The origins of the seminary’s annual Gala lie in the critical need of building a deeper awareness of the paramount and profound importance of St. John’s Seminary to each and every Catholic throughout the archdiocese and beyond.”

St. John’s Seminary opened its doors in September 1939 and has seen more than 1,250 men ordained priests. Eight graduates were ordained to the priesthood at the cathedral in early June and eight more are on track for ordination in 2022.

This year’s gala will be the 14th — the first in 2008 was at the Camarillo campus, but it was moved to the Cathedral Plaza for its 75th anniversary in 2015 and has remained there.