Father David Gallardo had a small confession to make at his last Sunday morning Mass as pastor at the Cathedral of Our Lady of the Angels on June 26.

Glancing over at Archbishop José H. Gomez, the priest revealed his initial reservations on taking the assignment back in 2017.

“I’ve shared this with the archbishop — if I would have known only a quarter of the things I needed to do as pastor of the cathedral, I would have told him no, find another priest,” said Father Gallardo in his closing remarks.

“But I didn’t. I said yes. And it was that yes that enabled me to grow in my own discipleship and as a priest. And I will take those blessings and those gifts and definitely use them as I begin my pastorship at St. Ignatius of Loyola in Highland Park.”

With that, the reins pass this month to Msgr. Antonio Cacciapuoti, who that same day was saying farewell to parishioners at St. Bede the Venerable Church in La Cañada Flintridge, where he has been pastor for the last 12 years. 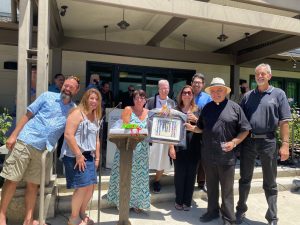 At a June 26 farewell reception, members of St. Bede's Religious Education program presented Msgr. Cacciapuoti with a framed picture of the crucifix he brought to the church, with stained glass windows made from fingerprints of students, catechists, and parents. One of the notable accomplishments during the outgoing pastor's tenure was the raising of $13 million for a new parish hall. (St. Bede the Venerable)

In Father Gallardo’s case, he actually had the benefit of being able to transition into the role more smoothly. He first arrived at the cathedral in 2016, giving him a whole year of preparation and consultation before taking over for Msgr. Kevin Kostelnik, the cathedral’s founding pastor since it first opened in 2002 under the leadership of Archbishop Emeritus Cardinal Roger Mahony.

“I don’t think I realized how much was involved in public relations and the number of interviews I’d be asked to do,” said Father Gallardo, 64, ordained in 1984. A second-generation Mexican-American born and raised in Santa Monica with English as his first language, Father Gallardo said he had anxiety and stress at first doing interviews in Spanish until he became more comfortable.

In particular, he came to appreciate the geographical and cultural diversity of the faithful who’d come to fill the pews of the 3,000-seat cathedral.

“I was able to see the magnitude of the archdiocese as well as get a glimpse of the universal Church with so many cultures and traditions evident with all the different celebrations we would have all the time,” said Father Gallardo, who ministered at several parishes and high schools in the archdiocese before arriving at the cathedral.

Cathedral parishioner Laurie Calderon credits “Father Dave” with enriching her faith — and even her marriage — through his preaching and personal availability.

“I consider him family and I’m so thankful for his friendship and support through some of the most difficult years of my life,” Calderon told Angelus. “I truly believe that Father Dave was chosen by God to be our shepherd during COVID, and he knew that Father Dave was the one who could truly get us through it all.” 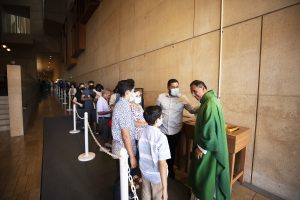 Father David Gallardo says goodbye to parishioners after his last Sunday Mass at the Cathedral of Our Lady of the Angels on June 26, 2022. (Victor Alemán)

His successor considers Father Gallardo a “sweet and gentle man, one of the kindest I have worked with,” during their time together in transition.

“Maybe I don’t know everything that I will face, but I know I’ll have great support because we will have all the tools necessary,” said Msgr. Cacciapuoti, 61, who served in St. Paschal Baylon Church in Thousand Oaks and St. Raphael the Archangel Church in Goleta, before ministering as pastor of Christ the King Church in Hancock Park for 11 years. After that he was assigned to St. Bede’s Church in 2010.

Born in Naples, Msgr. Cacciapuoti studied for the priesthood in Rome and later at St. John’s Seminary in Camarillo. He was ordained a priest of the archdiocese in 1990.

“My goal is to be able to make sure everyone who comes feels welcome, from near or from far away,” Msgr. Cacciapuoti told Angelus. “It is all in the sacrament of being present to people, listening and paying attention, building a sense of community. We want people to feel the spirituality and go home with something to remember.”

At his farewell reception on June 26, St. Bede parishioners presented “Father Antonio” with a collection of goodbye messages.

“Your manner, caring, example, humor and love have been an inspiration to all of us,” read one.

“Thank you for all you have done in making St. Bede such a wonderful parish and helping bring so many Christians into our faith.” read another. 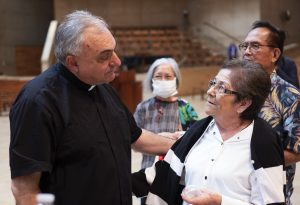 Msgr. Cacciapuoti said he doesn’t feel nervous or worried about the change, but rather  “excited.” One thing on his to-do list: improving his Spanish, which he can “get by on” for now. Another: “Maybe once a year we can do a Mass in Italian,” he quipped. “I think I can make that happen.”

Father Gallardo said his advice to his successor is to be “very, very patient and just know you have a tremendous staff here to assist you.”

“When I first came as the pastor, I was used to doing so many things and it took me a while to adjust to that,” he said.

At the June 26 farewell Mass, Archbishop Gomez thanked Father Gallardo for his “beautiful time” as the cathedral pastor. He reminded those present of the role that the cathedral played during the COVID-19 pandemic, and of the challenges he faced. He also recognized that Father Gallardo’s tenure saw several important milestones, among them the installation of the cathedral’s new Marian tapestry, the launch of the local synod process, the jubilee year and the launch of the ongoing national eucharistic revival.

“You have a special ministry at St. Ignatius of Loyola,” Archbishop Gomez told him. “And you have our prayers in a special way, and our friendship and our support in everything you do.”

Cathedral of Our Lady of the Angels, LA Priests