After 80 years on St. George’s Street in the Los Feliz area of Los Angeles, the parish community St. Casimir Catholic Church has a lot to celebrate.

Most recently the parish, which describes itself as “the sanctuary of Lithuanian immigrants and their families on the West Coast,” witnessed the June 26 reopening of their church after extensive renovations.

Parishioners were joined by a familiar face: one-time parishioner Archbishop Gintaras Grušas of Vilnius, Lithuania, who traveled to Los Angeles to preside at the day’s celebrations.

Born in Washington, D.C., to Lithuanian immigrants, Grušas was an active parishioner at St. Casimir while obtaining his degree in mathematics and information technology at UCLA before working for IBM. Last year, he was elected by his brother bishops as the president of the Council of European Bishops’ Conferences. 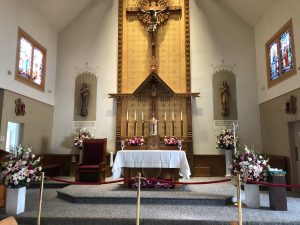 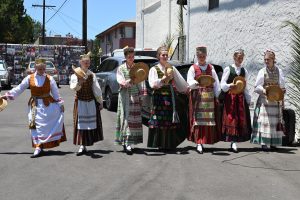 Young people in traditional Lithuanian dress were on hand for the June 26 festivities.

The result was the creation of a space to serve as “a reflection and story of people who fled from Soviet oppression while keeping the faith in their new country,” according to Vidal Aguas, Called to Renew coordinator for St. Casimir.

During the special Mass June 26, Archbishop Grušas dedicated the church’s new altar, reminding the faithful in his homily that “the altar represents Christ, where the community participates in the sacrifice of the Mass and where we are invited in thanksgiving to the table of the Lord.”

The church’s grand reopening was scheduled to coincide with the fifth anniversary of the beatification of Blessed Teofilius Matulionis, a predecessor of Grušas as archbishop of Vilnius and the first recognized Catholic martyr under Soviet occupation of Lithuania.

A new mural honoring the martyred archbishop was also unveiled during the June 26 festivities. Called the first of its kind outside Lithuania, the mural of Blessed Teofilius was designed by Mexican-American artist Lalo Garcia, with tiles sourced from Uriarte, a 200-year-old manufacturer in Puebla, Mexico.

Other new items of sacred art include a map of Lithuania superimposed with images of six holy men and women with connections to the country, including Saint Faustina Kowalska and her spiritual director, Blessed Michael Sopocko, who met while the nun was assigned to a convent in Vilnius. 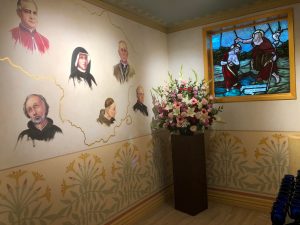 St. Casimir unveiled a map of Lithuania with images of six holy men and women with connections to Lithuania.

The church also allows the faithful to make a spiritual pilgrimage to the Lithuanian “Hill of Crosses,” the site of thousands of crosses left by pilgrims and artists in remembrance of the dead. Despite several attempts by the Soviets to destroy the place of prayer, the Hill of Crosses continues to be a place of hope and healing for pilgrims to Vilnius and is listed on the UNESCO Intangible Cultural Heritage List.

Each of these new pieces of sacred art serve as a celebration of the community’s history, but for Aguas they are also a reminder of the faithfulness of Catholic Lithuanians in the face of turmoil caused by the ongoing Russian invasion of Ukraine.

“We pray that [Lithuanians] do not suffer religious persecution again, as Ukraine defends its freedom,” he said. “Ukraine and Lithuania were both under Russian occupation.”Ar