SoCal’s newest basilica is ready to show off its makeover

Since being named a minor basilica by Pope Francis last summer, Mission San Buenaventura has been quietly getting a major makeover.

Now, thanks to the completion of some key projects and the lifting of a statewide ban on indoor worship due to COVID-19 restrictions, visitors to Southern California’s newest basilica will finally be able to enjoy some of its aesthetic upgrades in time for Lent.

Among the upgrades is a new lighting system to replace the one used in the basilica since the 1980s.

The LED energy efficient theatrical enhancements “create a spiritually uplifting appreciation of the basilica’s sacred paintings, statues, and tapestry, some of which predate the completion of the 1809 church,” said Father Tom Elewaut, the mission basilica’s pastor, who noted that the project has been in the works for the last five years.

The lighting system received funding from the archdiocesan Called to Renew development campaign. Also completed in recent days was the installation of a new sound system.

Progress is also being made on the series of symbolic upgrades that are specific to papal basilicas. The insignia of the Papal Cross Keys, meant to symbolize a minor basilica’s link to the pope’s four major basilicas in Rome, now rest above the entrance to the Spanish mission building. A bell mounted on a pole, known as the “tintinnabulum” (similar to that used during the Middle Ages to signal the pope’s approach) is now on display in the mission church’s sanctuary. 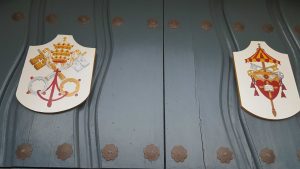 The papal insignia and Mission San Buenaventura's coat of arms have been placed on the mission's doors. (Fr. Tom Elewaut)

A cone-shaped canopy traditionally placed over the lectern of a basilica, an “ombrellino,” is expected to arrive shortly, Father Elewaut told Angelus.

The announcement of the mission’s promotion to the rank of minor basilica was made public on July 15 of last year, coinciding with the feast day of the mission’s namesake. It is the first basilica in the Archdiocese of Los Angeles and the 88th in the United States.

The Mass marking the announcement that day was celebrated by Archbishop José H. Gomez not in the basilica itself, but in the mission’s garden. Just a few days before, California had banned indoor worship due to a rise in COVID-19 cases at the time.

The completion of the upgrades has not only coincided with the beginning of Lent, but with the lifting of California’s ban on indoor worship.

Like some other parishes in the archdiocese, Mission Basilica San Buenaventura reopened its church doors on Ash Wednesday at 25% capacity, or 70 people, although worshipers are still welcome to attend Masses sitting in the mission garden and receive the Eucharist at the end of Mass. 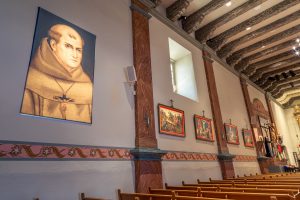 Also being added to the mission’s schedule are times for adoration and benediction, Stations of the Cross, and a third English Mass on Sundays due to capacity Mass crowds last weekend.

The new lighting system is composed of 12 different “light stations,” which may offer “variant degrees of intensity covering 16 different scenarios” depicting some of the mission’s most prized artwork, Father Elewaut said.

The mission’s pastor said that the excitement of the new basilica’s added touches have been a welcome blessing for parishioners after a difficult year.

“Parishioners who have come to visit have seen the progress of the lighting, which is extraordinary compared to what we had for over 40 years,” said Father Elewaut. “Some have said the basilica is now a sacred museum.”

Visitors will have a chance to view the new lighting at an open house following COVID-19 health and safety regulations this Sunday, Feb. 28, from 1 p.m. to 4 p.m., the basilica announced.