The private liturgies began in early May after the Archdiocese of Los Angeles secured  permission for the liturgies at the Long Beach Convention Center and the Pomona Fairplex.

“My heart breaks for what these children have been through, and I want to help them any way I can,” said Los Angeles Auxiliary Bishop David O’Connell, who celebrated the first Sunday Mass for newly arrived children in Pomona on May 9.

Speaking to Angelus before the Mass, Bishop O’Connell said he looked forward to preaching about becoming a friend of Jesus.

“Many [of the youth] have been through difficult times. Jesus invites each one with a friendship with himself.”

The unaccompanied migrant children began arriving at emergency shelters set up in Southern California in April following an influx at the U.S.-Mexico border.

The first group of children arrived April 22 at a temporary shelter set up at the Long Beach-owned convention center, one of several set up by the U.S. Dept. of Health and Human Services.

The Long Beach facility is expected to house children fleeing gangs and poverty in their native countries. Officials have described the shelters as temporary pit stops for kids awaiting custody of sponsors or family members in the U.S.

The archdiocese had worked for weeks to secure permission to celebrate Sunday Masses for the migrant children.

“It’s most important,” said Isaac Cuevas, director of Immigration and Public Affairs for the archdiocese, of the decision.

“It recognizes the human dignity in every one of these children. To go through what they’ve been through takes a tremendous amount of courage,” said Cuevas, who also serves on the Southern California Immigration Task Force. “They can come together, celebrate Mass, and know that they’re in the presence of God.” 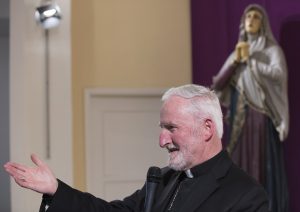 Bishop David O'Connell is among the several LA priests who have celebrated Mass at local federal shelters for unaccompanied migrant children. (Victor Alemán)

The first shelter Mass was celebrated in Long Beach on Saturday, May 1, by Msgr. Jarlath Cunnane, better known as “Father Jay,” pastor of St. Cornelius Church in Long Beach. Auxiliary Bishop Marc Trudeau of the archdiocese’s San Pedro Pastoral Region, celebrated Mass for another group of kids the next day.

“I do look forward to it,” said Father Wardhana. “I came to this country for political asylum from Indonesia. So I understand how they feel.”

Children at the Pomona Fairplex have been given access to several soccer fields, as well as lounging areas with toys and books, in addition to classes, mental health services, health care and translators. Reunifications are happening quickly and safely, shelter officials say, with more than 80 youth and children having been connected to family and loved ones in the U.S. so far.

In the meantime, those children still waiting now have a special moment to look forward to on weekends.

O’Connell, who is chairman of the immigration task force and oversees the archdiocese’s San Gabriel Pastoral Region (where the Fairplex is located), focused his homily at the first Mass held at the Pomona Fairplex on the Gospel of John, and the beauty of having a personal friendship with Jesus.

“I will talk to the kids like we did the kids of South Central, if they’re feeling traumatized, and anxious,” he said. “Talk to Jesus, invite him into your heart, to walk with him, and he will help you.

“Jesus can lead them, step by step, to a better life.”