Sights, sounds, and signs of life at OneLife LA 2022

It is easy to remain in a jaded rut over the current state of what some refer to as today’s “culture war.”

But then God sends us little messages to keep us grounded. He must think we need constant reminders, given that the phrase “fear not” or “be not afraid” appears more than 100 times in the Old Testament and over 40 times in the New Testament.

There was no fear to be had as I arrived early to the 8th annual OneLife LA march for life. After a couple of days of vicious Santa Ana winds, the morning was clear, calm, and full of anticipation.

The Knights of Columbus, regaled in their dress uniforms and black berets, beat me to the location, as did the Knights of Malta. Tables started going up, hats and T-shirts were offered for sale. 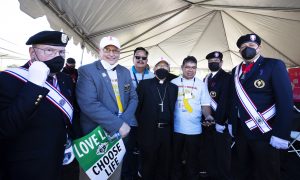 The signs were everywhere: Many of them mass-produced and distributed by event staff, depicting the spectrum of life issues being championed on this day. Other signs were of the homemade variety, but the messaging was consistent, stressing dignity and respect for life at all its stages. It seemed fitting, I thought, that the beginning of OneLife LA was taking place on the same site as the birthplace of Our Lady’s City.

As the days Youth and Young Adult event kicked off, Placita Olvera filled with energetic high schoolers and college students. They came from places like San Bernardino, San Diego, and even as far as Fresno, as well as all corners of the Archdiocese of Los Angeles.

Mila, Victoria, and Janely looked like high school girls. I found out they are students at Azusa Pacific University. These young women were from divergent backgrounds but met and found common bonds at Azusa Pacific’s Catholic Club. They each had fists full of pennants emblazoned with this year’s OneLife LA theme, “Forward in Hope.” They all professed to identifying with the pro-life cause as far back as they could remember, guided by the values transmitted by parents and the Church.

Victoria, a senior at Azusa Pacific, had a mission to accomplish and being part of OneLife LA today was an important part of it. 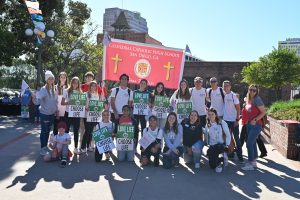 “I want to prove I don’t have to choose between family and career because all things are possible with God,” she said. “And it’s important for a woman who may be thinking about abortion to know that a person isn’t defined by their circumstance.”

It was hard not to notice the contingent from John Paul the Great University in Escondido when they showed up. Several dozen were there, carrying flags, a couple of large crucifixes, and enough energy to power Santa Monica for a week. Their enthusiasm was such that I wondered aloud what college students who held a different view of life issues might think if they came across this group.

One of the students, a young man named Luke, had an answer of his own.

“If they came to hang out with us, I think a lot of their pre-conceived ideas about what it means to be pro-life would fade away. They’d see a lot of joy and a bunch of people who just love humanity.” I couldn’t argue with that.

As it got closer for the OneLife LA walk to begin, members of a different demographic group appeared.

Keith and his wife Gina, together with nine-year-old daughter Hannah, had come up from Long Beach, where Keith is a Grand Knight at a local Knights of Columbus chapter. Gina volunteers her time with her home parish’s outreach program to single moms, and Hannah is learning from an early age what pro-life is all about. They were going to walk as a family in OneLife LA, like they had done twice before.

Looking at the bright and joyful Hannah made me think about the college students I had met and that they were probably a lot like Hannah is now: perhaps not fully aware of the grimmer aspects of the abortion industrial complex but knowing innately that babies need to be protected.

As Hannah reminded me, “we have to pray for the mommies.” 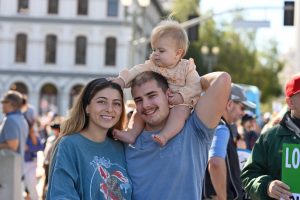 The walk was mostly uneventful, and not in the way the maiden voyage of the Titanic was mostly uneventful, thanks be to God. I was a little concerned after reading about what “Catholics for Choice” (George Orwell wants an apology) did at the Basilica of the National Shrine of the Immaculate Conception in Washington, D.C., earlier in the week. Thankfully, there were no projections of evil messages about the goodness of choosing to terminate an innocent life. It was slightly unnerving and I may have even muttered “be not afraid” under my breath when the drone hovered overhead.

“It’s one of ours,” a fellow walker quickly reassured me. I relaxed.

As there seems to be every year, there was a small faction of guests who weren’t exactly happy to see us. But once out of earshot of the bull horns, things returned to normal. I joined in with the decades of the rosary, and heard some beautiful singing in various segments of the long line of walkers.

When walkers filtered into the LA State Historic Park for the music and the speakers, I saw more signs. One of the DIY signs was being held up by a mother-and-daughter pro-life team. The sign was the daughter’s idea. Her name was Elizabeth. She was a freshman at Holy Rosary High School in Fullerton. Her teacher asked her to produce some pro-life signage and she remembered a slogan she saw on social media: “My salvation began with an unplanned pregnancy.”

She seemed a little guilty she had “borrowed” the slogan but the truth of the sentiment, and it being “held up” so steadfastly by a young person barely out of grammar school, was no less inspiring.

There were likewise inspirational speakers, but in all honesty the stars of the show were all the individuals who were one with their message. They are the pro-life movement, they animate the faith, and embody the “Forward in Hope” motto of this year’s OneLife LA event.

There were also other focus areas during the day such as human trafficking, homelessness, immigration, and protecting the environment – all connected to the issue of life for certain. 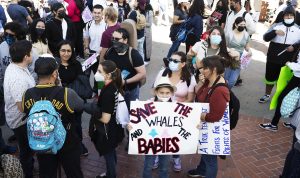 But what little Hannah and her parents knew; what college students Victoria and Luke knew, and what high school freshman Elizabeth understood, is what St. Pope John Paul II also knew and expressed so profoundly: “The common outcry, which is justly made on behalf of human rights — for example, the right to health, to home, to work, to family, to culture — is false and illusory if the right to life, the most basic and fundamental right and the condition of all other personal rights, is not defended with maximum determination.”

Determination was in great abundance at this year’s OneLife LA event. Thanks to young and old, layperson, priest, bishop and religious sister, the future is hopeful and the future is pro-life.